Bono and U2 share message of unity during Atlanta concert

So I got another dose of Bono tonight. A U2 show is always special, but I must admit that this was my least favorite of the four U2 concerts I’ve been to.

That said, a U2 concert brings a wonderful blend of music, political and social consciousness, and a camaraderie of concert-goers of all ages. Bono — with his music, his words and his persona — exudes love, hope, peace, freedom and an end to poverty.

Tonight Bono’s cause was to free Aung San Suu Kyi, a 64-old-woman who has been under house arrest in Burma for the past 14 years. Her confinement will last another 18 months because she allowed an American to stay at her home.

In one of the most moving moments of tonight’s performance, dozens of concert-goers walking along the circular walk wearing Aung San Suu Kyi face masks. As they walked, Bono and U2 were singing one of my favorite songs: “Walk On.”

The stage set up resembled a giant space ship that had a 360-round projection screen showing close-ups of the four members of U2 while they played. I still couldn’t figure out how that was technologically possible.

Another high point was when a video-taped Desmond Tutu shared Bono’s message of “One,” a world united by a common goal of peace.

Where we were sitting (high up in the nosebleed section), the sound was often muffled, and it was hard to hear the words when Bono sang.

That was not true when Bono spoke to his fans. It’s obvious that when Bono comes to Atlanta, the first person he thinks of is Martin Luther King Jr. For Bono, King was his inspiration.

In January, 2004, Bono was honored at the King Center’s Salute to Greatness dinner. Although many present had not been aware of Bono and U2’s fame, they were totally enthralled with Bono’s messages of how Atlanta must expand its civil rights tradition to the continent of Africa. Bono has made the development of Africa the centerpiece of his global reach. 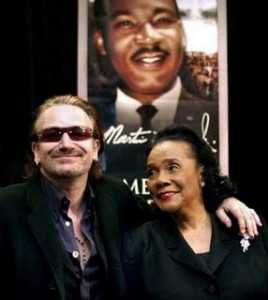 At that dinner, Bono also talked about how King had influenced his life and his music. It’s was King’s message of non-violence that really helped Bono understand the way to resolve the civil conflicts in his home country of Ireland. Click here for a related post.

But seeing and hearing Bono helps keep their message alive with his messiah-like quality that naturally attracts fellow followers.

Thank you Bono for your music, your show and your message of One.