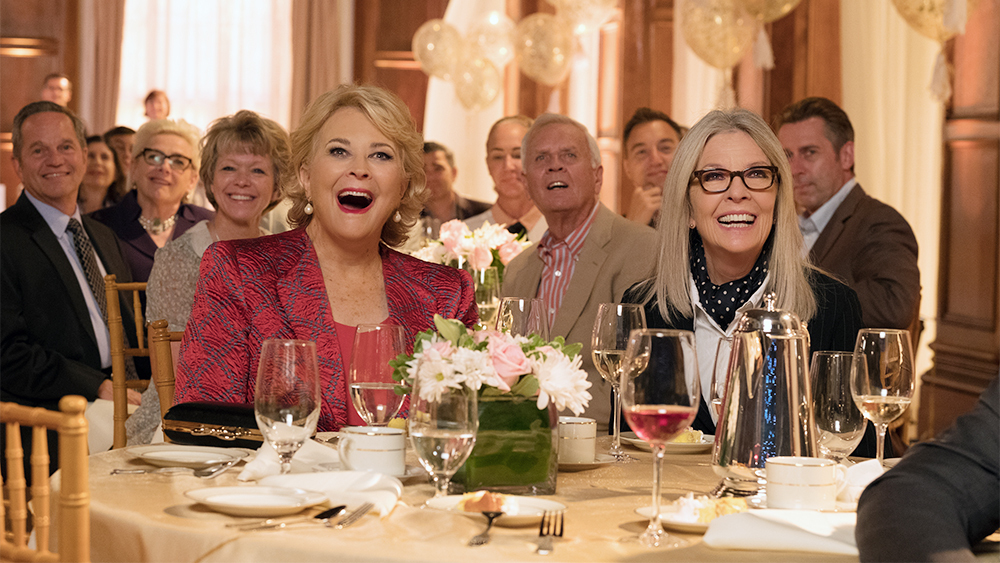 I can’t answer Freud’s infamous and condescending query, “What do women want?”

But I know one thing we don’t.

It’s hard to say which is more nauseating, the movie itself or the cloying reviews that suggest your mom will just love it, especially with a nice glass of chardonnay.

“Book Club” is about four friends who meet monthly, ostensibly to talk books, but really to catch up and — when one of them suggests the  “risqué” (gag) “Fifty Shades of Grey” — to talk about their sex lives. 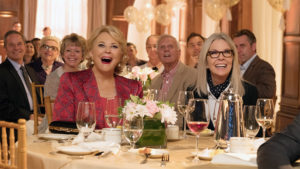 Vivian (Jane Fonda) is a high-powered (read, neurotic) hotel owner who — wink, wink — has plenty of sex, but never sleeps with any of her male conquests. Commitment issues?

Diane (Diane Keaton) is a recent widow whose commitment issues concern her adult daughters. They are “committed” to moving mom to Arizona where they live.

Carol (Mary Steenburgen) is, we’re told, a famous chef. Maybe so, but nothing’s cooking between her and her husband (Craig T. Nelson). He’s in a double-entendre-heavy relationship with his motorcycle which translates into a lot of — wink, wink (again) — talk about revving up old engines.

And Sharon (Candice Bergen) is a judge who divorced her husband (Ed Begley Jr.) 18 years ago and really hasn’t thought much about sex since. But all that, um, “racy” (gag) stuff in “Fifty Shades” has her re-thinking how to use handcuffs. Or at least the idea of online dating.

Here we have a quartet of iconic actors — women whose credits include such groundbreaking classics as “Klute,” “Annie Hall,” “The Godfather,” “The China Syndrome,” “Manhattan,” and “Reds.” Whose on-screen presence in a film signified challenge and change.  Even cult films like “Melvin and Howard” and “Time After Time” or mixed blessings like “The Wind and the Lion,” “Ragtime” and “Carnal Knowledge” were worlds away from the sort of ‘50s and early ‘60s pabulum that manifested itself in so-called “women’s pictures,” i.e., “Three Coins in a Fountain” and its ilk.

And yet here they are in a movie that could be titled “Three Bit Coins in a Fountain.” Yes, they have wrinkles (daring!) and, in some cases, jobs. But mostly, despite the post-feminist trappings, it’s the same-old, same-old.

Let’s not do this time warp again.

“Book Club” has its moments. Andy Garcia is very effective as a dreamboat fantasy — an independently wealthy pilot who finds Keaton’s every twitch and stutter adorable (actually, we do, too, though essence of unfiltered Keaton can be occasionally trying). 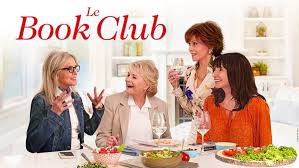 And — Keaton again — the over-doting daughters storyline is hilarious. Especially when they tell her they have a lovely basement waiting for her whenever she gets ready to sell her house. Not only is there a walk-in tub, but “everything is slip-resistant.”

Fonda and Steenburgen fare less well. Fonda graciously makes fun of her cosmetically too-perfect body, but her voice is still that of an old (er) woman and her love interest, alas, is Don Johnson with whom she has less than zero chemistry.

There’s little chemistry between Steenburgen and Nelson either. Plus they’re stuck with a bad Viagra gag that might’ve been part of a “Love Boat” episode (if they’d had Viagra then).

Surprisingly, the one who fares best is Bergen. Arguably, she has the least impressive film career of the four, but her Emmy-winning years on “Murphy Brown” must’ve honed something. Or maybe it’s just that sitcom skills are the best weapon against the “Book Club “ script.

Whatever the reason, she’s smart, wry and credible. If someone decides to make a sequel — or, more likely — a TV series out of this mess, her character would be the most fun to follow.

Otherwise, “Book Club” is beyond embarrassing.

Especially for those of us who grew up with “Bonnie and Clyde” and “The Graduate” only to be told — if this movie is to be believed — our future was “The Glass Bottom Boat” all along.

But with that nice glass of chardonnay. Lucky us.