First things first about the daring and absolutely hilarious “Borat Subsequent Moviefilm: Delivery of Prodigious Bribe to American Regime for Make Benefit Once Glorious Nation of Kazakhstan” – (hereafter to be known as “Borat 2”).

Yes, everything you may have heard about the Rudy Giuliani interview in a hotel room with a teenage reporter is true.

No, I don’t think he was tucking in his shirt. 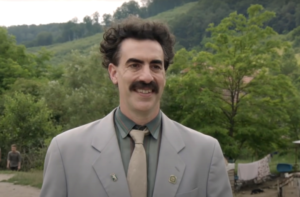 Just mentioning that scene probably needed a spoiler alert, but then, so much of “Borat 2” is so brilliantly laugh-out-loud funny that simply writing about it pretty much calls for one big spoiler alert.

Since we last saw him in 2006, Borat (Sacha Baron Cohen), the racist, sexist, anti-Semitic, blithely perverted, dim-witted, monomaniacal journalist from Kazakhstan, hasn’t been doing so well. His last visit to America ended up with his being sentenced to hard labor in a gulag.

But now his country has a new mission for him. Incensed that President Trump doesn’t treat him with the same respect he extends to other world leaders like Putin and Kim Jong-un, Kazakhstan’s head of state wants Borat to help him attain that status. Hence the “bribe” referred to in the title.

Before leaving, Borat stops off at his home village, only to discover his wife has left to make “sexy-time” with someone else. About all that’s left is the livestock: two pigs, a cow and his 15-year-old daughter Tutar (Maria Bakalova, excellent). Embarrassingly, at 15, she is the oldest unmarried woman in Kazakhstan.

Borat’s mission goes awry early and his fallback plan is to offer a willing Tutar to Vice President Pence. It’s a sure bet, Borat figures, because Pence is so sex-crazed he won’t allow himself to be alone in a room with a woman who’s not his wife.

In a sense, this is what I meant by the spoiler alert warning. The jokes, the situations, just the overall insanity are so pervasive that all you want to do is pass them along. 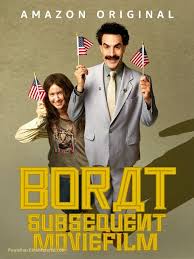 A movie poster for “Borat 2”

Like the visit to a bakery where a sweet-faced little lady happily puts “Jews will not replace us” on a birthday cake. Or Borat brandishing the state-issued (by the Kazakhstan Ministry of Agriculture and Wildlife) “Daughter Owner’s Manual.” Or when he patiently explains to Tutar that a father can’t possibly love his daughter as much as his sons because he’ll be sentenced to death.

And I don’t think I can even go into the fertility dance the pair performs at a debutante ball in Macon (it’s tied to Tutar’s monthly “moon flow”).  Or what ensues at a so-called Women’s Health Center after Tutar has accidentally swallowed a tiny plastic baby on the cupcake Borat has bought her (“I put it in her” Borat says apologetically to the appalled pro-life pastor, admitting he is also Tutar’s father).

However, the most jaw-dropping moments are the non-scripted scenes, the ones where America hoists itself on its own petard, so to speak. There is admittedly a gotcha element in the aforementioned Giuliani interview, but not so in a visit to a Pence rally (in February, I think) where the Vice President assures supporters the pandemic isn’t going to get all that bad.

“Borat 2” has its problems, the most obvious (inevitable?) one being that Cohen/Borat has become incredibly famous since 2006 and so recognizable that he often has to use disguises as he did on his TV series. Secondly, he’s lost the element of surprise. In 2006, I’d heard of Borat, but had never seen him in action.

Finally, satire can often be one-note. The tone Cohen strikes here is admittedly brilliant, but it doesn’t change. I have no idea how he’d do it, but the movie would benefit from some sort of structure. Instead, it comes off as a series of loosely-connected sketches, which was fine with me, but may not be for everyone.

Still, “Borat 2” is one of the few bright spots of 2020. One of the brightest, actually. I can’t wait to watch it again.