As ground breaks for new Braves park, risk rises for men of iron 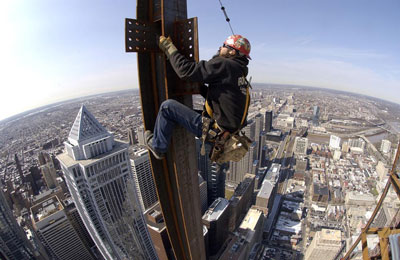 Ironworkers built Atlanta’s skyline. They face one of the highest risks of death of any occupation. Credit: Ironworkers Local 387.

Last week, officials with Cobb County and the Atlanta Braves broke ground on SunTrust Park. Their shovels were a sign of excitement and new birth, but they also recalled the grave dug for a man who died in a construction accident on the old stadium.

Jack L. Falls died in March 1995 when a light tower he was working on collapsed at the Olympic Stadium, which became Turner Field. An engineer had miscalculated the load that the tower could bear, and according to a state investigation, did not tell anyone about the error.

According to a 2013 CNN report on dangerous occupations, falls are one of the most common causes of death for ironworkers. They also die when beams or concrete walls collapse or when struck by falling or swinging objects. Live electrical lines are another problem. The report said that 37 of every 100,000 ironworkers are killed, a rate exceeded only by loggers, fishers, airplane pilots and roofers.

Observant Braves fans might have seen his memorial at the top of Aisle 243. “That plaque was a piece of Jack being there and being proud of what he did,” said his sister, Lynne Falls Shriber. “Jack died so others would be alive. If that tower had fallen with everyone at the Olympics, it would have been disaster. He sacrificed his own life.” 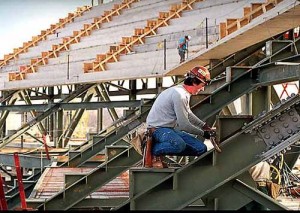 With the future of Turner Field in doubt, would Falls be forgotten too?

That granite marker was saved recently, and the story involves another Jack—a little terrier with a big medical issue—and a sister determined to keep Falls’ legacy intact.

Because they defy height and injury on a daily basis, their international union’s website calls them “cowboys in the sky.” Falls wasn’t all daredevil though. He grew up near the border of DeKalb and Henry Counties, off a dirt road where “people would always put out their unwanted puppies and kittens,” his older sister Lynne Falls Shriber, now 56, recalled. “We were always rescuing animals.”

After Jack died, his sister got more involved in animal rescue. She married, and moved to a 14-acre property in Snellville with a lake and barn that was owned by her husband’s family. She set up a 501c3 nonprofit called Little Nuggets Rescue because it focused on small dogs—mostly Jack Russell terriers.

In 2012, Shriber rescued a Jack Russell that had been hit by a car and mangled its back leg. Months had gone by before she took ownership of the dog, named Comet, and by then, the leg was badly infected. Her veterinarian told her the expenses would be close to $1,000.  A Girl Scout leader in Dunwoody who had adopted a dog from her put a notice about Comet in the Dunwoody Crier, which caught the attention of a reporter at WXIA, the NBC affiliate in Atlanta.

“People gave $1100 in two days. It was awesome,” Falls Shriber said. The money paid for Comet’s amputation, and Comet lives with her today, part of a menagerie of 17 dogs, nine cats and two rabbits. 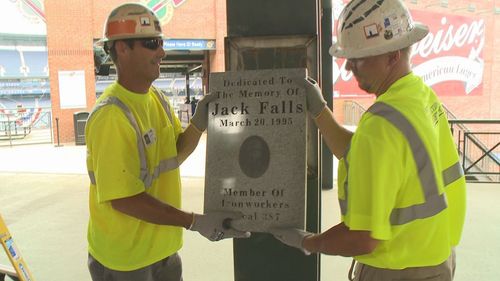 Ironworkers Local 387 helped remove the plaque for Jack Falls from Turner Field, at the top of Aisle 243. (Photo courtesy of Jackie Falls).

The Falls family had never been to Turner Field, which was created in 1997 from the shell of the Olympic Stadium. When Falls Shriber’s husband got free tickets through his union (IBEW), she said she had to force herself to confront bad memories.

“I never wanted to go there, but I thought, ‘Let’s do this,’” she said. Seeing where her brother died “took my breath away, and made me nauseous. I didn’t know if I could do it, but I went straight to the plaque.”

Last November, the Braves announced the team would move after the 2016 season to a new stadium in Cobb County. Falls Shriber got a call from her mom Jackie, now 76, who lives in Gainesville. 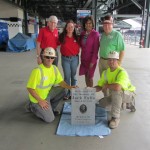 Lynne Falls Shriber (in red shirt) received help from Bill Liss of WXIA and the Ironworkers in retrieving the granite marker for her brother. Its future was in doubt because the Braves will leave Turner Field after the 2015 season for a new ballpark in Cobb County. (Photo courtesy of Jackie Falls)

They’re going to tear down the stadium and it breaks my heart to know that plaque is there, she told Falls Shriber. I wonder if we can get it.

I’m on it, her daughter said.

Who would help her? For months, Mayor Kasim Reed’s office was not responsive, so she turned to her friends in the media who had helped her Jack Russell issue. This time was more significant. This was her brother Jack.

WXIA’s Bill Liss located help right away, and Ironworkers Local 387 assisted with taking down the plaque.

“If that plaque was gone with the old stadium, a piece of Jack would be gone,” Falls Shriber said. “It would be another heartbreak.”

Every Christmas since 1995, the Falls family has discussed with resolution what to do about Jack’s final resting place at Fairview Memorial Gardens in Stockbridge. There’s a small plaque there, but that was only a placeholder.

Now the solution is clear: take the granite ballpark plaque and make it into a monument. It should be done sometime before Christmas, his sister said.

Previous Article
Business Pulse: How CDC Protects the Health of Your Business at Home and Abroad
Next Article
The Home Depot piloting the ‘Do-It-Yourself’ automotive business