STEM students from Brazil will study at Georgia State University, following GSU’s selection by Brazil to participate in the country’s new effort to strengthen its domestic economy by better educating its young people.

Brazil sent 591 college students abroad in January in the first wave of its attempt to reduce the country’s skills shortage in the STEM areas of science, technology, engineering and math. Brazil’s government plans to eliminate financial barriers to higher education by paying all costs to send about 100,000 students abroad for a year, 20,000 of them to the U.S. The students are to return home to finish studies and start careers in Brazil.

“This will definitely be a big boost for us because it solves one of the main problems international students have, which is affording tuition,” said Earl Picard, director of strategic planning and development in GSU’s Office of International Initiatives.

In addition, Brazil’s “Science without Borders” student exchange program fits into initiatives in both Brazil and the U.S. to foster economic growth and trade between two countries whose relation has been described by the BBC as “broad but shallow.” 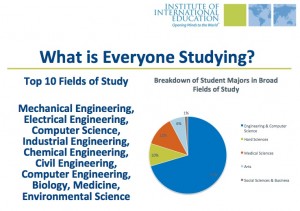 The strain increased this year, when Brazilian President Dilma Rousseff visited the U.S. Rousseff met with President Obama at the White House, but did not receive a state dinner or other state functions that were hosted for leaders of India and China.

Click here to see a larger version of the chart to the right.

The U.S. sees Brazil as a potential well for new students to offset the nation’s sagging share of the international education market. Overall foreign enrollment is up, compared to 2000, but the U.S. share of the international market has dropped from 28 percent to 20 percent as countries including China, Canada, Britain, Australia, France and Japan have increased enrollment, according to a report in reuters.com.

Rousseff initiated “Science without Borders” as part of her effort to foster a vibrant economy and inclusive educational opportunities for all students. Brazil’s legislature adopted the program after Obama’s visit to Brasilia in March 2011. 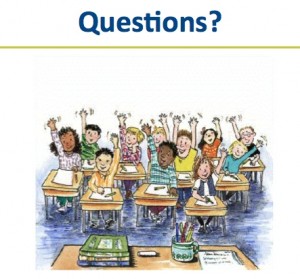 A playful sketch in Brazil’s pamphlet about the study-abroad program invites students to ask questions.

“This ambitious initiative aims at strengthening Brazil’s capacity to compete in this century, in which innovation will play such a crucial role,” Ribeiro said. “Partnering with American institutions, such as GSU, which offers strong coursework in some of the main fields of the program, will undoubtedly be of paramount imporantance to achieve the ambitious programs set fort by President Dilma Rousselff.”

In the age of the Internet, the program offers to provide residual effects, as well, Ribeiro said.

“Brazilian and American students will have an opportunity not only for mutual cultural enrichment, but also to be able to network in the future, thanks to the social media revolution we are all witnessing.”