The reopening of Mitchell Street Bridge Viaduct in Downtown Atlanta is a gentle reminder of how slip-ups in 1994 delayed the project for almost two decades. 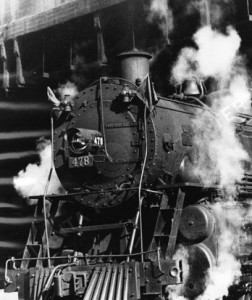 A Central of Georgia locomotive passes beneath the Mitchell Street Bridge Viaduct in this undated photo. Credit: Atlanta History Center

The bridge was slated to be replaced with proceeds of a $149.9 bond referendum that was to have been on the ballot in March 1994. The money was to repair the city’s infrastructure before the 1996 Olympic Games.

Atlanta botched some technical aspects of the bond proposal, and Sandy Springs attorney Bob Proctor convinced a Fulton County judge to order that the bonds couldn’t be sold even if voters approved the referendum. By the time the bond was repackaged and the referendum passed, in June instead of March, it was too late to fix the bridge before the Games and the job was deferred.

The bridge, which the state Department of Transportation says was built in 1924, continued to decay.

In 2000, the bridge’s safety rating was downgraded so that the maximum vehicular weight was 3 tons, according to a history of the project compiled by the city.

On Jan. 27, 2004 the state recommended the city immediately close the bridge. But the bridge was patched and left open to serve cars and small pickup trucks.

Four years later, the situation was beyond repair.

The state ordered the bridge closed immediately on March 14, 2008. The city’s report on the project describes the situation:

In 2009, the city entered an agreement with the state Department of Transportation for the state to replace the bridge, and for Norfolk Southern to provide access to its right-of-way.

The $8.8 million project was completely funded by the federal stimulus program, the American Recovery and Reinvestment Act of 2009. Archer Western Contractors, Inc. delivered the project ahead of its planned Aug. 31 opening date.

This is what Emory McClinton, Atlanta’s representative on the state Transportation Board, said during the ribbon-cutting event for the new bridge on Aug. 23: