We still have work to do to make it easier for food trucks to operate. The permitting process can seem mysterious and subjective. Existing city contracts limit our ability to open streets and sidewalks to this new group of mobile entrepreneurs.

All in all, though, we are moving in the right direction. 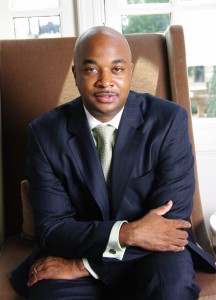 As the next wave of budding street food vendors surveys the horizon for opportunities, I would point them to Atlanta’s food deserts, those neighborhoods without access to fresh produce and healthy prepared foods.

A new study from the Food Trust shows that nearly two million Georgia residents – including 500,000 children – live in low-income neighborhoods where there is little or no access to supermarkets.

Georgia ranks 4th nationally in the production of vegetables, yet the food insecurity rate among kids is the 5th highest in the country, leaving 700,000 kids without access to enough nutritious food to lead a healthy, active life.

Add it all up, and Georgia is left with the nation’s 2nd highest obesity rate among kids 10 to 17, thanks in part to heavy consumption of the food that does tend to be accessible – what the Centers for Disease Control calls “high-energy-dense food,” or high-calorie foods, heavy with fat and sugar.

It is in these driest of food desert neighborhoods, where traditional supermarkets will not invest, that the most creative ideas are playing out in urban areas across the United States.

New York City’s Green Carts program licenses about 400 street vendors to sell whole fresh fruits and vegetables – and nothing else – in neighborhoods not served by grocery stores. A new documentary, the Apple Pushers, features a few of the peddlers. The film will have its Atlanta premiere during the Atlanta Jewish Film Festival in February, 2012.

Kansas City has its version of a rolling market, led by the nonprofit Beans & Greens, selling fresh vegetables, meat, and dairy.

In Washington, D.C., the nonprofit Arcadia Center is retrofitting a school bus – which will run on biodiesel – with freezers, refrigerated compartments and shelving. It will serve as a mobile farmers market during the growing season and in other months as an education tool for the district’s Farm to School Network.

Philadelphia has introduced fresh produce at nearly 600 corner stores, which became a priority when research revealed that about 3 in 10 students were visiting the stores twice a day, five days a week – consuming a pound worth of additional calories every week from chips, sodas and candy. 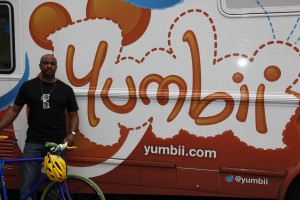 Kwanza Hall in front of a food truck

In the Old Fourth Ward neighborhood, which I have the privilege of representing, the first growing season at the Truly Living Well Wheat Street Garden has provided convincing support for converting vacant urban property into organic farms that create both jobs and food. This four-acre experiment in urban agriculture, the largest of its kind in the city, is made possible through the visionary leadership of Wheat Street Baptist Church. I can’t help but think how pleased its founder, the Rev. William Holmes Borders, would be of this community-based economic development initiative.

The garden holds a special place in my heart because it overlooks the original headquarters of the Southern Christian Leadership Conference, where my now deceased father, Leon Hall, worked with Martin Luther King Jr. during the civil rights movement.

Through its Farm to School Network, Georgia Organics is promoting innovations that re-connect Georgia schoolchildren to apples, sweet potatoes, collards and other selections grown right here in Georgia.

Fulton Fresh, the county’s cooperative extension version of a food truck, distributes locally grown produce with staff delivering healthy cooking demonstrations and nutritional education. During the summer, Fulton Fresh provided more than 900 residents with more than 10,000 pounds of fresh fruits and vegetables, focusing on food deserts in the West End, Bankhead Highway, Palmetto and Collier Heights communities. Thanks to a new grant from the Atlanta Falcons Youth Foundation, Fulton Fresh will be increasing delivery to eight sites in 2012.

We need to support these and other innovations in Atlanta. Our challenge is not to mimic something from another city but to be entrepreneurial in the pursuit of win-win ideas for our city, where we are supporting local agriculture jobs and increasing access to healthy food.

As Joel Berg recommends in his Progressive Policy Institute report of 2009, food should be a “central organizing principle” for neighborhood development. Food, he says, has the ability to bring residents into greater community with each other. It promotes healthier living. Urban agriculture reclaims vacant property from drug dealers and criminal elements. It creates jobs.

If you share my vision of an Atlanta in which no resident lives in a food desert, I want to hear from you. My email is: [email protected] or on twitter: @District2ATL.

Let’s unleash the power of the private, entrepreneurial sector to do public good.