Brookhaven is continuing its effort to improve parks and greenways in metro Atlanta’s newest city. 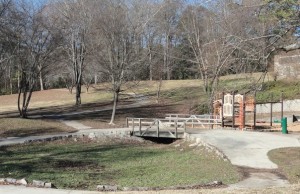 Brookhaven Park is one of three parks that are the subject of upcoming meetings on improving Brookhaven’s parks and greenspace. Credit: atlantafurnituremovers.com

Brookhaven residents have identified walking trails and rest rooms in parks as their top priorities in parks development, according to the master parks plan completed in September. The next step is to review three specific parks.

Brookhaven has scheduled visioning sessions this month and next for Ashford, Skyland and Georgian Hills parks. The goal is to create development plans for each park that can be presented for funding consideration to the city’s parks department and the Brookhaven City Council.

The parks master plan acknowledges the limitations of city resources. It calls for Brookhaven to, “seek grants and leverage existing funds as potential matches;” and to, “develop a fees and charges policy.”

Those issues will be addressed in the future.

In the meantime, the Comprehensive Parks and Recreation Master Plan establishes some benchmark issues that Brookhaven residents want to have available in their city – which some felt were ignored by DeKalb County.

When residents voted to incorporate Brookhaven in 2013, the issue of parks and recreation was a top motivator for some voters. Some felt that DeKalb County was not providing the level of service they wanted for themselves and their families.

Brookhaven isn’t in this sentiment. A similar concern was cited by some who supported the incorporation of Dunwoody in 2008. The lack of decent baseball fields for youngsters was a key motivator. Some wanted to implement the kind of friends-of-the-park program that Atlanta allows, but said at the time they were thwarted by DeKalb County officials. 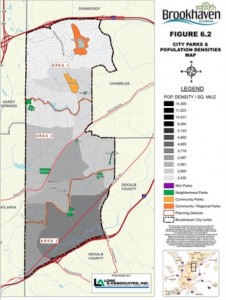 Atlanta faces similar complaints and various national studies have consistently shown it to have among the lowest amount of greenspace per resident.

The desire for parks and greenspace is being addressed by the Atlanta BeltLine, which is intended to be mainly self-funded, as opposed to from city coffers; and PATH 400, a planned linear trail that Buckhead civic leaders intend to establish on publicly owned property. A ribbon-cutting event for the first trail segment is slated for Friday.

In Brookhaven, a new park and recreation center in the Buford Highway corridor is at the top of the residents’ wish list.

The parks plan doesn’t provide much detail on the proposed park. All the plan says is that the park should provide space for sports fields.

In recent years, residents have played soccer and other sports at land at Cross Keys High School. The fields often appear to be at capacity, with a fair number of players waiting on the sidelines for a chance to get into the game. The new community park is intended to address this type of demand for recreational space.

Other areas of interest identified in the master plan include:

“Top five somewhat and much needed:

For more information on the visioning meetings go to brookhavenga.gov.

Photo Pick: Sunday in the cemetery by Kelly Jordan
Britton Edwards October 2, 2017 8:57 am

When the Kids Are Away, Let the Public Play
We’ve Come a Long Way — What’s Next?

Photo Pick: Sunday in the cemetery by Kelly Jordan