Buckhead provides an interesting glimpse into the mixed bag that is metro Atlanta’s commercial real estate industry, a vital piece of the region’s economy. 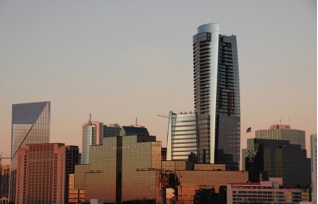 The good news is two major transportation projects should improve access measurably in a region where prestigious buildings are surrounded by traffic congestion. One project involves MARTA’s Buckhead Station, while the other addresses the interchange of Ga. 400 and I-85.

The not-so-good news is the office market continues to drag. Buckhead was one of the region’s five submarkets that lost tenancy in fourth quarter 2012, though Buckhead showed an overall gain in the year, according to the latest vacancy report from Cassidy Turley, a commercial real estate services provider.

The MARTA project is under construction after having been on community development plans going back almost 20 years.

In a nutshell, a pedestrian bridge is being built across Ga. at the north end of the Buckhead Station. The bridge will provide access to the transit station.

This sounds simple enough. But in reality, it will vastly improve the experience of airport travelers who want to ride transit to Buckhead and face a reasonable walk to their destination in a signature business address in the southeast.

Another simple-sounding project is the assemblage of new ramps to connect Ga. 400 and I-85.

The connection seems like a no-brainer, and the fact that it wasn’t built initially has made the state Transportation Department the butt of more than a few jokes.

But in reality, when Ga. 400 was getting the final go-ahead, the politics were such that it could flow traffic only to I-85 south, and accept traffic only from I-85 north.

The new assemblage will complete the plans for a more complete interchange between Ga. 400 and I-85.

Buckhead’s office market got a major boost when Carter’s, Inc., the children’s apparel company, signed a deal for almost 223,000 square feet in Phipps Tower. Terms reportedly include free rent until May 2015, followed by rental rates of $20 a foot and $21 foot, depending on the floor, according to a report in Lambert & Assoc., a CRE services firm.

The Carter deal alone accounted for more than a third of all the office space leased in the Buckhead submarket in all of 2012, according to the Cassidy Turley report. Average asking rent in Buckhead was $26.55 a foot, the highest in the region by a margin of 57 cents a foot over the Midtown sector, the report showed.

The difference between Carter’s negotiated rental price and the average asking price cited by Cassidy Turley is addressed up in this succinct observation from Cassidy Turley’s report:

This recession may be the first to buck the local lore that Buckhead leads the region out of economic malaise.

Just 100,000 square feet of office space is under construction in Buckhead, which is about 11 percent of the total office space being built in the region – 894,476 square feet – according to Cassidy Turley.

The biggest projects are mixed use, and involve properties that were started in the region’s last construction boom – Ponce City Market (the former City Hall East in an old Sears building); and OliverMcMillan’s Buckhead Atlanta (formerly Streets of Buckhead).

Previous Article
A new day for Theatrical Outfit in downtown Atlanta
Next Article
For 15 years, the mark of an Atlanta newcomer: a 678 phone number