Atlanta’s spring cleaning of hazardous materials started with the collection of tons of stuff in March, even as the city looks ahead to a major collection effort on April 27.

The Eco Collection event, in Buckhead, brought in a mind-numbing amount of hazardous waste such as paint, electronics and fluorescent lightbulbs, according to a fact sheet released by sponsors Livable Buckhead and Live Thrive.

The next recycling event on the city’s agenda is the EcoDepot Recycling Day, April 27 at Turner Field. Mayor Kasim Reed’s Office of Sustainability and Councilmember Carla Smith are co-sponsoring the event, which is reported to be the largest of its kind in Atlanta.

The haul from Eco Collection is a stark reminder of the amount of hazardous materials that tend to stack up in storage rooms. Categories of waste dropped off ranged from half-empty paint cans saved for touch-ups, to computers that were replaced but saved “just in case” something happens to the new one. 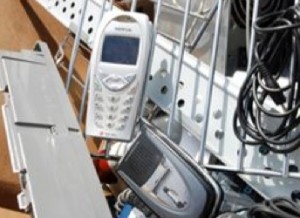 Electronic gadgets can be disposed of at Atlanta’s eco-recycling events, to ensure they don’t end up in a landfill leaking hazardous materials. Credit: City of Atlanta

The event attracted deposits by 360 residents and 25 businesses, according to Livable Buckhead. The items included:

“We are thrilled with the turnout on [March 23], and extremely grateful to all of our volunteers who got soaked to the bone while they worked – especially (Atlanta city councilmembers) Howard Shook and Yolanda Adrean,” Denise Starling, executive director of Livable Buckhead, said in the statement released Wednesday. “This event continues to grow each year, and I think it’s become an established rite of spring for residents to clean out their basements and attics and bring all those broken down electronics and old cans of paint to the Buckhead Eco Collection.”

Proceeds of the recyclying are to benefit the Tommy Nobis Center. The center was formed in 1977 and has helped more than 22,000 individuals with disabilities enter or return to the workforce.

The recycling event at Turner Field has a special focus on electronic gadgets, thought the usual array of hazardous materials are accepted. Items can be turned in from 9 a.m. to 1 p.m. at stations in the Orange Lot at Turner Field.

The flyer on Smith’s webpage notes that: “Today, electronics account for up to five percent of landfill volume and contributes up to 70 percent of the toxins found in landfills because every year newer and better products are being sold to consumers.”

Previous Article
MARTA’s Keith Parker knows system has challenges but sees opportunities
Next Article
Houses are selling like hotcakes, but appraisals are not keeping up to date