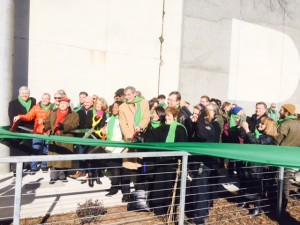 PATH400 will follow the Ga. 400 corridor and link with the planned Atlanta BeltLine and proposed Confluence Trail along Peachtree Creek. Credit: Livable Buckhead

The event began in the offices of Atlanta Tech Village, which provided a safe haven from the 33 degree temperatures that NOAA reported were taken down to 24 degrees by the wind chill. The company provides office and meeting space to budding tech entrepreneurs. Village President David Lightburn serves on the board of Livable Buckhead.