Buckhead Trail to move ahead with design/build agreement with GDOT

Atlanta made a final step Wednesday, perhaps the conclusive one in terms of creating needed bureaucracy, in the journey to build a new park system along Ga. 400 in Buckhead at minimal public expense. 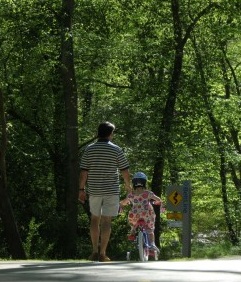 This scene is the type envisioned for the Buckhead Trail. File credit: Livable Buckhead, Inc.

A proposal that formally brings Georgia’s Department of Transportation into the design and construction of the planned Ga. 400 Greenway Trail was approved unanimously by the Utilities Committee of the Atlanta City Council. The council is expected to approve the deal at its Feb. 4 meeting.

Hopes for the trail are high: “This project has the chance to be an example of inventive use of space that people will fly in to see,” Atlanta Councilman Howard Shook said Wednesday evening.

The resolution the committee approved creates the legal framework for GDOT to handle design and construction services for the Greenway Trail, which is also known as the Buckhead Trail.

GDOT is playing an integral role in the creation of this park for a number of reasons, not the least of which is that portions are to be built in unused right-of-way beside and beneath Ga. 400.

GDOT gave the project a big boost last year, when its board approved a resolution that calls for transit and multi-use trails to be included in all managed lane projects.

Gov. Nathan Deal stepped in to assist last summer. The governor provided $750,000 for the trail from the Georgia Transportation Infrastructure Bank. The Legislature created the bank in 2008, and it’s administered by the State Road and Tollway Authority – the entity that manages Ga. 400 – and which is chaired by the governor.

Terms of the deal approved Tuesday by the Utilities Committee call for GDOT to have the oversight role and for the city to pay for the project’s design and construction. The city agrees to maintain the trail once it’s open.

The financial partner of record named in the terms is the Buckhead Community Improvement District. The group actually handling the daily chores is Livable Buckhead, a non-profit organization created to improve the environment in the Buckhead area. 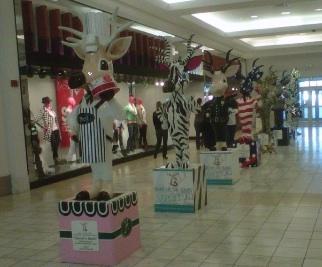 Livable Buckhead is raising money for the project from a variety of sources.

One of them is the Bucks on the Street, which Livable Buckhead announced last week raised $20,000 for greenspace work. To raise money, local businesses sponsored buck, whichwere were decorated during the holiday season. The program concluded with an online auction in December. All the bucks were sold.

The agreement notes that “time is of the essence.” Both the city and GDOT agree to comply with the timeline contained in the region’s Transportation Improvement Program.

If the city can’t hold up its end of the bargain, in terms of providing money or right-of-way, GDOT retains the right until funds can be identified to continue with right-of-way acquisition or construction, according to the terms.

The Buckhead Trail is to be a concrete pathway stretching about five miles with a width of 8 feet to 14 feet. The goal is for it to stretch from a cemetery off Loridans Drive in North Buckhead to the planned Peachtree Creek spur of the BeltLine, near MARTA’s Lindbergh Station.

The path will be open for use by runners, walkers, bicyclists and skaters.

Previous Article
Gov. Nathan Deal: ‘incumbent on us’ to not lose the Falcons to Los Angeles
Next Article
Atlanta Housing Authority board may vote Wednesday on a separation agreement with CEO Renee Glover