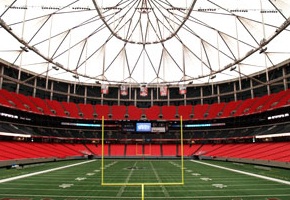 The Atlanta Falcons are seeking a new stadium to replace the Georgia Dome. Credit: georgiadome.com

With debate looming over construction funding for a Falcons stadium, another issue is taking shape – this one over who will get hired for construction jobs.

The Atlanta Falcons are seeking a new stadium to replace the Georgia Dome. Credit: georgiadome.com

The Atlanta City Council is considering legislation to require eligible construction contracts funded by the city to employ a certain proportion of unemployed and under-employed residents of Atlanta. The proposal requires the workers to be either skilled, or in an approved training program.

The legislation does not specify whether its scope would reach to include the hotel/motel tax, which is set by the city council – most recently in 2011. The hotel/motel tax is now planned to help pay for construction of the new stadium that is to have a retractable roof.

The legislation does say it would affect all projects that get money through the city’s industrial revenue bonds, commercial or industrial abatement, and other programs controlled by the city. These programs could be tapped to support ancillary amenities needed to support the new stadium.

The proposal has languished since 2010, when it was introduced during the freshman term of Mayor Kasim Reed. The city’s construction industry was cratering at the time.

The legislation now carries the signatures of 10 of the council’s 15 members (not counting the council president). The only members who did not sign are:

Given that a majority of council members have signed on, the legislation is poised to be approved whenever the council chooses to enact it.

Meanwhile, some new wrinkles in the proposed funding package for the stadium have emerged. The current plan is for the state to increase the borrowing limit of the Georgia World Congress Center Authority from $200 million to $300 million. The increase will provide the last bit of public money needed to cinch a construction deal with the Falcons.

Gov. Nathan Deal threw some cold water on the plan in comments that appeared Saturday in The Atlanta Journal-Constitution. Deal was quoted in the AJC as saying, after learning that an AJC poll showed that 72 percent of respondents object to plans to use the hotel/motel tax levied in Atlanta and Fulton County to help pay for the $1 billion facility:

The city’s pending legislation came to life late last year. It was amended Nov. 27 by the council’s Community Development Committee and put on the calendar for a Jan. 10 public work session.

The work session was cancelled, but the committee could still consider the matter at its meeting Tuesday.

The legislation is a straight forward community benefits deal.

Introductory “whereas” clauses make the case that the city council wants to help residents who are unemployed or underemployed get jobs in the construction industry because such jobs are a path to the middle class.

Penalties for non-compliance range from withholding 10 percent of all future payments, to cancellation of the contract.