Building community bit by bit along the Atlanta Beltline

Community. I’ve always had it. I was born in 1971 in a Miami neighborhood where my aunts, uncles, cousins and grandparents all lived just three blocks apart, and my elementary school was just down the street. My parents are Puerto Rican who grew up in New York City.

My mom worked as an executive secretary, and my dad worked as a printer for Eastern Airlines, so we were able to travel the world until about the time I turned 15.

After I graduated from high school, I tried going to college for architecture and toyed with the idea of becoming a city planner. But then I left school to go work fulltime. For most of my working life, I’ve worked for transportation companies. I spent 12 years with U.S. Airways (with free flight benefits) and then I became a freight train conductor for CSX Railroad for the past four-and-a-half years.

Family, community and multi-generational gatherings have been part of my life for as long as I can remember. And it is that spirit of community that I long to instill in Atlanta.

When I arrived here in Atlanta 12 years ago, I wasn’t doing much other than working and rollerblading in Piedmont Park. My family was here: mom, my sister, Amy, and my grandma, who at the time was 90 years old.

I moved into a historic building on Piedmont Park, the Piedmont Crest, back in 2003. It was amazing — a top floor apartment overlooking Piedmont Park for only $650 a month. I couldn’t believe it. 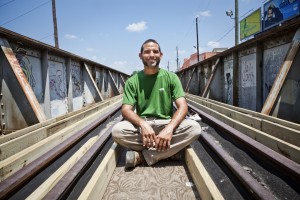 But a year after moving in, I found out that they were going to demolish the building and put up modern condos. I started going to meetings, calling meetings and getting involved. The building was razed in December of 2004, but my passion for Atlanta was just beginning.

By this time I had been in contact with every person who was representing me at the Midtown Neighbors Association, City Hall, the Georgia House of Representatives, the Georgia Senate and all the way up to the U.S. House and U.S. Senate.

It was a tough time — I had lost the battle of the Crest; I was about to get laid off from my job of 12 years; and I had just found out that Grandma couldn’t get back on Section 8 housing because of the length of the waiting list. I was pissed, but I was also energized. I was getting involved.

My interest in trees, historic preservation, HIV vaccines, homeless issues, bikes and transit all steered me to a new project — the BeltLine. I became aware of its potential after I attended an Urban Land Institute program on the Beltline at Atlantic Station in 2004.

As it turned out, the BeltLine incorporated all the individual themes in my volunteering life — but not just in my own Midtown neighborhood but in communities throughout the city.

When I got the job at CSX in 2005 — working an average of two-and-a-half days a week while being on call 24/7 — I had even more time to volunteer. I became increasingly aware of the importance of community and spirituality.

My grandma died in the fall of 2007 at the age of 100. She had lived on her own and taken care of herself until the age of 98, and then she moved in with my mom who took care of her for the last two years of her life.

I would call grandma daily and visit her at least weekly out in Marietta/Smyna for those last 10 years of her life. She had helped raise me for the first 10 years of my life, so it seemed only fitting that I would be a major part of the last 10 years of hers.
I didn’t realize it, but she left me a tremendous gift when she died — time. The time that I had spent with her became free time that was now my own time. At the same time my flight benefits had ended, and both events helped set the stage for a new chapter of my life.

For the last year-and-a-half, I have become a full time resident of the City of Atlanta. No more travel on my days off, no more leaving the country at a moment’s notice to visit China, the Netherlands or Israel. No more day trips to New York City or San Francisco. Atlanta has become my full-time home, the likes of which I have never had — ever.

If you feel as though you have seen me around and about, it’s because I try to be everywhere. I am not a resident of Midtown anymore; I’m a resident of Atlanta.

It’s all a matter of how on chooses to spend one’s time. My television died 10 years ago and I never replaced it. I didn’t get a cell phone or a computer till four-and-a-half years ago. I only recently got the nerver to get on Facebook and Twitter.

I’ve been lucky to have had the time, energy and passion to contribute to Atlanta and the Beltline — receiving as much as I’ve given. It’s all about community and balance, and I’m just trying to do my part. Join me.