Bullets flew over traffic jam in 1997, but scant notice paid as relief arrives 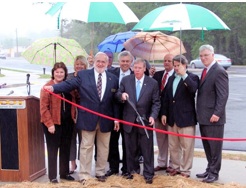 Sixteen years ago, the traffic on Johnson Ferry Road between Cobb and Fulton counties was so bad that someone fired two slugs into the control box of a traffic signal, evidently to make a green light last longer.

It’s anyone’s guess as to why the improved road has garnered such little comment. But it does suggest some degree of weariness when a $26 million project that was nearly 30 years in the making doesn’t trigger a buzz.

Johnson Ferry Road gets a lot of traffic because it links the densely populated areas of east Cobb and southern Cherokee counties with I-285 and Ga. 400. In addition, the road leads to the retail and business centers at and near Perimeter Mall.

The Georgia Department of Transportation identified Johnson Ferry Road as a bottleneck in 1987. Cobb widened the road on its side of the river. Fulton, citing funding shortfalls, delayed work.

Frustration grew along with traffic congestion. At the time the traffic light box was shot, in July 1997, the timing of the light had reached the point that the trip through the valley that’s bisected by the river could take an hour, according to a story by the Associated Press.

GDOT fully engaged in March 2002, according to its timeline of the project. The process of acquiring rights-of-way started in August 2005. The project was let in January 2009 and was completed in recent weeks – after a few delays.

According to GDOT’s statement on the project:

“This event will be a celebration of better traffic flow in an area that has witnessed an incredible increase in traffic congestion during the past two decades. I am so pleased in the partnerships that have made this project such a success. With Sen. Isakson’s support and with the planning and coordination with FHWA [Federal Highway Administration] and the City of Sandy Springs, I believe we have a roadway that will serve this area very well for years to come.”