Bullhooks could be used on circus elephants, and petting zoos would be banned in Atlanta parks, under two proposals the Atlanta City Council is slated to vote on today.

The bullhook issue is part of a broader bill that a senior advisor to Mayor Kasim Reed said is needed so that Atlanta can take back its animal control ordinances from Fulton County. Fulton bans bullhooks. The petting zoo ban is part of a broader effort by the city parks department to control undesired activities.

Both measures are expected to sail through the council, given that they appear on an agenda crowded with matters including the planned adoption of the city’s 2013 budget, which takes effect July 1. 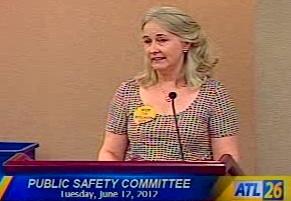 To Atlanta resident Dorothy Hancock, Atlanta should ban the use of bullhooks just as has Fulton County. To her, it’s a matter of doing the right thing.

“It’s a message for the whole of America, really, if one continues to allow the use of bullhooks in the training of elephants,” Hancock told the city council’s Public Safety Committee last week.

Councilmember Joyce Sheperd led the questions about the treatment of circus elephants. Her questions prompted Thomas Albert, a vice president with Feld Entertainment, which runs the Ringling Bros. and Barnum and Bailey circus, to report the company’s 2011 settlement agreement with the U.S. Department of Agriculture.

The company paid $270,000 to settle with the agriculture department. Albert said the company does not agree that it did anything wrong, but determined the agreement was the best way to manage the issue, which resulted from a five-year evaluation of the company.

To Mayor Kasim Reed’s administration, Atlanta is responding to a deadline created by Fulton County. The county sent the city a letter within the past month, telling the city to come up with its own animal ordinance by the end of June, said David Bennett, a senior policy advisor to the mayor.

Bennett did not mention bullhooks in his presentation.

“They are enforcing without an agreement, and that provides some sort of legal challenges,” Bennett told the Public Safety Committee, referring to Fulton County.

“In the future, we are in control of animal regulations in the city,” Bennett said. “If any new ordinances are needed or any need to be deleted, action will be taken by the Atlanta City Council and not by Fulton County’s board of commissioners.”

Currently, Atlanta has an agreement with Fulton County for animal control services. The county’s regulations are enforced in the city.

The path to controversy began in June 2011, when Fulton’s board of commissioners approved a bullhook ban. The issue came to a head in February, when the county notified Ringling Bros. and Barnum & Bailey circus that the bullhook ordinance would be enforced. The circus responded with a lawsuit, which resulted in a ruling that the bullhook ban could not be enforced within Atlanta.

Feld Entertainment, which runs the Ringling Bros. circus and several other big name acts, sent three or four representatives to the Public Safety Committee. All contended that bullhooks are necessary tools for controlling the behavior of elephants.

Delcianna Winders, a lawyer serving as director of PETA’s Department of Captive Animal Law Enforcement, which oversees issues pertaining to animals used in entertainment, led the presentation against the use of bullhooks.

The committee’s vote was 5-2 in favor of the proposed ordinance. The two negative votes were cast by Sheperd and Councilmember C.T. Martin. That proposal will be part of the committee’s report to the full council, whereupon the council will cast its vote.

The ban on petting zoos on city parkland is part of a bill that also would ban the blasting of model rockets and the use of metal detectors to search for anything beneath the surface of the ground.

The petting zoo ban will be on the consent agenda, meaning there will be no debate unless a member asks for further conversation.