A behind-the-scenes Atlanta business leader who led key organizations at a sensitive time in the city’s history — John C. Wilson — passed away on Saturday night at Piedmont Hospital.

Wilson, a fifth generation Atlantan, served as the president (a position now called chairman) of the Atlanta Chamber of Commerce in 1970 — helping foster the idea of Atlanta as the next great international city. He was chairman of the International Air Routes Task Force in 1971 — which helped open Atlanta’s airport to inaugural international service a couple of years later.

Wilson also served as chair of the Federal Reserve Bank of Atlanta as well as several other corporate and civic boards.

According to the obituary prepared by the family, Wilson attended E. Rivers School and North Fulton High School, where he was an Eagle Scout. He attended Emory University, where he was a member of the Chi Phi Fraternity and elected to the Phi Beta Kappa Society. 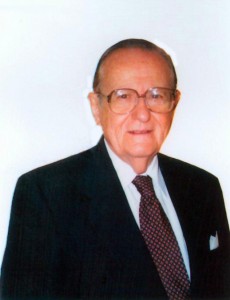 Following his graduation from Harvard, he served as a First Lieutenant in the U.S. Army Quartermaster Corps, primarily as the executive officer of the Contracts Division, Boston Quartermaster Depot.  He received an Honorable Discharge in 1946, and returned to Atlanta to complete his undergraduate education at Emory.

In 1946, Wilson went to work for Horne-Wilson, Inc., a wholesale distributor of plumbing, heating and air-conditioning products to the construction industry, becoming president and CEO in 1962.

Under his leadership, Horne-Wilson was selected in 1965 by Supply House Times as Wholesaler of the Year in the United States.  Horne-Wilson was sold to I.U. Corp. in 1974.  Wilson then became president and CEO of Multimart Corp., established for international trade, research and consultation and overseas distribution for U.S. products and manufacturers, from 1975 through 2007.  Multimart was sold to OmniMart Corp. in 2007.

He served on the District Export Council for the U.S. Department of Commerce for 10 years starting in 1977 and on the board of trustees of the Beck Foundation. He was a founding member of the International Council of Georgia, Inc. and a founding director of the World Trade Club Atlanta.

Wilson received the Consular Corps of Atlanta Award in 1970 for his outstanding contribution to international understanding and the World Trade Council Award as Citizen of the Year in International Trade in 1971. And in 1983, he received the Governor’s International Award for International Service for his service to global business in Georgia.

In addition to serving as chair of the Atlanta Fed fro 1972 to 1973, Wilson served as a member of the Bretton Woods Committee, a nonpartisan network of global citizens which works to demonstrate the value of international economic cooperation and to foster strong, effective Bretton Woods institutions.  He also was president of Community Chest and later of United Appeal, the predecessors to United Way.

In 1965, Wilson joined the board of Bank South Corp., and remained on its board until 1991 except for whenn he was serving on the Atlanta Fed’s board. He even stepped in as Bank South’s interim CEO during a controversial leadership transition from June to August 1991.

Wilson also was quite active in the education arena — serving as a trustee of Agnes Scott College from 1972 to 1982, as a member of Emory University’s Board of Visitors, on the Shorter College School of Business Board of Advisors, and as a trustee and emeritus trustee for the Westminster Schools.

Wilson also  was a man of faith.  He was reared in the Methodist Church, but he and his family joined First Presbyterian Church of Atlanta in the 1950s.  For many years, he attended the Berean Bible Class at First Presbyterian and was a former Deacon of the church.

During his life, Wilson loved and was utterly devoted to his wife, the former Margaret Eugenia (Jean) Creekmore of Athens, Georgia, their children and grandchildren.

The family expresses profound appreciation to his care-givers, Charles Catalina, Felix Manford, George Washington, and Junior Charlot.  In lieu of flowers, memorial contributions can be made to a charity of your choice.

Private services will be held at Arlington Memorial Park on Wednesday, March 12, and a memorial service at H.M. Patterson & Son, Spring Hill Chapel, on Thursday, March 13 at 11:00 A.M., with reception following.