C.T. Vivian gets celebratory send-off at City Hall for receiving Presidential Medal of Freedom on Nov. 20

In the atrium of Atlanta’s City Hall on Saturday afternoon, a couple of hundred Atlantans came to give Vivian a “Congratulatory Send-off in Celebration of the Presidential Medal of Freedom” that he will receive at a ceremony in Washington, D.C. on Nov. 20. 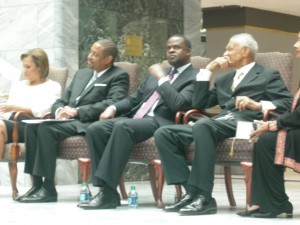 After numerous friends and dignitaries spoke of the role that Vivian played in the civil rights movement for more than six decades, the lanky leader of justice clapped his hands with a great smile on his face — repeatedly saying: “Thank you. Thank you. Thank you.”

Then Vivian said that instead of him accepting the Medal of Freedom in Washington, President Barack Obama should come to Atlanta to witness the place and the people where history was made.

Many of the remembrances of the day were of when Vivian worked side-by-side with Martin Luther King Jr. during the movement.

“We were not ready for Martin, but Martin was ready for us,” Vivian said. “As good preachers, we do something. We don’t talk something. Martin taught us that it’s in the action that we find out who we really are.” 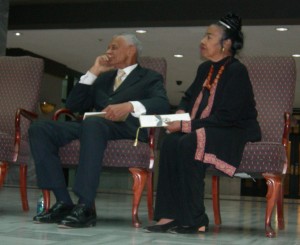 At 89, Vivian seemed to feel the weight of history on his shoulders.

“Martin gave us a strategy that allowed us to change this nation,” Vivian said. “We changed America. America didn’t change itself. It may have been out of desperation, but we changed it.”

When he goes to Washington, D.C. to accept the Presidential Medal of Freedom from Obama, Vivian said “one of the great things” will be that it will be coming from one “black hand to another black hand. It tells us how far we have come.”

That was a theme repeated several time during the celebration on Saturday.

Atlanta Mayor Kasim Reed said that all his life, Vivian has been answering the civil rights call (credited to fellow soldier Congressman John Lewis): “If not us, then who. If not now, then when?” By the way, Lewis received the Presidential Medal of Freedom in 2010. 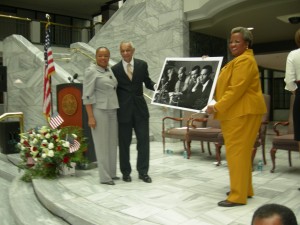 Dr. Bernard Lafayette spoke at Vivian’s Tennessee roots and the importance of Nashville movement in the early days of the civil rights movement through the teachings of James Lawson and his students.

Xernona Clayton, one of the “legacy ladies” of the civil rights movement spoke about how Vivian was always on the move that it was hard to keep up.

Clayton teased Vivian about his life partner — his late wife — Octavia — who passed away in May, 2011. “He always called her: ‘the wife,’” said Clayton, adding that she wondered if she had a name. 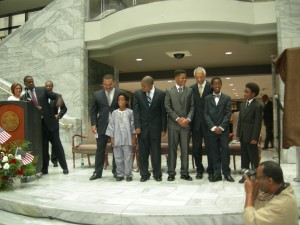 Members of the C.T. Vivian Leadership Institute thank their leader

Ingrid Saunders Jones said she remembered the day when C.T. Vivian first came into her life. It was March 24, 1970 when she was watching the documentary: “From Montgomery to Memphis” — which used original footage to document the movement from 1955 to King’s assassination in 1968. Little did she know that she would soon be moving to Atlanta to work with the late Mayor Maynard Jackson and the heroes of the movement.

C.T. Vivian is my neighbor. He is my friend. I met ‘the wife.’ They were a team,” Jones said, adding that their home was filled with floor-to-ceiling shelves of books — a real sanctuary of knowledge.

Elisabeth Omilami, who runs Hosea Feed the Hungry, said her father — Hosea Williams, Vivian, King and the other leaders in the movement “were men of God.”

“My father would say: ‘I would rather see a sermon any day than hear one,’” Omilami said. “Here you are seeing a sermon.” 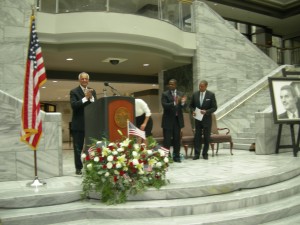 C.T. Vivian claps with joy at all the festivities in his honor

One of the most touching moments of the day was when several young boys and men — all members of the C.T. Vivian Leadership Institute — spoke of what the civil rights leader had meant to them.

All of them spoke of the love and respect they had for him, and each finished their comments by declaring: “I am C.T. Vivian.” A visibly moved Vivian gave each of the young men a hug — showing he was paying it forward.

Vivian closed his comments to the audience by looking toward the future.

“We changed this nation,” Vivian said. “We changed political life in this country. The most important thing is that we are going to keep on changing it, and we better now than we used to be.”

Previous Article
Willis to Franklin, Woolard, Dickens: Mind your ethics before attacking mine; Franklin fires back
Next Article
Atlanta will prosper if more companies step up to support BeltLine project