Camille Russell Love, executive director of the City of Atlanta's Office of Cultural Affairs, at the 2021 Atlanta Jazz Festival (Photo by Maria Saporta)

The 44th edition of the Atlanta Jazz Festival took place Labor Day weekend at Piedmont Park – after several cancellations and postponements because of the COVID-19 pandemic.

Originally it had been scheduled for May 2020 and then July 2020 – as festival organizers tried to plan the free outdoor events within City of Atlanta’s guidelines for gathering during the pandemic. 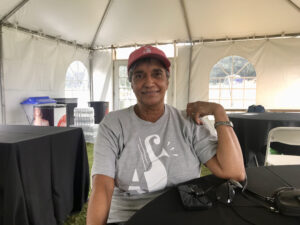 Camille Russel Love, executive director of the City of Atlanta’s Office of Cultural Affairs, in the media tent at the 2021 Atlanta Jazz Festival (Photo by Maria Saporta)

“We booked all these acts to May 2020,” said Camille Russell Love, executive director of the Atlanta Mayor’s Office of Cultural Affairs, during an interview at the Jazz Festival Sept. 5. “The challenge was to keep the artists booked.”

All but one act originally scheduled for Memorial Day weekend 2020 performed during this Labor Day weekend festival.

“The festival Gods were with us to have rescheduled it so many times,” Love said.

The Atlanta Jazz Festival had to weigh the pros and cons of holding the outdoor music festival before deciding to go ahead with the 2021 event.

It’s an exercise every major event is having to experience during a surge of COVID cases and other natural events. 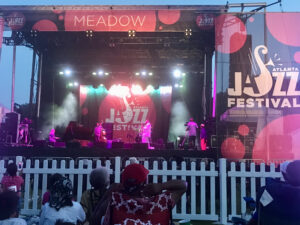 For example, the Tennessee Bonaroo Music Festival was canceled on the eve of its planned dates of Sept. 2 to 5 due to flooding from Hurricane Ida.

The Decatur Book Festival, normally held during Labor Day weekend, is moving permanently to October, and it will be a one-day affair this year.

This year, the Atlanta Dogwood Festival – another free event in Piedmont Park – took place in August rather than its normal Springtime in April when the dogwood trees are blossoming.

Music Midtown, a gated event, is requiring everyone to bring a copy of their vaccine card or a negative COVID test result within 72 hours of the Sept. 18 and 19th festival at Piedmont Park. 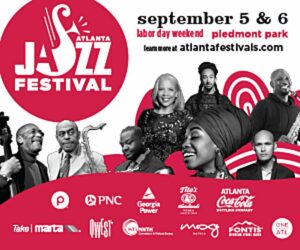 Requiring vaccinations or negative COVID tests were not an option for the Atlanta Jazz Festival because it is a free event open to all. But masks were required in the limited indoor venues.

“Everybody has had to make modifications,” said Love, adding that the 2021 festival was being livestreamed for the first time. “We were approached by Quincy Jones’ network – Qwest TV, which is launching a jazz and beyond network. They agreed they wouldn’t charge our patrons. So, people who don’t want to come downtown, they can watch the livestream. It also allows our festival to be viewed globally.”

Putting on a free music festival has had its challenges.

“The Atlanta Jazz Festival is the longest running free jazz festival in the country,” Love said. “We wanted to continue the tradition that (Mayor) Maynard Jackson started 44 years ago.” 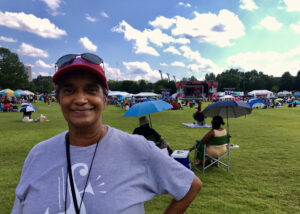 Camille Russell Love, executive director of the City of Atlanta’s Office of Cultural Affairs, at the 2021 Atlanta Jazz Festival (Photo by Maria Saporta)

“We lost access to the hotel-motel tax, which funded our festivals. We previously got $1 million that went to the two festivals,” Love said. “In 2008, we had to choose one or the other. We chose the festival with our name.”

“Without that appropriation, we couldn’t make it,” Love said. “We are trying to keep a free festival in Atlanta.”

Publix is the festival’s biggest contributor followed by PNC Bank. It also receives support from the Atlanta Falcons and Atlanta United. It has had a longstanding relationship with the Coca-Cola Co., and it has a new relationship with Georgia Power. 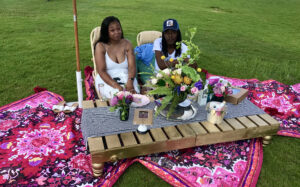 “I would like to ask the local firms headquartered here to contribute to this festival as a gift to their employees,” Love said. “Our next festival will be Memorial Day weekend 2022. We really need the corporate community to step up.”

Love, who has been head of Atlanta’s Office of Cultural Affairs for 23 years, was pleased with the turnout of people who showed up for the 2021 festival.

“We knew there would be a pent-up demand to be outside and to commune together and listen to music,” Love said. “People are being respectful.”

Still, Love drove a golf cart around the festival making sure people were complying with the rules of no dogs and no bicycle riding where the festival was being held. She was especially proud of the kidzone where there were jazz percussion workshops with prizes for attendees. 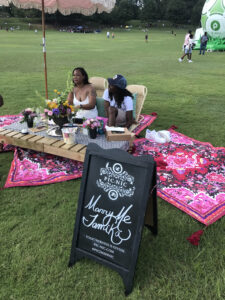 The sign board at the Atlanta Jazz Festival said: “Marry Me Tamika” She said yes (Photo by Maria Saporta)

They did move the dates of the festival from Saturday-Sunday to Sunday-Monday to accommodate other park events that had already been scheduled for Saturday.

“COVID has made all of us more cooperative with one another,” Love said. “People want to be able to commune with other people and enjoy the elements. We are really honored we could provide this experience. It does feel good. We are dedicated to making sure that the arts and culture are available to everyone.”

Still, Love said “the need is absolutely there” for a dedicated funding stream for the arts so the city can continue offering cultural experiences for adults and children alike.

At 71, Love shows no signs of slowing down – having worked for four different mayors.

“I’ve been asked by every mayor to stay,” Love said. “I will work until I don’t feel like working. Right now, I’m good.”