Election season is rising at Atlanta City Hall, even though candidates won’t be able to qualify for seats until Aug. 26. 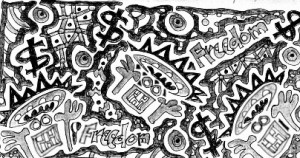 This mural, titled Gobind, was the vehicle for a conversation between a resident and members of the Atlanta City Council over the council’s consistency in following its procedures for review of proposed public art. Credit: Dan Hagerty

On Wednesday, the public tussle was over a proposed mural in Little Five Points. The painting is the kind of thing that used to appear on a building overnight, with no prior discussion other than among the anonymous artists.

Atlanta resident Ron Shakir demanded to know if the proposed mural had received all the required approvals before the Zoning Committee signed off on it. Then he raised a number of questions that foreshadow the issues of open government and consistent process that are slated to be highlighted at a “gathering” planned for Friday at City Hall by mayoral candidates Al Bartell and Paul Luna.

The issue of open government, public comment and other matters of how Atlanta conducts business has become a bone of contention between some residents and elected officials. The issue plays out in different ways, depending on who’s talking and the context of the discussion.

On Wednesday, at Zoning Committee, Shakir started his discussion with a battery of questions about whether the proposed mural had been reviewed by whoever is supposed to review such proposals.

“I have known community leaders at the AU Center who had to show the artwork, there had to be sketches of it,” Shakir said.

“This mural went through the process,” Sheperd said. “It was vetted in committee. It was vetted through the councilperson. This is an example of what should happen with murals. Legislation was present, which is not the case with other murals.” 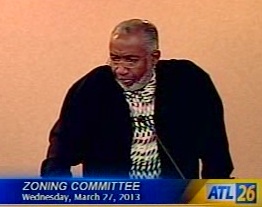 Shakir later returned to the podium and engaged committee Chair Keisha Lance Bottoms in a conversation about his desire to make a public comment. Bottoms evidently had not received a list of residents who had signed up to speak, presumed there were no speakers, and prepared to adjourn the meeting without calling for public comment.

“Why are you rushing this situation like this,” Shakir said. “I signed up. The paper’s there in your possession, isn’t it.”

Bottoms said, no. And the two bantered for a few moments.

“You’re twisting this thing all up,” Shakir said. “Here you’re about to adjourn a meeting when I’m clearly signed up. I had expenses coming down here.”

Shakir raised a variety of issues and the meeting adjourned.

Meanwhile, Bartell and Luna plan to have a “gathering” Friday at City Hall. Details were not included in materials they released. But here’s the apparent mission statement in one release:

Incidentally, the Zoning Committee approved the proposed mural, to be painted in latex on the brick side of a building at 381 Moreland Avenue.

The title is Gobind, and the artist is Dan Hagerty, of King Pig. The mural was approved by the city’s Office of Transportation, Urban Design Commission, and Office of Cultural Affairs.

Final approval is expected at the April 15 council meeting, the next meeting after the council’s spring recess.