One big question that arose last autumn was who would be the face of the campaign for the 1 percent sales tax for transportation that will be on the July 31 ballot in the 10-county metro Atlanta region.

Two TV ads have been released and neither shows a living creature. Both are comprised solely of computer-generated graphics.

There’s no snippet of Atlanta Mayor Kasim Reed on the stump, as he was for the recent successful campaign to extend a sales tax for the city’s sewer upgrades. No comments from Norcross Mayor Bucky Johnson, whose skill in presiding over the Atlanta Regional Roundtable resulted in its unanimous vote to create the $6.14 billion list of projects to be paid for with the sales tax.

There’s not even an avatar of anyone involved with the campaign. 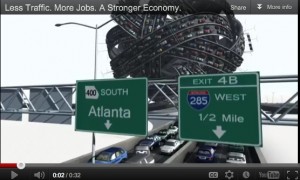 The visual of the latest ad begins on southbound Ga. 400, approaching I-285. Atlanta’s jam-packed highways are shown as black ribbons tied up in a knot. There’s a touch of surrealism, a la Salvador Dali, as the knot is released by the proposed road and streetcar projects to be funded by the transportation sales tax.

The audio message is warm and inviting, largely because of the familiar tone of the narrator, Scott Pollak. Pollak is a professional voice talent whose credits include WABE-FM, 104.7-FM (The Fish), audio books and an array of corporate work around the country.

The ads evidently fit into the campaign strategy that Che Watkins outlined recently in a presentation to the board that oversees the Atlanta Regional Commission. Watkins, who manages the campaign, did not talk about the two TV ads.

Click here to see the persuasion ad released by CTM.

Click here to see the educational ad released by MAVEN.

Based on Watkins’ description, the campaign strategy has three phases:

Following the poll, Watkins said the campaign will consider voters and:

“We’ll divide them by ‘hard no,’ ‘hard yes,’ and ‘swing.’ We’ll ignore the ‘hard no’s’ and have them go to Hawaii, maybe, on the 31st [election day]. We’ll target swing voters and educate them more about what we’re doing and what this about.” 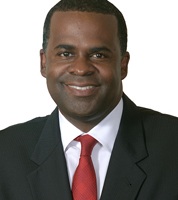 Atlanta Mayor Kasim Reed does not appear in TV ads promoting the sales tax for transportation.

Both groups were associated at their start with the Metro Atlanta Chamber of Commerce. Watkins served as the chamber’s vice president of external affairs before stepping down to lead the sales tax campaign after the former manager, Glenn Totten, resigned in August 2011.

“We’re trying to raise a bit more money to do a bit more TV,” Watkins said. “Over $5 million has been raised. We’re $1.8 million away from our goal.”

No campaign disclosures have been filed, and none are required by the state to be filed until 15 days before the election. CTM expects to file a disclosure in May, a spokesman said.

Meanwhile, Watkins said, the campaign staff is working on earned media, which typically is defined as a news story created by a journalist.

Norcross Mayor Bucky Johnson, who presided over the Atlanta Regional Roundtable that unanimously approved the project list, does not appear in TV ads for the sales tax.

“Before, there were some negative articles, and now our team is being able to turn the tide,” Watkins said. “We won’t be able to turn everyone, but we have some points and counterpoints.”

As the campaign nears its end, Watkins said the focus will shift from persuading voters to support the sales tax to getting them to cast their ballots.

“It will be about absentee ballots and turnout,” Watkins said.

Previous Article
Citizens should take advantage of planning rules of public engagement
Next Article
Away from Facebook’s social circle, a connection to sacred circles