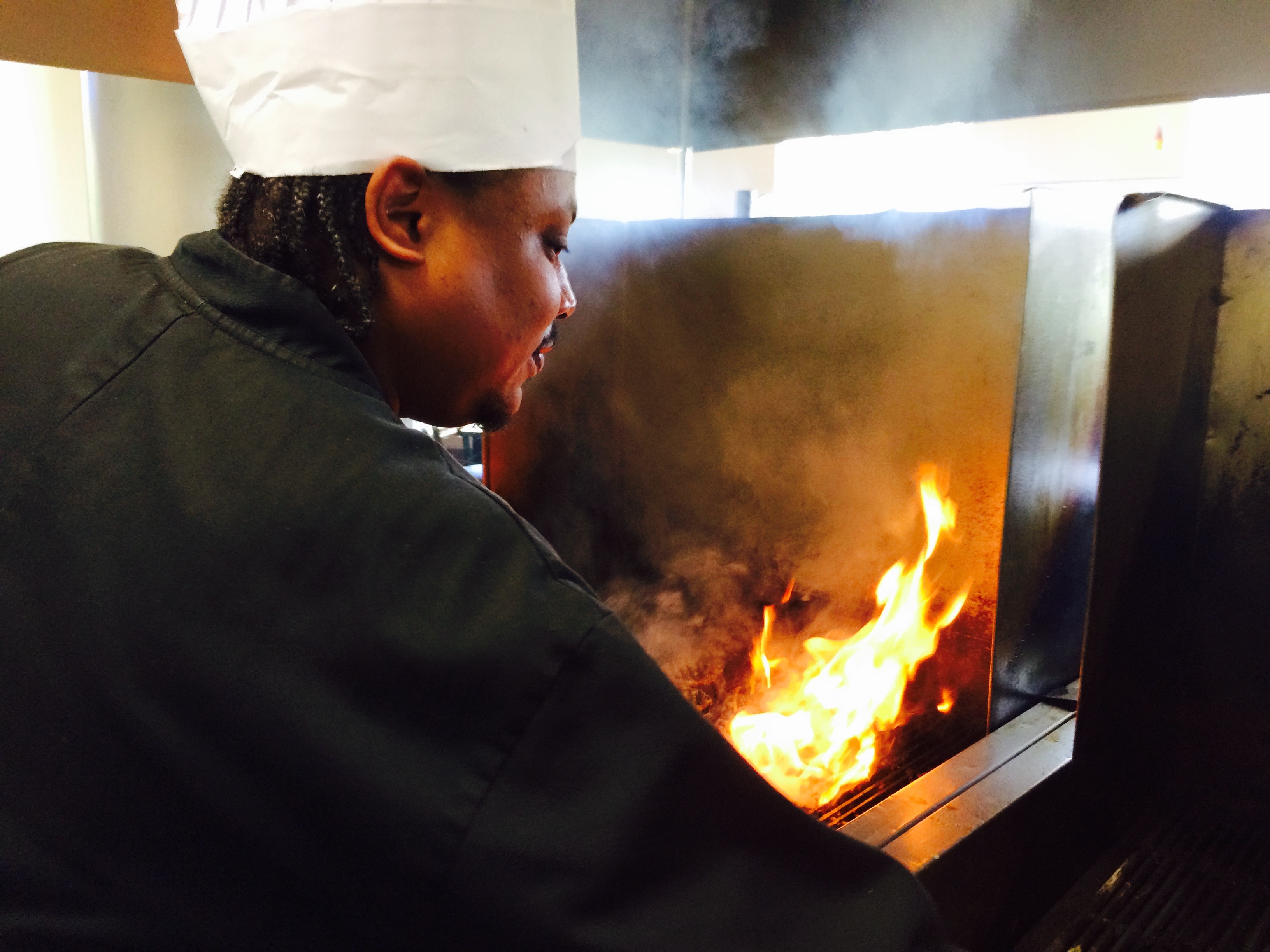 Python and yak are on the student menu at Kennesaw State University. So are tomatoes from plants that grow 30 feet long in a KSU greenhouse. As well as lettuce grown hydroponically in the dining hall. 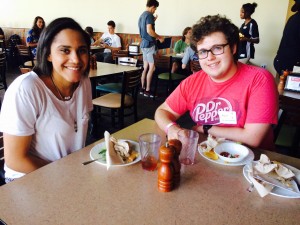 Incoming freshmen Rachel Johnson and Matt Coutu said they enjoyed their lunches during orientation. Rachel had a salad and calzone. Matt had guacamole, calzone and a dumpling he thought was stuffed with pork. Credit: David Pendered

Kids still can choose a hamburger, and most do at the start of their college years. But they become more adventurous after seeing intriguing entrees on other students’ plates, said Gary Coltek, executive director of KSU’s culinary and hospitality services.

“Guacamole, a dumpling, and a calzone,” he said of food that used to be on his plate. “The dumpling had some sort of meat. I’m guessing pork.”

Pork is was, from a pig cooked in a rotisserie right behind the serving line. 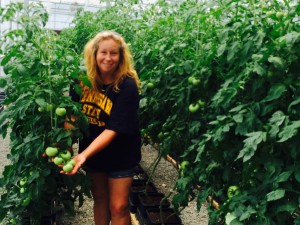 Hickory Grove Farm Manager Robin Taylor stands in a forest of 920 tomato plants, each of which is to reach 30 feet in length and produce up to 100 pounds of fruit. Credit: David Pendered

KSU has hit the national food radar with its sustainable dining program and two-year-old sustainable culinary degree program. As of April, the school is named for Michael Leven, chairman/CEO of Georgia Aquarium and former president of three hotel chains, who donated $5 million to KSU to promote leadership training for the hospitality industry.

The whole notion of “sustainable food initiatives” takes on a different meaning when it’s served up on plates and in glasses at KSU’s dining hall.

For starters, KSU has created a closed-loop food system. They call it farm to campus to farm. Food is grown on a KSU farm. It’s transported three miles to campus and converted to meals. The organic waste is hauled back to the farm, where it’s turned into compost used on the farm.

Robin Taylor has managed the Hickory Grove Farm for five years. She oversees 920 hydroponic tomato plants, each of which produces from 75 to 100 pounds of tomatoes. Cucumber plants produce fruit that’s ready to eat in two weeks. There’s corn, watermelon and berries, lots of berries – blueberry, raspberry, blackberry – and asparagus. A shiitake mushroom garden grows in a shady forest. 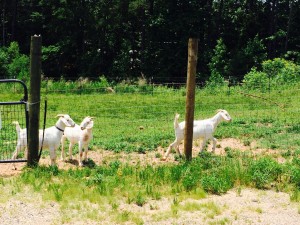 These three goats whose names were inspired by a Waffle House favorite, Scattered, Smothered, and Covered, are more decorative than productive. All are male, but a female may be added to produce goat milk. Credit: David Pendered

Three goats romp in a corral. They’re more scenic than productive, given that they’re all males. They do give two farm dogs something to do, which is chase away coyotes who have jumped fences to get to the goats, Taylor said.

The 16-acre farm hasn’t been easy to create. Soil was depleted by years of service as a concrete yard used by the Georgia Department of Transportation. After state Rep. Ed Setzler (R-Acworth) helped arrange for KSU to have access for use as an educational farm, about 3,000 dump truck loads of material were hauled in to lower the pH from 9.0 toward the desired level of 6.2, Taylor said.

Back at the dining hall, The Commons, students and guests eat in a facility said to be the largest LEED-Gold certified college dining hall in the country. Coltek said he ensured it was designed in such a way that cooks are able to prepare and serve small batches of food, some of which is cooked to order. A staff of about 150 serves more than 30,000 guests a week – averaging from 5,000 to 8,000 a day, Monday through Thursday.

Broccoli is an easy item to illustrate the difference between this kitchen and most commercial kitchens. Commercial kitchens typically cook large pots of broccoli and ladle it out as orders arrive. That’s why broccoli can seem, bland. In The Commons, broccoli is cooked to order and served immediately. 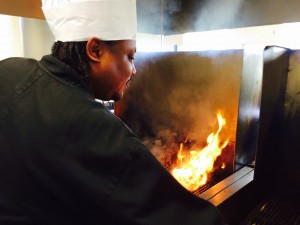 “We cook and serve our food right away,” said Melissa McMahon, assistant director of marketing and a part-time professor. “It limits waste. And we want it to be fresh – 70 percent of our food is made from scratch.”

McMahon points out the containers where hydroponic lettuce is grown. The units produce 700 heads of lettuce, every three weeks.

“We don’t have to go to Whole Foods to get lettuce grown in a natural method,” McMahon said. “You get healthier food this way, and it would cost a fortune if we had to go out and buy it.”

The Commons spans 54,000 square feet and is a collection of nine serving lines, each offering distinct meals with items that change daily. There’s a deli-inspired Highway 41, which offers burgers and fries. Apron Strings serves smoked beef brisket and potatoes. Campus Green specializes in salads. And Stone Mill Bakery provides a host of cookies and sweets.

Gluten free, vegetarian, and vegan items are available. A grist mill in the kitchen grinds grits and corn meal. Sauces and soups are homemade, without the use of bases or MSG. Wheat grass shots are produced by an extractor.

The nutritional and wellness components of the various servings are shaped by the campus dietician and executive chef. 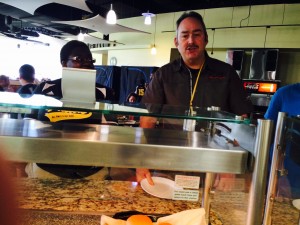 Conyers police Capt. Jackie Dunn places a special order for a hamburger with an egg on top. Dunn later eats it paleo-style, without a bun and with a fork. Credit: David Pendered

Incidentally, The Commons is open to the public. Coltek said the dining hall attracts a steady clientele from nearby businesses. Prices for all-you-can-eat meals, including tax, are $8 for breakfast; $10.50 for lunch; and $14.75 for dinner. Summer hours are in effect, and the hour and menus and posted on The Commons’ website.

Policemen have a reputation for knowing good places to eat. A group of cops who are at KSU for a training program said The Commons is a good place to eat.

Conyers police Capt. Jackie Dunn had a burger cooked to order, topped with an egg sunny-side up. Once Dunn slid the meat and egg out from the bread, and ate it with a fork, he had a picture-perfect paleo meal. 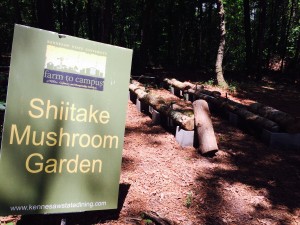 Shiitake mushrooms grow in holes drilled in a felled tree trunk. The holes are plugged with bees wax to protect the germinating mushroom. Credit: David Pendered 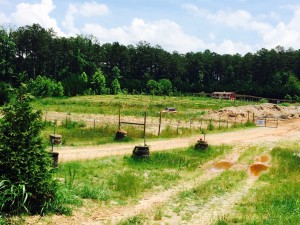 Berries are planted in the terraced hillside that rises toward a barn at Hickory Grove Farm. Credit: David Pendered 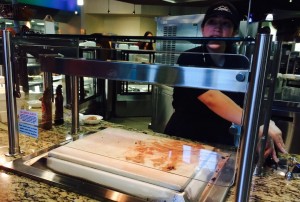 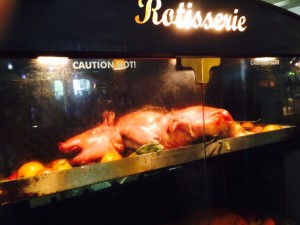 Whole pigs are cooked in a rotisserie and transformed into entrees including pork-stuffed dumplings. Credit: David Pendered

Previous Article
Newnan’s Carnegie Library — the reclamation and return of a lost legacy; and a Southern Litfest featuring “bourbon on the porch”
Next Article
Atlanta region planning a network of bicycle and walking trails, paths and lanes