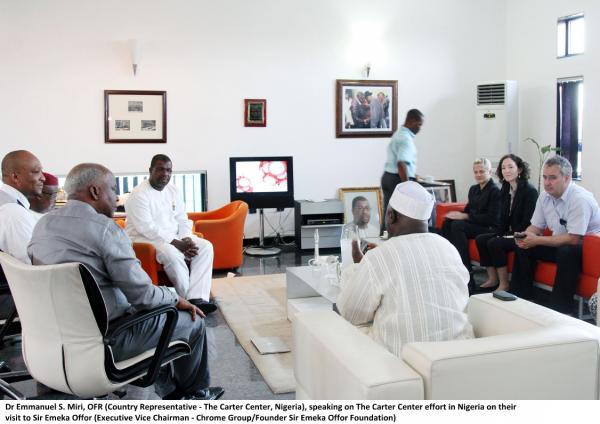 The strategic international effort to eliminate river blindness (onchocerciasis) received a major boost today when philanthropist Sir Emeka Offor announced a $10 million gift to accelerate the fight against the devastating disease in Nigeria.

Offor made the announcement Friday morning in Atlanta at the Carter Center with former U.S. President Jimmy Carter. The grant will go towards eliminating river blindness in seven states in Nigeria where the Carter Center works with the Federal Ministry of Heal, including Sir Emeka’s native state of Anambra.

The project is made possible by a $10 million grant from the Sir Emeka Offor Foundation (SEOF), and it will help reach the goal of eliminating river blindness from the world’s most endemic country by 2020.

“The new resources from the Sir Emeka Offor Foundation will extend the reach of the Carter Center’s work in South East and South South Nigeria and help accelerate river blindness elimination throughout Nigeria at a pivotal time,” Carter said. 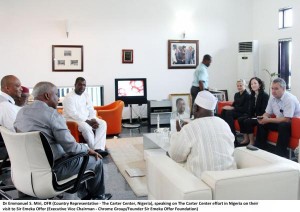 The former president’s health programs have actively collaborated with the government of Nigeria to eliminate and control diseases in Africa’s most populous country since 1988.

The $10 million multi-year commitment by Sir Emeka is the largest grant from an individual African donor in Carter Center history, and the new resources will fund two-thirds of the Carter Center’s expanded interventions against river blindness in Nigeria to help meet the five-year target to eliminate river blindness nationwide.

Since 2013, with an initial gift of $250,000, the SEOF has been a valued partner to the Center’s River Blindness Elimination Program, helping to change the face of philanthropy and inspire more African engagement and support.

“I am deeply honored to work closely with the Carter Center, through the Sir Emeka Offor Foundation to help eliminate river blindness in Nigeria,” said Emeka, founder and chairman of the SEOF, a charitable organization focused on health, education, and empowerment in Sub-Saharan Africa.

Emeka went on to say that “Nigeria has more cases of river blindness than any other country in the world. Yet, we know that with adequate resources, hard work, and perseverance, we can defeat this terrible neglected disease that can steal a person’s ability to see the beauty of the world in which we live and to enjoy a full and active life.”

At the Atlanta-based Carter Center, more than 300 individuals from the Atlanta and international communities attended the official signing ceremony and learned more about river blindness elimination efforts. Spread by the bites of infected black flies that breed in rapidly flowing streams, the river blindness parasite causes dreadful eye and skin disease affecting millions of the poorest people in 36 countries in Africa, Latin America, and Yemen.

The Carter Center began a partnership with Nigeria to reduce the prevalence of neglected diseases, such as river blindness, knowing that the Center’s assistance could make great impact in Africa’s most populous country.

Nearly half of the world’s river blindness cases are in Nigeria; it is estimated that up to 31 million Nigerians need treatment to prevent unnecessary suffering caused by this ancient disease.

For nearly two decades, the Carter Center has assisted the Nigerian Ministry of Health in nine states to fight river blindness in this highly endemic country through community-based health education and mass drug administration of Mectizan®, a microfilarial drug donated by the U.S. pharmaceutical company Merck.

Until recently, scientific communities widely believed that river blindness could not be eliminated with drugs and health education alone in Africa, in part due to its high prevalence and the challenges to delivering health services in the very remote areas afflicted by the condition.

In February 2013, the Federal Minister of Health of Nigeria announced the country’s bold goal of nationwide elimination of river blindness by 2020. Formally moving from control to elimination is a turning point in Nigeria’s river blindness strategy, requiring that intervention efforts intensify to wipe out once and for all the parasite causing the disease. Unlike in a control program, success in an elimination program means a country’s precious health resources can be freed and reallocated to fight other diseases.

“Since its inception in 1996, the Carter Center’s River Blindness Program has improved coverage, increased the population it assists, and shown great impact on disease prevalence in Nigeria,” said Dr. Emmanuel Miri, country representative of the Carter Center’s health programs in Nigeria.

“Today’s unprecedented donation from Sir Emeka Offor Foundation will allow us to ramp up the program and close in on elimination, impacting many more people in southern Nigeria,” Miri continued. “With SEOF and the Nigerian government, we believe we can surpass the caliber of success we’ve already demonstrated and will meet the 2020 river blindness elimination target in the states where we work.”

In 2014, the Center assisted the Nigerian Ministry of Health to provide health education and Mectizan treatment to nearly 7 million people in more than 16,000 villages.