Cauldron of proposed transportation projects is a challenge to monitor, even for experienced policy makers

So many big transportation proposals for metro Atlanta are in the cauldron that even some top policy makers have trouble keeping pace.

As GRTA board member John Sibley III said of one region that has two major projects planned and a study underway: “I have a problem seeing what is likely here.” 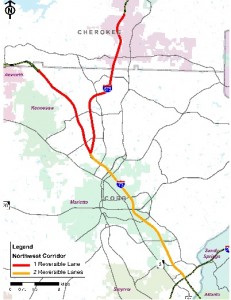 Reversible lanes would be installed on I-75 and I-575 under a plan released by Gov. Nathan Deal. Credit: GDOT

Sibley got his questions answered about the I-75 and I-575 corridor, in Cobb and Cherokee counties. However, the answers prompted his colleague, Dick Anderson, to wonder aloud about the campaign message for the July 31 sales tax for transportation.

“I know the advertising is about: ‘These projects for these dollars,’” said Anderson, vice chairman of the Georgia Regional Transportation Authority.

“But there’s a bigger story. We are making a major shift in investment to optimize 75, and in addition are building a transit investment,” Anderson said. “This is an example of the necessity of understanding all the moving parts … and if not told, it becomes confusion.”

The Northwest Corridor is, indeed, a prime example of the “bigger story” that’s at the heart of the sales tax proposal to fix roads and provide transit in the 10-county metro Atlanta.

In just this one corridor, more than $1.64 billion worth of highway and transit projects are planned – a highway project proposed by the state, and a bus system to be paid for with proceeds of the proposed transportation sales tax. Adding to the brew is the independent transit planning study now being conducted by Cobb County. 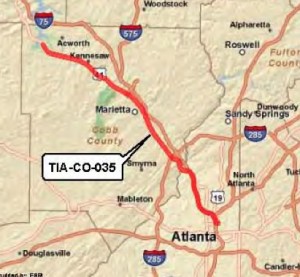 This is the route of the bus system that would be installed if voters approve the proposed transportation sales tax. Credit: ARC

The highway project, tagged at $950 million, is a planned reversible-lane system that Gov. Nathan Deal unveiled last week. For this project along I-75 and I-575 to launch, a private-sector partner would have to pony up from $95 million to $190 million, according to the state’s plan.

But the Northwest Corridor is more complicated than that.

Consider Cobb County politics. The bus service initially was envisioned as a light rail network. But after a flurry of protests in Cobb last year, the planned light rail system was replaced by enhanced bus service. The extra money that had been carved out for light rail, but not needed for a bus system, was redirected to roadway improvements.

Meanwhile, Cobb County officials in August began work on their own analysis of the impact transit could have on the area flanking I-75 and U.S. 41. This process, which is completely independent of the projects to be funded if the sales tax is approved, has been underway for years in various forms.

This route would seem to be a plain vanilla project. Priced at $700 million, the line would connect MARTA’s Lindbergh Station with a new station near Emory, to serve the campus and the burgeoning health complex and related developments nearby.

However, the long-term vision is more complicated. Presuming the line toward Emory is built, and additional construction money can be found, the Clifton line eventually would be extended to serve the DeKalb Medical Center and connect with MARTA’s East-West line at the Avondale Station.

MARTA’s board has added an additional extension of the East-West line. This one, also unfunded, is said to be an early favorite of federal transit officials.

This route would extend MARTA’s existing line from its end at Indian Creek Station and turn it south toward I-20, then bend east and continue along I-20 to a new terminus station at Mall at Stonecrest.

All these projects are dependent upon construction funding that is still just a glint in the eye.

Going back to the bus line planned for the Northwest Corridor, GRTA board member Al Nash put that project in perspective in a brief exchange with Faye DiMassimo, director of Cobb’s Department of Transportation.

Nash: “If I were a Cobb County resident, what difference does it make if the [sales tax resolution] passes or doesn’t pass?”

DiMassimo: “If it passes, we’ll build something. If it doesn’t, we won’t. We won’t have money to build or to seek federal funding.”