The complexion of leaders in the Atlanta region totally changed with the elections in 2020.

Not so long ago, the overwhelming majority of commission chairs of the 10 metro counties that make up the Atlanta Regional Commission were white males.

Today, eight of the 10 commission chairs are Black, and four of them are women. That leaves only two of region’s counties chaired by white males – Cherokee and Fayette. If one includes the mayor of the city of Atlanta (an official member of ARC), that would bring the total to five Black women.

The changing profile of Atlanta’s metro leaders bodes well for stronger regional cooperation, according to several of the women commission chairs.

The most pronounced change in leadership that occurred in 2020 was the election of Lisa Cupid as Cobb County’s commission chair and Nicole Love Hendrickson as Gwinnett’s commission chair. Both were the first Black chairs of their respective counties, two of the most populous counties in the region and state. 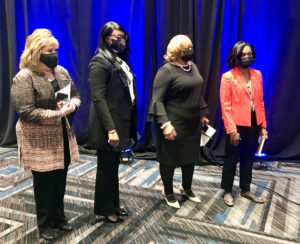 The Council for Quality Growth recently held a “fireside chat” (both in person and on-line) with four new commission chairs in the region – all women. In addition to Cupid and Hendrickson, the fireside chat included Carlotta Harrell, the newly-elected chair of Henry County, and Cindy Jones Miller, chair of the Forsyth County Commission. Forsyth is not in the ARC region, but Miller is doing all she can for her county to officially become part of the Atlanta region.

The other woman commission chair in the region is Romona Jackson Jones, chair of Douglas County. Jones was elected four years ago as the first African American to chair the county commission, so she was not included in the fireside chat of new chairs.

“There’s history being made at the Atlanta Regional Commission,” said Emerson Bryan, who retired in 2017 after 44 years at ARC. “It’s historic in terms of African America representation as well as female representation and political representation.”

When he first arrived in Atlanta to join ARC in 1973, none of the counties’ commission chairs were black. The city of Atlanta did elect its first Black mayor that year – Maynard Jackson.

Bryan credits the change in leadership to metro Atlanta’s changing demographics. Not only have more Blacks moved from the inner city to the suburbs, but new residents to Georgia have gravitated to places where they can afford to live. Also, people of color – Blacks, Latinos and Asians – are among the fastest growing populations in the region.

“At one time, the suburban areas were predominantly white,” Emerson said. “But even then, there were large pockets of African Americans in the town centers, such as Lawrenceville, Marietta, Jonesboro.”

When asked how having women leaders could change the dynamics in the region, the new commission chairs were hopeful.

“It’s fabulous,” Forsyth’s Jones said in an interview after the program. “Having ladies in public office is a wonderful thing. Women in general tend to be very thoughtful.” 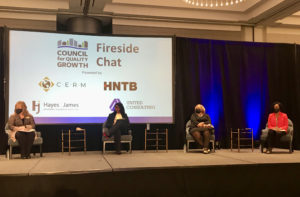 “Personally, I think women are more passionate about the issues,” she said. “They can come to common ground and collaborate a lot better. Women are more nurturing.”

Hendrickson, who is following Charlotte Nash as chair of Gwinnett, said “women are going to be the ones to get things done.”

And she made a commitment that Gwinnett would be actively engaged in regional collaborations.

“Gwinnett has always been a key player with ARC,” she said, mentioning water and transportation. “We have to be part of those regional conversations.”

Cupid talked about how the new leaders can help spark greater momentum across the region.

“The counties changed before the leadership changed,” she said. “Now we can do something about it. There’s momentum across the region. We have to be at the table.”

During the fireside chat, the women county chairs all spoke about the need to have greater regional cooperation on several issues, such as transportation and affordable housing, which Hendrickson preferred calling workforce housing. She lobbied for a seat on ARC’s affordable housing committee.

“I would love to have rail go through Henry and all the way to Macon,” she said. “We really have to embrace the opportunity of rail throughout the region.”

Hendrickson said Gwinnett would continue studying transit, even after November’s defeat of its latest transportation referendum.

“We have to figure out how to get people around the county,” she said. “We have to be competitive in the region if we are going to attract high-paying jobs. It’s a challenge we have to address.” 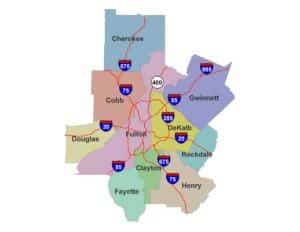 Richard Florida, an urban affairs specialist who has written about the evolution of the creative class, said during a Zoom meeting with the Business Journals last week that the most successful regions will be those where the city centers can work cooperatively with the suburbs.

In fact, he took it a step further by saying federal funding to help bail out local governments should include incentives for jurisdictions to work more closely together.

“We are going to see winners and losers,” said Florida, adding that winners will be places with great amenities, great research universities and a major airport. “People want to work on great projects with great people in great places and great spaces. Cities should be focused on attracting talent… For cities, talent has become the name of the game. Recruitment of companies is not where it’s at. In many ways, this whole pandemic has made the creative class and amenities even more important.”

Because people can “vote with their feet” by moving to the most attractive places, regions need to work cooperatively to improve their quality of life to attract talent. “That’s what generates growth,’ Florida said.

Michael Paris, president and CEO of the Council for Quality Growth, said the region is witnessing a change away “from the old guard” style of leadership.

And the impact is greater than just Atlanta.

“At the end of the day, Georgia’s success depends on Atlanta’s and metro Atlanta’s success,” Cupid said. “We have to be part of the regional conversation. We have got to be able to address the issues broadly.”

The Atlanta Regional Commission currently is comprised of the 10 metro counties and the city of Atlanta. According to research, Atlanta Mayor Keisha Lance Bottoms has not attended one ARC board meeting in her three-plus years in office, so she hasn’t even been sworn in as a member. I sent an email to her press office asking why she hasn’t attended even one ARC board meeting. Her press office acknowledged receipt of my email, but it did not provide a response as of press time. The city, however, is represented on the ARC board by Atlanta City Council President Felicia Moore, who announced last week that she is running for mayor.

“It is an exciting time for voices that have not traditionally been heard and been a part of regional discussions,” said Moore, who has met several of the new county commission chairs. “I’m really excited that their voices will be heard because it’s needed, it’s needed now more than ever for us to have a reflective voice in these regional discussions.”

I did some historical research for this column to track the growing diversity in the region. As best I can tell, the first Black commission chair in the region was Michael Lomax, who was elected to the Fulton County’ Commission in1978 and served as chair for 12 years from 1981 to 1993.

Lillian Webb became chair of the Gwinnett Commission in 1984, and she appears to have been the first woman chair in the Atlanta region. Liane Levetan became CEO of DeKalb County in 1993, succeeding Manuel Maloof of Manuel’s fame. Vernon Jones, who followed Levetan, was the first Black CEO of DeKalb who was elected in 2000.

Governments that make up the Atlanta Regional Commission

*Forsyth County is campaigning to join the Atlanta  Regional Commission:

Previous Article
The One
Next Article
To knock out COVID-19, we may have to vaccinate the undeserving