Today, city leaders plan to reimagine the space as a site of commemoration and recreation. (Photo courtesy of The Conservation Fund.)

The Chattahoochee Brick Company, now a vast, overgrown industrial plot nestled in Northwest Atlanta, was the site of some of the greatest injustices in our state’s history. Today, though, the city is reclaiming that space. After over a year of negotiations, the City of Atlanta is finally set to purchase the site later this summer, with plans to transform it into a memorial and city park. 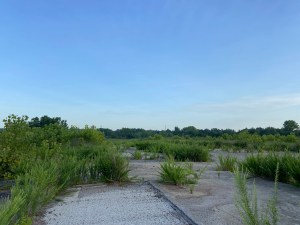 The site was used for industrial work until the early 2000s. (Photo by Hannah E. Jones.)

On June 22, The Conservation Fund purchased the land for around $26 million — with the help of The Kendeda Fund — from Lincoln Terminal Company, the site’s most recent owner. As the city’s primary land acquisition partner, The Conservation Fund was instrumental in crafting this deal and will temporarily own the land until the city is prepared to buy it within the next month or two.

The deal has been in the works with Lincoln Terminal for about a year, with support from former Atlanta Mayor Keisha Lance Bottoms and current Mayor Andre Dickens. The plan almost fell apart, though, when it was announced prematurely by the city. 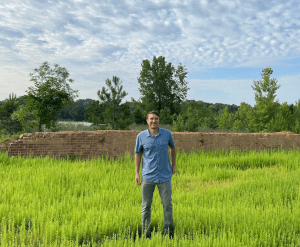 “When the deal was initially announced, we were very close but weren’t quite under contract,” said Stacy Funderburke, The Conservation Fund’s regional counsel and GA-AL associate state director, who has worked to broker this deal. “[Lincoln Terminal] received a back-up offer and it took a lot of work to make sure we could stay at the table and reach a deal. Even though there was an announcement last year, it wasn’t until January or February of this year that we were finally under contract, with a June closing.”

As for the site itself, the 77-acre plot was a place of great darkness from 1880 to 1908 when local prisoners were forced to serve time by working for the brick manufacturer. They faced horrific, inhumane conditions akin to slavery, and some lost their lives.

Today, city leaders — with the help of local institutions — plan to reimagine the space as a site of commemoration and recreation to reckon with its dark history and look forward to a brighter future.

“I really think this is the most important green space acquisition that I will work on because of the historic nature of the site and finally having a place where people can memorialize what happened to the Chattahoochee brick workers in the convict lease labor system,” Funderburke said. “The history of this site alone would justify the acquisition for green space and the memorial.” 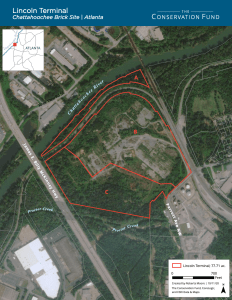 The 77-acre site. (Map courtesy of The Conservation Fund.)

“One day, you’re going to be able to get on a bike in downtown Atlanta and come out to the site that memorializes the Chattahoochee brick workers and what happened here. That’s pretty remarkable to think about,” Funderburke said. “Those opportunities don’t come around very often nationally, much less in Atlanta — the heart of the Civil Rights Movement and home of Martin Luther King, Jr.” 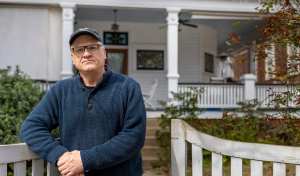 Professor and Pulitzer Prize-winning author Douglas Blackmon is a local expert on the site, having researched its history extensively while writing “Slavery by Another Name.” He continues his research today by building profiles of those who worked there and searching for their descendants.

In his book, Blackmon explained the corrupt legal system in Atlanta during the late 1880s to early 1900s. During that time, the state would host a bidding process where companies could pay the local government in exchange for prisoners — primarily Black men — who were forced to serve their sentence doing manual labor.

The site was even sometimes referred to as a penitentiary throughout those three decades, Blackmon said. It’s difficult to track exactly how many people worked at the site, but there were no less than a couple hundred laborers at a time over the 30 years.

“The working conditions were abominable. They were whipped almost incessantly and suffered from malnutrition,” Blackmon told SaportaReport. “[The workers] produced millions and millions of bricks that were purchased by the City of Atlanta and then used to pave the streets and sidewalks of the city. There are still thousands of Chattahoochee Brick bricks beneath our feet in downtown Atlanta and older neighborhoods.” 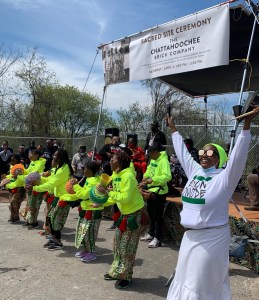 In April, community members gathered to honor those who suffered at the former brick company site. (Photo by Kelly Jordan.)

Some of the prisoners had committed serious crimes, Blackmon explained, but others were convicted of manufactured crimes like vagrancy.

“Almost any African American man in the South was vulnerable to a vagrancy charge because almost anybody could confront a Black man and say, ‘Prove to me that you’re employed,’” Blackmon said. “If you couldn’t prove that you were gainfully employed, then you can be arrested for vagrancy. This was also in an era when people were paid in cash, and nobody had pay stubs.”

There’s even a record of people kidnapping Black residents and bringing them to the brick company in exchange for money, Blackmon added.

“All of this was basically state-sponsored human trafficking,” he said. “All of these processes re-established the old systems of slavery.”

Under this new project, the city and stakeholders have the opportunity to revitalize the historically industrial site, breathing new life into the space through remembrance and celebration.

Local partners like the National Center for Civil and Human Rights, Partnership for Southern Equity and the Chattahoochee Brick Company Descendants Coalition have assembled committees to explore best practices and various options to honor the workers and their descendants. 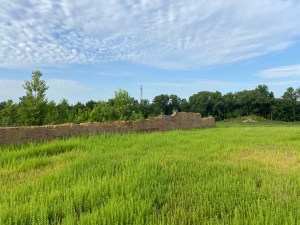 One of the few pieces of remaining infrastructure. (Photo by Hannah E. Jones)

Blackmon feels that preserving the few pieces of remaining infrastructure — like a brick wall, tunnels and a railroad bed — is paramount to telling the story.

“I think that preserving some of those historical features and using them to explain what really happened there and the significance would make a lot of sense,” Blackmon said. “It was forced laborers who built Atlanta in so many ways, and the accomplishments they were part of needs to be remembered, but also the suffering and indignities they endured.” 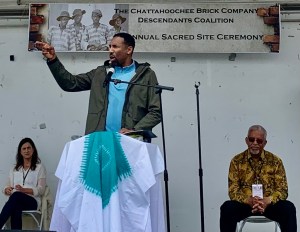 For the City of Atlanta, this is a full-circle moment. Former mayor James English owned the Chattahoochee Brick Company, and today, the city’s mayor is dedicated to reclaiming the space.

“It’s heartening to think about how far we’ve come. Don’t get me wrong; there’s still a long way to go,” Funderburke said. “But I think the city putting everything behind protecting this site and maybe being the only location in the Southeast to truly memorialize and educate people about what happened in the convict lease labor system following the Civil War. It’s a pretty big symbolic statement for Atlanta and, really, for the country.”