The Chattahoochee Nature Center is conducting a capital campaign that is to be one of many gauges of the region’s philanthropic capacity as the economy responds to the pandemic of the coronavirus. 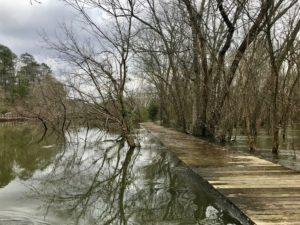 The Wetlands Boardwalk is closed to visitors when it floods during times of large water releases from Buford Dam. The boardwalk is to be raised with proceeds of the current fundraising campaign. Credit: David Pendered

Across the state, non-profits such as the Madison-Morgan Conservancy are deferring fundraising events – including the conservancy’s only fundraiser of the year, a Kentucky Derby party. These non-profit managers are rethinking their balance sheets as contributions pledged in a better economy may not arrive.

At the Chattahoochee Nature Center, the CNC is seeking $1.51 million to close its current capital campaign.

The current campaign is the first of two planned phases in a comprehensive $8.3 million effort. The first phase, a total of $5.65 million, is to pay for a range of projects that are to improve access to, and enjoyment of, an institution located near Roswell. For 44 years, the CNC has presented a window to the wilderness along the northern bank of the Chattahoochee River.

The campaign is nearly complete. The CNC has raised $4.14 million, in money that has been either collected or pledged.

The remaining amount, the $1.51 million, represents 27 percent of the total goal of $5.65 million. The effort to raise this amount is critical, in order to match a challenge grant from Woodruff Foundation.

Major donors have stepped forward to support the CNC. Contributors include: 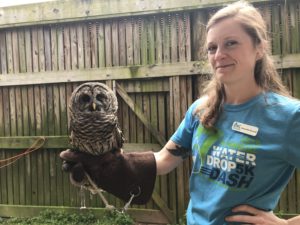 An owl who now lives with only one eye makes its home at the Chattahoochee Nature Center, and rests on the arm of Samantha Kennett. Credit: David Pendered

Laura Turner Seydell, an international environmental advocate, characterized a donation to the CRC in the following terms, in the center’s fundraising brochure:

Children also are provided a voice in the materials. Youngsters represent a major number of visitors.

The CNC reports that about 44,000 students a year visit from about 500 schools in metro Atlanta. Nearly a third of these students are from Title 1 schools, which serve students from low-income households.

Among the quotes from children and parents are these two regarding Camp Kingfisher. Camp fees are the CNC’s major source of income. It serves about, 1,200 youngsters a year and provides about a quarter of annual operating revenues, according to the brochure. Two comments include: 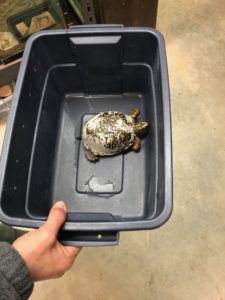 The oil paint applied to the shell of a turtle is being removed in a process that CNC Wildlife Director Kathryn Dudeck says must proceed slowly to protect the creature’s health. Credit: David Pendered

The center’s campaign would be further along, were it not for a miscalculation by the state.

‘The state had named the CNC as being in line to receive a $500,000 state grant from the Department of Natural Resources. However, state officials caught an error after the announcement and, in January, cut the center’s intended grant. It was one of several intended grants eliminated because of a miscalculation in available funds.

The problem stemmed from a miscalculation of the sum of money available to improve outdoor destinations. Officials initially based the sum on all sales taxes collected on outdoor goods. The sum was reduced when state officials realized that they had included local taxes in the initial summation, although only state taxes are eligible for grant-making funded by the Georgia Outdoor Stewardship Act. GOSA allocates up to 80 percent of state sales taxes collected in sporting goods stores and outdoor recreational equipment.

CNC officials said state officials urged the center to apply for the next year of GOSA funding, which they intend to do.

A Celebration of Land, Water – And Early Visionaries and Advocates
wpengine August 27, 2018 2:25 pm
Imagining the Future of the Chattahoochee River
wpengine February 12, 2018 4:47 pm

A Celebration of Land, Water – And Early Visionaries and Advocates
Imagining the Future of the Chattahoochee River