This story has been updated to correct the number of toilets produced in Morrow by TOTO USA.

While Florida Gov. Rick Scott is grabbing the latest headlines about water woes and oysters, some solutions to the problem of reckless consumption of water were celebrated Thursday at the TOTO USA toilet manufacturing plant in Morrow. 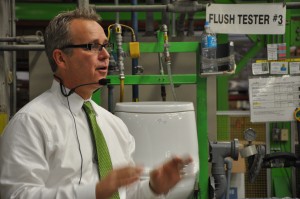 Bill Strang, a senior vice president with TOTO USA, leads a tour of the plant after accepting an award from the Chattahoochee Riverkeeper. Credit: Donita Pendered

The awards recognized successful efforts to reduce water consumption. The conservation steps go to the heart of the oyster problem in Florida, where some Floridians contend the oysters are dwindling in size and number partly because of a shortage of fresh water flowing into Apalachicola Bay from the combined Chattahoochee and Flint rivers.

Sally Bethea, executive director of Chattahoochee Riverkeeper, also took advantage of the awards ceremony to release the group’s latest report card on the region’s water usage: “Filling the Water Gap: Conservation Successes and Missed Opportunities in Metro Atlanta.” The report is an update of a 2011 document of the same name.

Click here to read a copy of the report. Watch this space for an upcoming story about the report.

“We believe our 2012 report again makes the case for water conservation as the most cost-effective, timely, and sustainable water supply option available,” said Laura Hartt, the riverkeeper’s director of water policy who wrote the report. 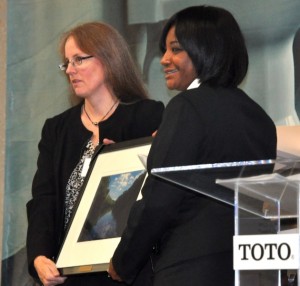 “We are honoring TOTO USA, the city of Atlanta, and the Hartsfield-Jackson Atlanta International Airport as ‘Best in Businesses Class’ because they are showing everyone how it can be done,” Hartt said.

This is the synopsis of the awards released by Chattahoochee Riverkeeper:

Here are excepts of comments by recipients:

Denise Quarles, Atlanta’s director of sustainability – The award highlights the value of collaboration. The administration is committed to improving the energy efficiency of buildings in the city, which will foster jobs and education.

Sharon Douglas, the airport’s director of sustainability – The airport is committed to improving its efficiency, and toward that effort has replaced 630 toilets and more than 1,000 urinals with low-flow units. 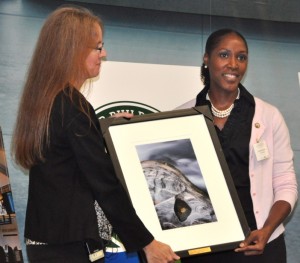 Bill Strang, TOTO’s senior vice president of operations in the Americas – Producing efficient toilets and bathroom fixtures is part of the company’s effort to “do well while doing good.” The plant in Morrow produces 20,00 toilets a month with a diverse staff of 450 workers who speak a total of six languages.

Florida’s governor made news during his trip Wednesday to Eastpoint, on Apalachicola Bay, to hear from local oystermen about the dearth of oysters.

Some blame the drought, some blame the dispersant used to sink oil during the BP oil spill in 2010, and some think too many young oysters were harvested in 2010 out of fear the oil would ruin them for later harvest.

Scott raised the issue of water flow from Georgia, and he suggested that Florida ask Congress to require that more water be released from Lake Lanier in order to increase water flows into Apalachicola Bay.