A view of the Chattahoochee River (Special: Trust for Public Land)

The Chattahoochee Riverlands initiative is moving forward with a pilot project in Cobb County thanks to a $9 million gift from the Robert W. Woodruff Foundation to the Trust for Public Land.

The 2.7-mile project, directly across from the City of Atlanta, stretches from Mableton Parkway northwards to I-285.

George Dusenbury, Georgia director for the Trust for Public Land, believes the demonstration project in Cobb could be compared to the first leg of the Atlanta BeltLine. 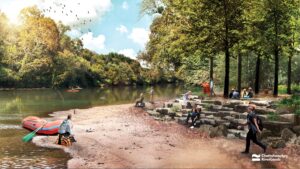 “We believe that this is the most important public realm project in the state of Georgia,” Dusenbury said in an interview. “It will be transformative for the state in the same way the Beltline was for the City of Atlanta. This will be our Eastside BeltLine Trail where we can show people this wonderful public space and how it can be activated so people can really start to reconnect to the Chattahoochee River as it flows through the heart of metropolitan Atlanta.”

In all, the pilot project is expected to cost a total of $43.5 million – with $18.15 million coming from private philanthropy and $25.35 million coming from public sources. The Trust for Public Land also has received a $1 million grant from the Coca-Cola Foundation, and it has until the end of 2022 to raise the remaining $8 million in private funds.

Cobb County also is contributing $14 million towards the project, including $5 million for a tributary trail along Mableton Parkway and up to $7 million in Special-Purpose Local-Option Sales Tax (SPLOST) funding.

“We should be completed within five years,” Dusenbury said. “Our goal is that we would have this 2.7-mile section built out by end of 2025.” 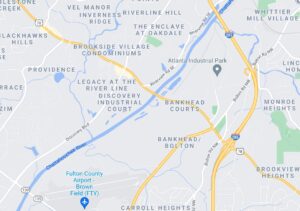 A map showing the stretch of the Chattahoochee River that is part of the pilot project (Special: Google Maps)

The demonstration project is part of a larger 100-mile vision to create publicly-accessible “greenways” and “blueways” along the Chattahoochee River from the Buford Dam in Gwinnett County to Chattahoochee Bend State Park in Coweta County. The study was sponsored by the TPL, Atlanta Regional Commission, the City of Atlanta and Cobb County, which commissioned SCAPE, a New York-based landscape architecture firm, to develop the grand vision.

“I hope I’ve conveyed how, how exciting and how impactful the overall project will be,” Dusenbury said. “The longest journey starts with a single step.”

Lisa Cupid, chair of the Cobb Commission, began working on the vision when she was a district commissioner, who went on a tour of the area along the river.

“I was blown away by its beauty,” Cupid said. “I didn’t realize we had this gem. My initial draw to the project was that it provided access to an asset – the river – that had only been available to people living in East Cobb.”

Doug Hooker, executive director of the Atlanta Regional Commission, agreed the Cobb project is analogous to the Eastside BeltLine Trail, which showed the City of Atlanta and the region how the multi-use trail corridor could transform an area that had been underdeveloped and ignored. 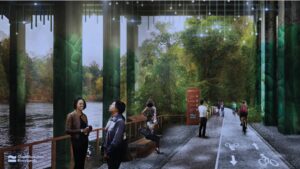 “My hope is that this pilot project would begin to help people realize the vision of the Chattahoochee River by bringing people closer to this wonderful natural amenity in our region and wanting to preserve it,” Hooker said. “What I hope it does not do is lead to the type of intense development the Eastside BeltLine Trail has experienced. That would not appropriate on the river.”

For Hooker, it’s a matter of striking a balance between opening up the river so people could enjoy it but making sure the Chattahoochee can be environmentally healthy.

Cupid also said her office has been working on an affordable housing initiative, and her hope is the county will focus on development policies along the Chattahoochee so that “we can help preserve affordability of along the river.”

Development already has begun on that side of the river with residential communities replacing former industrial areas.

“You’re seeing a lot of that transformation happening in the Smyrna area,” said Dusenbury, who sees the future as a hybrid between the Chattahoochee River National Recreation area and the Atlanta BeltLine. “It can be a place where you can enjoy the natural experience, but you also can go and get a beer or a cup of coffee and enjoy the river.” 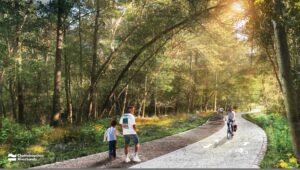 A rendering of the multi-use trail that would be part of the pilot project in Cobb (Special: Chattahoochee RiverLands)

At the same time, the Trust for Public Land secured a $2.1 million grant from the State of Georgia under its stewardship program to create a “Camp and Paddle Trail,” which will start in Standing Peachtree Creek in west Buckhead and continue to the McIntosh Reserve in Carroll County.

“That’s going to be finished within a couple years, and it will allow you to spend four days and three nights paddling and camping from Standing Peachtree all the way down to McIntosh Reserve,” Dusenbury said. People would be able to pull over at Riverview Landing, tie up their kayaks or canoes and “go have a cup of coffee or go grab a bite to eat and then continue down the river.”

The Trust for Public Land still needs to identify another $800,000 for that initiative to be fully funded. 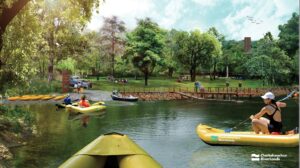 A rendering of one of the boat ramps that would help provide greater accessibility to the river (Special: Chattahoochee RIverLands)

Both Dusenbury and Hooker mentioned Rep. Carolyn Bordeaux (D-Georgia) introduced the “National and Regional Greenways Act,” which would create a grant program for the construction of regionally or nationally significant greenway paths. They believe the Chattahoochee RiverLands project would qualify.

Also, Hooker said that if a deal is reached on a federal infrastructure package or for new transportation investments, it could provide funding for the Chattahoochee RiverLands vision.

“I certainly hope it’s a new day,” said Hooker, who has seen a growing awareness of climate change and greater appreciation of parks and greenspace during the Coronavirus pandemic.  “I think there’s more awareness of how important these places are to our overall wellness and health.”

From an equity standpoint, the Chattahoochee RiverLands project will provide the kind of amenities that have been available to people along the northern stretches of the river. 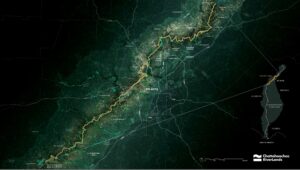 Historically, efforts to transform the Chattahoochee into a regional amenity date back decades. Thirty years ago, TPL opened its Georgia office, and it’s first major project was preserving land along the Chattahoochee River from its headwaters in north Georgia all the way down to Columbus.

“We preserved 18,000 acres and 80 miles of riverfront along the Chattahoochee River,” Dusenbury said. “We raised $50 million in private philanthropy ($25 million from the Woodruff Foundation). We also got about $200 million in public funds for land acquisition.

“It’s been a long journey, and it will continue to be a journey. It’s been a long-term commitment from the Trust for Public Land,” Dusenbury continued. “About six, seven years ago the TPL Georgia Board got together said we preserved all this land, what’s next? We’re about land for people, are we really taking advantage of the land are we providing the access to where the people are? That’s when we launched Chattahoochee 2.0 which is about activating the river by activating the land that we helped preserve.”

For Cupid, it couldn’t be happening at a better time. 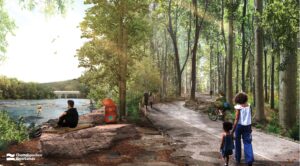 “The pandemic has brought a lot of people outdoors. It has helped to change the things that we value in the community like our natural assets,” she said. “This is a great time to develop an asset when our people are more open to enjoying the natural beauty our region has to offer.”

Eventually, the ideal would be to create a parallel trail along the City of Atlanta side of the river and build a pedestrian bridge near the confluence of the Chattahoochee and Proctor Creek – giving people an opportunity to experience greenways on both sides of the river.

But the City of Atlanta has to make the Chattahoochee experience a priority before work on the eastern side of the river can move forward.

“Three years from now, we would like to be doing for Atlanta what we’re currently doing for Cobb, where we would have a plan, a design, and we would be out there beginning to raise money with the city to help make it happen,” Dusenbury said. “And if it’s not going to happen in the City of Atlanta, then it’s going to be the City of South Fulton or Fulton County. We just want to keep going to get it done.” 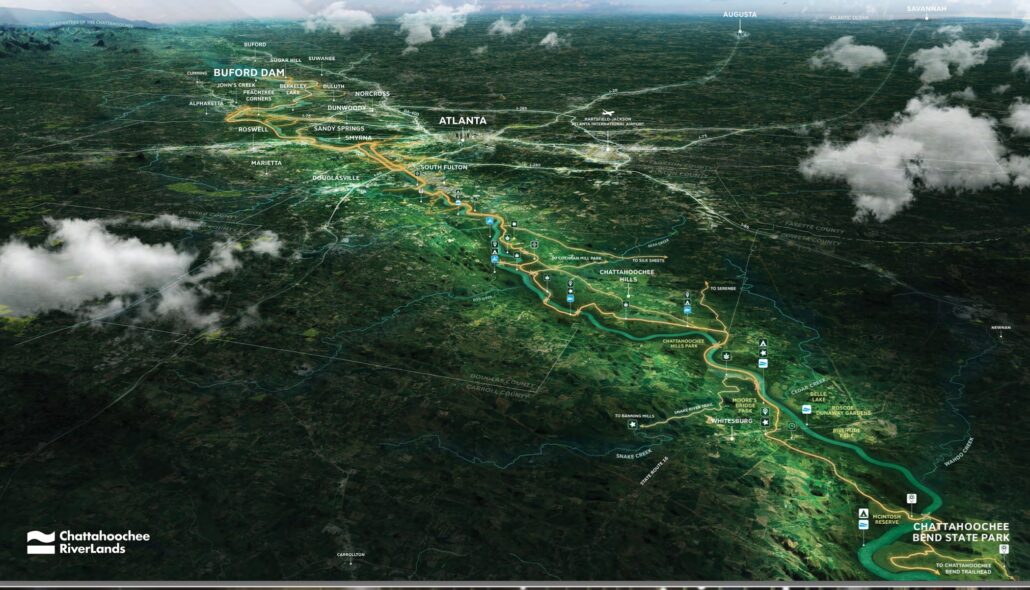 Previous Article
More collaborations, fewer crackdowns, might be future of Atlanta’s historic preservation
Next Article
Peace and Health Go Hand in Hand. We Must Pursue Both.