Editor’s note: This story has been updated to correct a reference to Fort Oglethorpe Mayor Lynn Long.

Visitors to the sacred grounds in the Chickamauga Battlefield in northwest Georgia will enter the park along an enhanced gateway in Fort Oglethorpe once the state completes a project that’s just received a $3 million federal grant. 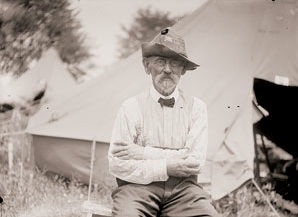 Chickamauga veteran J.J. Dackett was photographed wearing a hat with bullet holes made during the historic battle. Credit: Library of Congress via civilwar.org.

Casualties numbered 34,000 in the three-day Battle of Chickamauga in September 1863. The losses were second during the Civil War only to the 51,000 recorded the previous July at the Battle of Gettysburg.

Today, the main road leading to the battlefield is flanked by towering power lines and disjointed commercial developments. The federal grant will pay for a retooling of 0.8 mile of LaFayette Road to improve its appearance and use by pedestrians and bicyclists.

The Appalachian Regional Commission provided the grant to the Georgia Department of Transportation. The commission’s Georgia division is housed in the Georgia DCA.

“This project will be a game-changer for Fort Oglethorpe and for Chickamauga Battlefield, the nation’s oldest and largest Civil War battlefield,” Gretchen Corbin, DCA commissioner, said in the statement. “The street improvements provided through the [federal] grant will vastly enhance both residents’ quality of life and the visitor experience.” 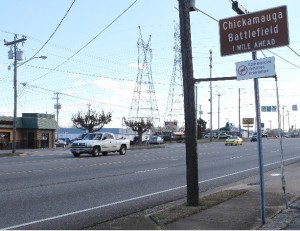 LaFayette Road, the gateway from Fort Oglethorpe to the Chickamauga Battlefield, will be improved by the burial of power lines, installation of sidewalks and bicycle lanes, landscaped median and streetlights, according to the Georgia Department of Community Affairs. Credit: timesfreepress.com

Fort Oglethorpe’s mayor, Lynn Long, wasn’t bashful in proclaiming what the project will mean to his town – known best for its proximity to the battlefield where the Confederacy made its last stand. After the Union Army broke through this area, Gen. William T. Sherman was bent on Atlanta and the March to the Sea.

“This $3 million grant is going to change the face of the historic district of Fort Oglethorpe and LaFayette Road – the gateway to the Chickamauga Battlefield,” Long said in the DCA statement. “This is the most important project for Fort Oglethorpe that has happened in my lifetime.”

Fort Oglethorpe is one of many Georgia towns that attract tourists interested in the people and places of significance in the Civil War. Corbin, who replaced Mike Beatty as DCA commissioner in August 2013, highlighted the grant’s potential to bolster the local economy.

“It’s an excellent economic development initiative that will greatly enhance both downtown development and tourism growth in the area,” Corbin said.

Other states, including Virginia, have created historic byways to promote historical tourism. Former Sen. George Hooks sought to win state funding a decade ago for creation and maintenance of a statewide Civil War tourist trail. Although lawmakers didn’t buy into that idea, they did provide state funding to relocate the historic T.R.R. Cobb House from Stone Mountain Park to Athens.

Click on the graphic for a larger version of the map that shows the route of the Atlanta Campaign, which took place the summer after the Battle of Chickamauga. Credit: belles-rebels.com

In metro Atlanta, promoters have sought to establish a Civil War trail between Marietta and Roswell. The project went by a number of monikers including “Southern Belles to Rebel Yells,” but various websites fell out of use during the Great Recession.

The Chickamauga and Chattanooga National Military Park was dedicated in September 1895, according to civilwar.org. Founders intended for the expansive park to commemorate battlefields on which more than 100,000 Union and Confederate troops fought over control of railroads and the city of Chattnooga, known as the “Gateway to the Deep South.”

“The park was the first national military park and would be followed by Shiloh, Gettysburg and Vicksburg. Reflecting the desire to use the battlefield for military study as well as a memorial, the park was managed by the War Department and was used as a training ground for the Army. In 1933, the National Park Service assumed control of the battlefield as part of a broader effort to consolidate management of federally preserved sites.”

The Civil War didn’t mark the end of bloodshed on the Chickamauga Battlefield, according to the National Park Service’s website:

“More American soldiers died in training on the Chickamauga Battlefield during the Spanish American War than died during that four month long war.” 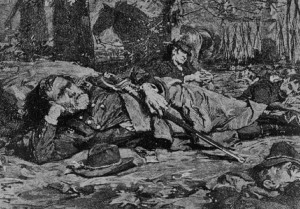 The Battle of Chickamauga cost a total of 34,000 casualties, the Civil War’s most costly confrontation after the Battle of Gettysburg that had been fought two months earlier. Credit: Battles and Leaders of the Civil War via georgiaencyclopedia.org.

Previous Article
Mayor Reed’s success over next four years may hinge on who did, and didn’t, vote in November election
Next Article
SCLC joins effort to honor Martin Luther King, Jr. with statue at Capitol