A scary situation — the rise of childhood obesity in Georgia

When you see the stark ads of fat kids in Georgia, don’t turn away from the scariest thing you may see this season.

As hard as it may be, take a long look. What’s happening to their health should shock everybody – and lead us to fitter future generations.

The ads, which have been running in print, outdoors and on TV, are black and white and right to the point.

“I’m 7 years old. I don’t like going to school because all the other kids pick on me. That hurts my feelings,” says a local girl named Tina, among the child actors who answered a casting call for the ad campaign commissioned by Children’s Healthcare of Atlanta.

The TV ads end with a boom, like a segment of “Law & Order.” The message: “Stop sugarcoating it, Georgia.” 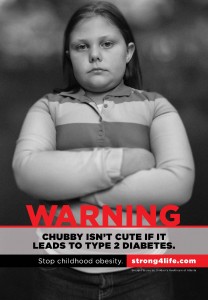 This poster is part of an ad campaign targeting childhood obesity in Georgia, where 1 million children are overweight or obese. (Photo: Childrens Healthcare of Atlanta)

These are messages meant to haunt us, and they should.

As a mom of two kids aged 11 and 13, I’m around children a good bit. I see super-sized kids, way more than when I was growing up.

The problem is easy to ignore one child at a time. They’ll lose the baby fat; they’re just a little chunky; that’s not my kid anyway.

But the stark ads are a stabbing indictment that these are all our kids – 1 million of them in Georgia, according to CHOA. Their health directly influences our checkbooks, national security, and something even more important – our collective hopefulness.

Being overweight saddles children with life-threatening diseases such as hypertension, Type 2 diabetes and heart, liver and kidney disease. Under our current health care system, we’ll all be paying, one way or another, for those problems.

Their weight bodes ill for our future defense. Last year, the Pentagon reported that 75 percent of young adults aged 17 to 24 are “too fat to fight,” so we really need to start raising crops of leaner kids.

But the biggest reason to do something — what tugs at me the most when I see their woeful eyes and round faces — is the reflection on my generation. It’s what Carolina Cruxent, director of wellness marketing for CHOA, who managed the development of the ad campaign, said:

“This crisis could lead to these kids being the first generation to not live as long as their parents.”

That prospect should chill us to the core. Our collective DNA as Americans says that should not be. We’ve always optimized the future, and children have always embodied that – until their bodies today started to inflate, and we turn away.

Without our children, where is our hope?

I cringe at, but have to admire, CHOA’s strategy ahead. These ads lay the foundation for even tougher messages to come, Cruxent said.

“We must first raise awareness of this issue and get families to accept that this is a health crisis, so that we can begin to come together for solutions,” Cruxent said. “Awareness… is only the first step. ‘Tough love’ is just the beginning of addressing this issue.”

CHOA is trying to bring together parents, caregivers, schools, doctors and government officials to address this public health crisis. They’re trying to form a critical mass against body mass, through the Boys and Girls Clubs, the YMCA and others.

“We believe that in five years, we can move Georgia out of the top 10 states in childhood obesity rankings,” Cruxent said.

Moving that statistic will be like successful dieting – a series of consistent, targeted steps over time, that culminate in meaningful change. Families may start by swapping potato chips for whole-wheat crackers, or walking to the bus stop instead of carpooling. [For more ideas and resources, CHOA has some resources at www.strong4life.com].

My personal campaign will be to stop complaining about – and buying — sugary fundraisers (like cheesecakes and cookies) that my middle schoolers take part in. I will start by getting involved to find healthy alternatives. Could we partner with nearby organic farmers to show our children a way to keep our dollars local and our bodies healthier?

What about you – what are you doing to counter this crisis? I would love to hear and share it. My email is below.

Hopefully overweight children won’t simply shock us, but move us to action. We must come up with more creative choices. We must give our children — and their children — a healthier start, or we all suffer in the end.