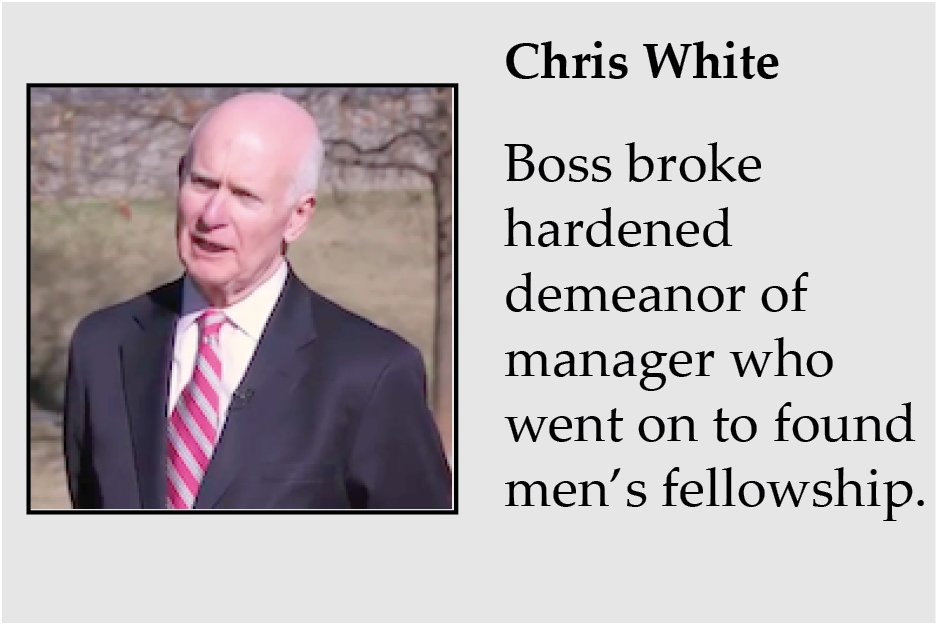 If a boss in Philadelphia hadn’t called Chris White into his office one moment 35 years ago, hundreds and perhaps thousands of men in Atlanta would be a lot more spiritually adrift today. Count me as one of them.

Raised in a New England home in which the Bible was neither seen nor heard, Chris headed to New York and a career in corporate America following college and four years in the Navy. Charging ahead with all the grace of an agitated bull tracking a matador’s red muleta, Chris was bound to succeed – at least in the office.

“I was in my mid 30s and was a junior executive with the IBM Company,” Chris recalled. “I had moved from the super salesman role in New York to a field management position in Philadelphia. I worked for Art. I was there about six months and Art called me into his office.

“He said. ‘Sit down!’ and I knew I was in trouble, cause his lips were shaking a little bit. He was nervous. He said to me, ‘Chris, 12 people have been in here in the last three months to tell me that they’re all gonna quit if you don’t leave.’ ”

That was the first crack in the hardened outer shell of Chris White. “I was failing at home as a husband and a father. I felt out of place. I was becoming angry and confused,” he writes on his website. Soon, more men entered his life. Some wrestled him into reading the Bible and trusting God, eventually leading him to faith in Jesus Christ. This just a month after his wife Suzanne found the Lord through a women’s group.

One of the cool things about Jesus is when he was finally ready to lead men at age 30, he just walked up to 12 men and said, “Follow me.” Later, the apostle Paul wandered the eastern Mediterranean, telling men and women everywhere to “Just believe.” Living in Atlanta 30 years ago, Chris met four men for coffee and prayer in a public restaurant – “paying it forward” if you will – in appreciation to the Lord and the men who had reached out to him.

Within four years, a hundred men were walking into a restaurant at 7am each Friday to hear Chris lead them through a a few passages of the Bible, sometimes taking more than a year to get through one book. The men then break into tables with four to eight for another 30 minutes of leadership and fellowship.

With Suzanne’s support, he founded the Friday Morning Men’s Fellowship and went to work each day in an 80-square-foot office. Lonely at first – a preacher likes to preach – Chris incorporated as Leadership Ministries and watched his ministry grow quickly. Today, with his small staff in an Atlanta office, Chris can look back on a brilliant case study of word of-mouth marketing at an intimate, spiritual level. Chris and team counsel men to be leaders in the office and servants to their wives and children at home.

Focusing on just a few verses on a Friday morning, Chris will often step away from the podium at On The Border restaurant on the Buckhead Loop to tell a personal story. Many anecdotes recount how he once was lost but now he – sometimes with the occasional humbling assistance of the graceful Suzanne – is not only found, but bound and determined to bring other men to the Lord as sincerely and genuinely as humanly possible.

For more than 30 years, men in Atlanta have quietly approached others, inviting them to join the Friday Morning Men’s Fellowship for 60 minutes of coffee, doughnuts and spiritual awakening. And an awakening it is. Now in his early 70s, Chris’s voice and unvarnished summons to study “the text” is as clear a call as a man can hear from the ministry today. As men moved around Atlanta and the world, they found they missed Chris’ ministry and message. Many asked if they could start similar groups around town or in cities as far away as Capetown, South Africa.

Casting a wary eye towards the large bricks-and-mortar churches that tower around him, Chris does not like to waste time. He’s been known to ask a person sitting on a plane next to him about their spiritual life – after gently engaging them in pleasant conversation, of course. With Orthodox Jewish neighbors, Chris sometimes prudently reminds them that “Jesus is Jewish.”

“Helped a lot of men over the years,” Chris said, quickly adding, remembering that moment in his boss Art’s office 35 years ago. “I’m the biggest beneficiary, of course.”

Next week in Moments: Steve Nygren, who retired with his family to Serenbe in south Fulton County, only to re-emerge as a catalyst for preservation and smart growth.