A good memoirist roots out details and meaning from the dark corner of a life. Her work shines light on a universal truth. 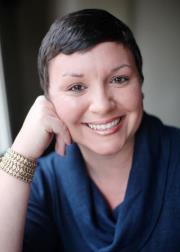 While Christal Presley was doing all that — uncovering her and her father’s scars from his service in Vietnam — she also ended up unearthing subterranean trouble familiar to other city of Atlanta homeowners:

Despite minimal water each month, and even in a city beset by the highest combined water and sewage bills in the country, Presley’s bills were about double her neighbors’.

To write her book and solve her water problems, she had to probe what for too long had seemed normal.

Answers came from questioning authorities – first her own father, and then the city of Atlanta.

In 2009, Presley bought the two-bedroom, single-bath 1950s cottage in the East Atlanta neighborhood of Woodland Hills. Solid, tidy, secure – it fit her. She was working in her current job as an instructional mentor for public schoolteachers and getting a Ph.D. in education.

By nature, Presley is no rebel. When her bills came, she paid them – just like good homeowners do.

“My water charges were bundled into a package with my electricity, security, gas, and trash collection,” she said. “I had heard the water bills were ‘high,’ but I didn’t know what ‘high’ really meant. My first water bill in the new house was over $150. I thought, ‘Wow.  People were right.  Water bills ARE high.’ ”

City of Atlanta homeowners are saddled with high rates to help pay for a federally mandated $4 billion upgrade of the city’s aging sewer system.

As she began watering her small garden, her water bills went to $250 per month. Installing rain barrels would not dent that much.

“On the news I kept hearing about high water bills and water meters that were reading incorrectly,” she said, “but honestly, I figured the chance mine was defunct was slim to none.”

Don’t most of us think we live pretty ordinary lives?

For Presley, “ordinary” also meant anxiety and stress, anger and nightmares, and reluctance to make friends. Around this same time, she had been in therapy, opening up about life with her Vietnam vet dad – a teenaged draftee who returned home to the Virginia mountains mentally battered.

“My father could be absolutely fine one minute, and if someone dropped a plate, he’d turn on a dime and go berserk,” she said. “My childhood was spent living in survival mode.”

His father’s reaction to his war trauma had ended up traumatizing her. Her diagnosis: intergenerational post-traumatic stress disorder.

“I had been carrying this secret of my childhood around for so long that it was eating me alive,” Presley said. “Something had to change.” 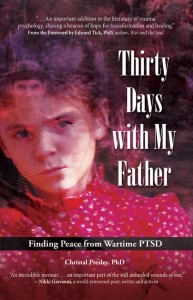 Cover image from Christal Presley's memoir, "Thirty Days with My Father: Finding Peace from Wartime PTSD” (Health Communications). It will be published in November.

That something became “Thirty Days with My Father: Finding Peace from Wartime PTSD” (Health Communications). Its November publication is timed to Veterans Day.

Her memoir chronicles the dialogue she opened up with her father about Vietnam, and how that war affected her. Most importantly, the book demonstrates how families might tackle painful secrets together.

A former schoolteacher of Presley’s wrote to say the book touched her as good memoirs do, by highlighting that we are all “molded by our everyday experiences.”

In the thick of writing her manuscript, Presley happened to complain to a neighbor about her $250 monthly water bill.

A woman who had delved into painful childhood trauma doesn’t flinch at taking on city government.

The city’s Department of Watershed Management determined her meter was functioning well. A plumber found no leaks.

“I called the city back, explaining that my water bill was astronomical compared to my neighbors–and that I didn’t understand how my meter could possibly be functioning properly,” Presley said. “The person I spoke to at Watershed Management said there was nothing she could do.”

Another year went by.

Presley came home one day to find an auditor hunched over her water meter. 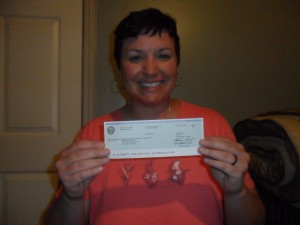 Christal Presley with the check sent by the city of Atlanta reimbursing her for overbilling her water charges. The amount: $4,799.

“He explained that the pin in my water meter was not secure, and readings would definitely be off,” she said.

Presley also secured the help of Carla Smith, her city council member. A third person from Watershed Management came out.

“The actual reader itself was the wrong one entirely for my water meter, and he guess-timated that I was paying at least double what I should have been,” Presley said.

Two days later, she had a whole new water meter. A month later, the mailman brought the envelope – a reimbursement of $4,799.

Presley is investing the overpayment into marketing of her book. The lesson of both stories, she says, is that “perseverance pays off.”

It’s also the courage to not let life drip by, satisfied with the status quo. To seek what is right and true, despite cost or magnitude, can enrich a person. Even an “ordinary” person like Christal Presley.

Previous Article
Atlanta’s $265,000 plan to create jobs paid for by AHA, CAP, Georgia Power; to hit street in time for 2013 election
Next Article
Igniting the ‘common-sense middle’ hasn’t been easy to accomplish