She’s been played by everyone from Brandy to Drew Barrymore, from Lily James to Lesley Ann Warren. Her wicked stepmothers have ranged from Cate Blanchett to Anjelica Huston to Jennifer Coolidge to Bernadette Peters. Her marvelously magical Fairy Godmother?  How about Whitney Houston, Helena Bonham Carter and Celeste Holm? 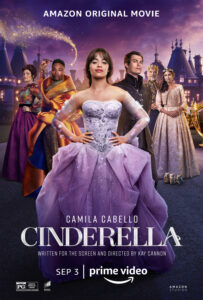 The newest iteration with Camila Cabello in the title role, mixes the Latinx flash of Linn-Manuel Miranda’s “In the Heights” with the jukebox whirl of such “period” pieces as “The Knight’s Tale.”

This “Cinderella’ is bright. It’s light.  It moves right along.  It has an endearing lead, a post-feminist message and, of course, Billy Porter as an oh-so-21st-century Fairy Godmother. Reasonably entertaining? Yep, especially when Cabello is front-and-center.

But do we really need another “Cinderella?”  About as much, I guess, as we do another “Sleeping Beauty” and Angelina Jolie is making some bucks off that franchise – without even having to prick her finger.

This time around, Ella (as in Cinder…) doesn’t – as far as I can tell – spend much time in the cinders. In fact, she lives in a pretty nifty basement that’s nicer than my place in the East Village a few decades ago. And her stepmother and stepsisters aren’t so much wicked as dismissive and self-centered. I mean I never saw this Ella sweep a single cinder.

She doesn’t have time. But she’s not dreaming of a prince to sweep her off her feet. She needs to get her burgeoning dress business off the ground. Meanwhile, on something of the same level, the Prince (Nicholas Galitzine) isn’t thrilled about the meat-market Grand Ball his parents insist on throwing for him so he’ll find himself a proper wife. Still, many of the old familiar tropes are here. The Ball. The Prince. The Neglected Stepdaughter. The Glass Slipper. The Pumpkin Coach. The Footmen. The White Horses.  The Friendly Mice. The Stroke of Midnight.

It’s all fine except…. aside from a few costume touches and the charm of its leading lady and the regal bearing of stepmom Idina Menzel (“Frozen’s” princess to you and me), this “Cinderella” is also a bit flat. In its embrace of the up-to-date and oh-so-cool, the story has lost its most essential fairy-tail ingredient: the power and magic of true love.

So, yeah, the Prince and the Pauper get together. And her dream comes true (a dress business) and his dream comes true (no designated Mrs., Prince he abhors) and everyone in the kingdom, um, wakes up a little and…

No harm. No foul. Not much else either.

“Cinderella” is available on Amazon Prime as well a limited release in theaters.