A circular journey into one’s soul through an Atlanta labyrinth 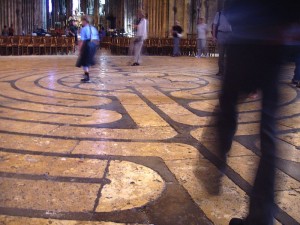 The labyrinth at Chartres Cathedral in France.

The emblem of a winding path bound by a circle caught the attention of the convenience store clerk. “It’s a maze,” she said, smiling and pointing at my T-shirt.

“What’s the difference?” she asked.

I paused. How could I explain the power of what looked to others like walking in circles? How could I sum up my spiritual and meditative exercise for more than a decade?

I walk the labyrinth path at my church, search out others at parks and hospitals. I’ve carved them out of the sand on beaches and even mowed one in the back yard. Seekers like me have boosted the number of labyrinths within 100 miles of Atlanta. In 2000 there were a half dozen; now there are about 100.

“The point of going into a maze is to get lost, and then find your way out,” I replied. “You can’t get lost in a labyrinth—there’s only one way in and one way out.”

But I hadn’t captured why, in the pile up of job losses, family crises, health scares and a recession without end, walking the labyrinth has become more frequent and vital.

“I suppose there’ve been many times I’ve walked into a labyrinth already lost,” was the best I could muster. 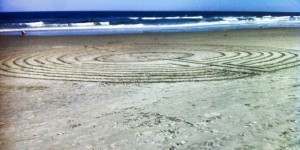 A beach labyrinth won’t exist for long, which arguably adds to its spiritual significance.

The clerk gave me a puzzled look, a reminder that describing the simple power of the labyrinth is almost impossible. But people across the world and over the centuries have discovered that walking the circle path can help make sense of all the craziness life deals out.

A long line of labyrinth walkers

During the Middle Ages, when Christians took pilgrimages to the great Gothic cathedrals of the time, walking the labyrinth marked the end of the trip, as the pilgrims symbolically journeyed to Jerusalem, then considered the center of the world and themselves.

Labyrinths are geometric patterns painted on floors or canvas, or, if outside, built of pavers and stones. The design appears concentric, but the path is clearly not. One enters the labyrinth through an opening in the outermost ring and then follows the path, turning dozens of times before reaching the center.

For newcomers, the path feels counterintuitive. You will find yourself close to the center, but you are still very far away from reaching it. When you are on the ring farthest from the center, you are much closer to your destination than you think.

Many walkers pause in the center before retracing their steps out. The journey out of the labyrinth can be a completely different experience than going in.

Labyrinths come in many different shapes and sizes. Some classical labyrinths have no clearly defined circular center.  Some are octagonal. They can have any number of circuits (rings) in them. The medieval Christian labyrinths typically had 11 circuits.

Many of those labyrinths eventually fell into disuse. That included the 40-foot-wide labyrinth at Chartres Cathedral in France that was covered with chairs when the Rev. Lauren Artress, an Episcopal priest visited it in 1992. She wanted to replicate the labyrinth at the cathedral in San Francisco. So she and a handful of others removed 250 chairs to walk it even though they didn’t have permission.

Many mark that moment as the start of the modern labyrinth movement. Today, visitors from all over the world travel to the Chartres Cathedral in France, to walk the same 40-foot-wide labyrinth path pilgrims followed 1,000 years ago.

Artress managed the construction of two labyrinths at Grace Cathedral in San Francisco: one outside and another inside. She also set up Veriditas, a company that sells labyrinth kits and started leading workshops on how to organize labyrinth walks. 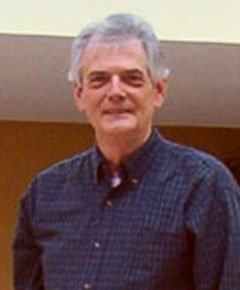 John Rhodes of Atlanta, president of The Labyrinth Society, an international organization “whose mission is to support all those who create, maintain and use labyrinths, and to serve the global community by providing education, networking and opportunities to experience transformation,” its website states.

Two metro Atlantans who were attracted to Artress’ work and the labyrinth experience were Linda Claire Snyder and John Rhodes.

Rhodes recalled being stuck in a traffic jam in 1998 near the Episcopal Cathedral of St. Philip. He saw the church’s sign inviting passersby to come inside and walk a labyrinth. Rhodes had read a story about labyrinths in the Atlanta Journal Constitution. His curiosity turned into a fascination.

On a return visit to the St. Philip’s labyrinth, Rhodes had what he called a profound “meditative experience.”

“I just had this really personal private experience,” he said. “ I just got in touch with this meditative, deeply intuitive side of me. I felt the holy spirit or whatever you could call it.”

Rhodes said his altered state was broken by a homeless woman pouring herself a cup of coffee across the large hall.

“What the hell is that thing?” she called out.

Though irritated, Rhodes explained the labyrinth and invited her to join him. She didn’t, but later he considered the interruption as a possible element of his profound experience.

Rhodes went to San Francisco to attend Veriditas workshops and train as a labyrinth facilitator. He returned to lead labyrinth sessions of his own at his church, Harmony Grove United Methodist in Lilburn.

Rhodes is now president of The Labyrinth Society, an international organization “whose mission is to support all those who create, maintain and use labyrinths, and to serve the global community by providing education, networking and opportunities to experience transformation,” its website states.

Rhodes spoke for this piece by phone from Vancouver Island, Canada during a break at the annual Labyrinth Society conference.

Another local voice on the enduring power of this practice 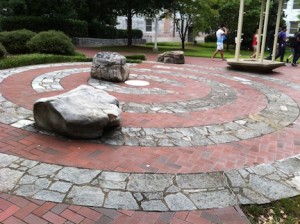 A simple labyrinth at Emory University.

There are approximately 4,500 labyrinths in 70 countries listed on the World Wide Labyrinth Locator, a website maintained by Veriditas and The Labyrinth Society. There were 800 listed on the site in 2000.

Linda Claire Snyder says the power of the labyrinth is evidenced by all the ancient cultures who have labyrinth symbols and the diversity of modern walkers.

“Different cultures had them and yet we know they didn’t talk to each other,” Snyder said. “Some people walk faster than others. Some people walk slower; there’s a lot of spiritual new age people who walk them. They (local labyrinths) are in lots of different places—a Buddhist temple, a hospital.”

Snyder and others introduced me to the practice of walking labyrinths. My first walk took place in north Georgia at a church retreat center. I had been in the same room many times and noticed the graffiti on the ceiling. But as I walked on a canvas printed with the labyrinth pattern, in silence with Gregorian chants playing, the ceiling’s names of teenaged campers and the long past dates attached to them, the rock song lyrics, and the cryptic quotes took on new significance.

“We are the people our parents told us to watch out for,” was one painted statement.

As I walked, I imagined myself transported out of the place and journeying behind other souls who had passed before me, some long before, as well as those who followed behind. I took a turn on the canvas and saw, through an open window, the familiar cross on top of a nearby hill. This symbol reminded me that I believe my journey has a destination.

“It’s a maze,” said the clerk who didn’t know this symbol was a labyrinth. Mazes are constructed to confuse people. Labyrinths have only one path in and out.

Images flashed through my mind of beauty and tragedy, of famine and war, of the people I loved and the hope of my children. With tears welling in my eyes, I felt there was some great point to all of this, though I didn’t know precisely what that point was, and probably wouldn’t ever know; and that it didn’t really matter that I didn’t know.

Some people walk labyrinths for relaxation and to focus their minds, a way to process grief, let go of a bad day, to meditate. I see them as an alternate form of prayer that is both active and passive. Instead of presenting God or a higher power with a list of requests, the labyrinth is about passive listening. Walking the path is the active part.

For someone who has struggled with anxiety and depression, the labyrinth certainly beats directionless pacing.

As often as possible, I walk into the labyrinth with a simple sentence on my lips, something that reflects my current state of mind or emotion, and repeat it quietly at several points along the way.

Then I walk out and start my life again.