Atlanta citizens are key to making and keeping our communities safe

Just as they turned the corner of Peachtree and Martin Luther King Jr. Drive, a group of downtown neighbors noticed someone rummaging through one of a pair of planters flanking the entrance to their loft building. After chasing the young man away, one of the residents discovered the booty — a bag of oxycontin pills – that was in the adjacent, undisturbed planter.

Coincidentally, as they chatted about the discovery, a police cruiser stopped at the red light outside the building. The gentleman who found the bag approached the officer and motioned for his attention. The brief exchange ended as the seemingly unconcerned officer shrugged and drove off as the light turned green, leaving at least $300 worth of narcotics on the street.

Baffled, the residents gave the painkillers to the courtesy officer in the building and chalked the incident up to another episode of police apathy in downtown Atlanta.

South downtown should be one of the most vibrant communities of Atlanta given that it is home to our local, county and state governing bodies. On the weekend, it is ground zero for public feedings. On any given day, one can walk down south Broad Street and the surrounding area and witness a drug swap, find men and women panhandling or being asked to buy a bootleg version of the latest blockbuster film — all happening a short walk from the jail and the courthouse.

There is a quiet groundswell of public concern for safety and quality of life in various Atlanta neighborhoods. From campus safety at Georgia Tech to armed robberies in the Old Fourth Ward and Inman Park, to questionable behavior by a few police officers, the series of events have alarmed many community leaders. 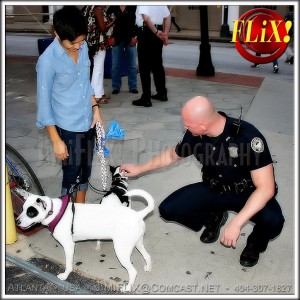 Last week, the Atlanta Downtown Neighborhood Association launched its first “Take Back Our Block” initiative. Major Wayne Whitmire of the Zone 5 precinct, Councilmembers Cleta Winslow and Kwanza Hall, officers from the Crime Stoppers unit and Atlanta Police Department’s community liaison participated in croquette, a sidewalk chalk contest and other activities while munching on burgers and potstickers from food trucks.

Downtown is the latest amongst many Atlanta neighborhoods over the years to lead its own quality of life crusade. Over a decade ago, East Atlanta residents and business owners banded together to curb a series of shootings. A local business owner was quoted in Creative Loafing as saying, “We know that the police department doesn’t have enough people.” In-town business groups such as the Midtown Alliance have successfully funded private security patrols.

During the 2009 mayoral election, public safety was a hot button campaign issue. Community leaders formed Atlantans Together Against Crime (ATAC) in response to John Henderson’s murder. Vigilant contact with the zone commanders and police majors assists these communities in getting additional resources down the road in the form of more officers patrolling their neighborhoods.

While our police retention rates are improving and the city is nearing the 2,000-officer mark — a goal dating back to Mayor Bill Campbell — public safety does not lie solely in the hands of government.

Vibrant neighborhoods are a direct result of an active citizenry taking the initiative to love their block. This model of citizen-driven activity coupled with an empowered police department can mitigate petty crime and put both small-time drug dealers and disengaged public officials and police officers on notice.

Over time, the epicenter of our local and state democracy can become the next work-live-play community rather than the “desert after five o’clock” area that it is now.

Note to Readers: Saba Long lives downtown and is a former board member of the Atlanta Downtown Neighborhood Association. She also serves as the senior council aide and Communications Liason for Post 2 At-Large Atlanta City Councilman Aaron Watson.