Atlantic Station has exceeded every realistic expectation of an urban renewal project.

In 1999, Atlantic Station was the dusty site of a shuttered steel mill. Today, through a tremendous public-private partnership, it is a city onto itself that’s claimed equally by the Midtown and Georgia Tech communities.

There’s no doubt that Atlantic Station has been a successful financial investment for both its initial investors and the city. That success is cited in a new city audit that recommends the Atlanta City Council enact stricter controls over Atlanta’s largest renewal program, which is administered by Invest Atlanta, the city’s redevelopment arm. 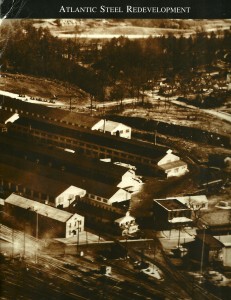 Atlantic Station is one of the 10 redevelopment areas that were examined in an audit from city Auditor Leslie Ward and the city’s Audit Committee. The audit reviewed Invest Atlanta’s management of tax allocation districts, or TADs, in which property taxes on new developments are directed to improve a community’s public amenities, such as roads, sewers and parks, in order to attract more development.

The audit recommends the city council adopt a set of controls and reports to “improve the oversight and accountability of use of public funds generated by the tax allocation districts.”

The audit was presented Monday to the city council. It is slated for discussion at the June 12 meeting of the council’s Community Development Committee.

Among all the city’s TADs, Atlantic Station is unique.

The Atlantic Station TAD was formed in 1999 to help finance a project that faced enormous complications:

The federal Environmental Protection Agency stepped in, declaring that the 17th Street Bridge could be built. EPA determined that Atlantic Station would reduce the pollution load by reducing the number of vehicle trips in the Atlanta area, according to an EPA press statement dated Sept. 9, 1999.

The city created a TAD for Atlantic Station, which provided an affordable financing tool to help pay for the bridge, remediation of the brownfield, and installation of roads, sewerage and other public amenities.

Until the great recession, Atlantic Station appeared to be moving ahead somewhat as planned. Here’s the tally sheet of progress, according to page 69 of the audit:

That’s because the initial obstacles that government-backed funding helped overcome have been resolved and may no longer present an impediment to market-based development, the audit states.

“It’s not clear that additional public investment in Atlantic Station is necessary to spur development because the barrier to private investment has been eliminated,” the audit states on page 37.

After servicing its government debts, Atlantic Station’s TAD shows a fund balance of $33.4 million, as of June 30, 2011, according to the audit.

That means the 0.3 acre of land that comprises the Atlantic Station TAD has generated enough development to have a surplus of $33.4 million. 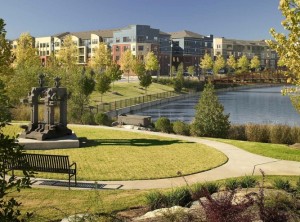 Atlantic Station has been redeveloped to the point that it may no longer qualify for funding from an Atlanta urban renewal program. Credit: Cooperativeconservation.org

The audit has determined that two financial documents, one from the city and one from Invest Atlanta, provide no specific uses for the surplus, other than for the general concept of redevelopment.

Likewise with the total pot of $226 million in surplus balances that have accrued in TAD funds – the two city financial documents list no specific use, according to the audit.

The audit notes that Atlanta has issued $636 million in bonds since 2001 to finance various parts of urban renewal developments in five regions of the city. However, limited controls appear to be in place, according to the audit:

“Most of the bond- funded projects have been completed, and the bond funds have been either spent or committed to ongoing or future projects.

“Invest Atlanta’s reporting highlights accomplishments within the districts but does not assess progress toward meeting redevelopment plan goals.”

Click here for a larger version of the chart located below. 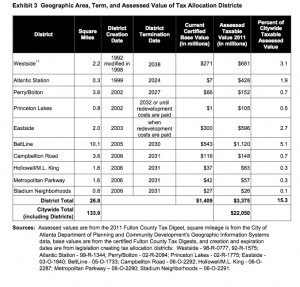 A comparison of some benchmarks of Atlanta TADs. Credit: TAD audit