The City of Atlanta is beginning to play hardball when it comes to its dealings with Friendship Baptist Church.

Up until now, the city and the Atlanta Falcons have said that it needs Friendship in order to build a new stadium on the site south of the Georgia Dome.

But after months of off-and-on talks between the city and Friendship, a significant gap remains between what the city is willing to offer and how much Friendship would like for the property.

So the city has come up with another idea. Reroute Martin Luther King Jr. Drive to Mitchell Street so that both the stadium and Friendship could be located side-by-side. 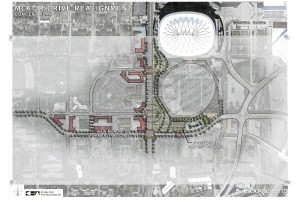 Map of how Martin Luther King Jr. Drive could be realigned to make enough room for new stadium and Friendship Baptist Church (click to enlarge)

In a memo from Duriya Farooqui, the city’s chief operating officer, to Atlanta Mayor Kasim Reed, it was clear the city was running out of patience — saying the project is at a “critical stage” and that the design work must be finalized so the project can continue on schedule.

“The negotiation with Friendship church has not yielded a resolution and no further delays can be absorbed into timeline,” Farooqui wrote to the mayor. “The offer made through the City has increased from $10 Million to $15.5 million. The asking price by Friendship Church has meanwhile moved in a direction away from an initial ask of $20 million to a recent proposal as high as $24.5 million. This leaves the gap between the two offers substantially the same since initial offers and no closer to a resolution within the timeframe a location and orientation decision is needed.”

Farooqui went on to say: “The City and the Falcons are now re-evaluating orientation options on the south site that would leave Friendship Church intact. While a move to the North site accomplishes the same objective, the south site feasibility has improved on other dimensions and it continues to be a location that the Falcons and the City support. The attached conceptual plans indicate options under which Friendship Church can remain intact.”

She concluded the memo by recommending that the “City continue to support plans to build a new stadium on the South Site and evaluate the site options attached, which may not necessitate the acquisition and reconstruction of Friendship Church.”

Lloyd Hawk, chairman of Friendship’s board of trustees, said Wednesday evening that the church continues to be open to sit down and negotiate with the city. He also added that the news that the stadium could be built without the acquisition of Friendship does not change how the 150-year-old church will approach the negotiations.

Rich McKay, president of the Atlanta Falcons, was asked if the team would consider getting involved in the negotiations with Friendship. He also was asked whether another alternative — to build the stadium on a site a half-mile north of the Georgia Dome along Northside Drive — is still on the table.

“The city is leading the discussions with Friendship, and we don’t want to get in the way of that,” McKay responded in an email. “(The) North site is still an option.”

It does seem as though the clear preference is to build the stadium on the South site, which is between two MARTA stations — the Vine City MARTA station and the Dome/GWCC/Philips Arena/CNN MARTA station.

But even if they can build the new $1 billion stadium with Friendship, the Georgia World Congress Center will need to acquire Mount Vernon Baptist Church, which is located just south of the existing Georgia Dome. The state is handling those negotiations.

The Atlanta Falcons have said that they need to know about whether the South site will work by Aug. 1.