For the first time in its history, the city of Atlanta has completed an in-depth study of its ecology as a way to help protect our natural environment while anticipating a greater growth in population and density.

“This study assessed the unique natural conditions of Atlanta and devised a plan for how we best protect our ecosystems, restore their function, and accentuate their importance with urbanism,” wrote Tim Keane, Atlanta’s city planning commissioner, in the opening letter.

“We recognize that natural condition of Atlanta is an essential part of Atlanta’s identity. However, it is much more than that. The extent and health of our forests, streams, and wetlands are much of what makes this city habitable. Atlanta’s priority of adapting to a changing climate is dependent on how we care for the natural systems that were here before us,” Keane continued. A growing city, as envisioned in Atlanta City Design, requires that nature flourish even as we become denser and more urban.”

The study included several ambitious recommendations to fulfill the conceptual goal of Atlanta City Design of “how we can design for people, for nature and for people in nature.”

One of the more significant recommendations was to increase the amount of natural buffer along Atlanta’s major waterways.

The current city code requires a 75-foot, natural, undisturbed, vegetative buffer on both sides of streams. Several of Atlanta’s creeks – Utoy, Sandy and Nancy creeks – have some o the most intact forest in the city. Other rivers and creeks would benefit if they had “more robust” vegetation.

“Going beyond the 75-foot required buffer, research has shown that 300- foot wide forested stream buffers, on both sides of streams, are correlated with higher ratings of stream and riparian habitat than narrower buffers,” according to the study. “In urban areas, a larger buffer also provides greater flood protection, wildlife habitat, and pollution reduction.” 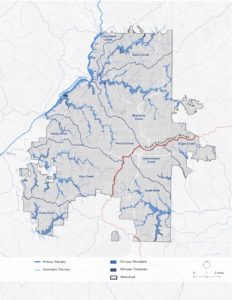 The study also pointed recognized that much of Atlanta’s natural environment is unprotected because it is privately owned.

“Most of the city’s tree canopy and highest value habitat is on private land,” the study stated. “This makes forms of ecological protection on private land such as regulations for floodplains, stream buffers, wetlands, tree protection, and areas protected under the Chattahoochee River Corridor Metropolitan River Protection Act critical to preserving the ecology of the city. Stewardship of the city’s urban habitats by private residents is also vital.”

The study also highlighted Atlanta’s desire to have a city park within a 10-minute walk of every resident. Areas outside of a 10-minute walk are called “park deserts,” and “large sections of northwest and southwest Atlanta have forested land that provide important ecosystem services, however, those resources are primarily on private land, and are not accessible to the public.”

The study recommends acquisition of land with “high-value habitat” and restoring Atlanta’s forest habitat throughout the city. It also recommends increasing Atlanta’s tree canopy to 50 percent (as of 2014, it was 47.1 percent) by prioritizing diverse native species and planting more trees along the streetscape, particularly in the developed core of the city. 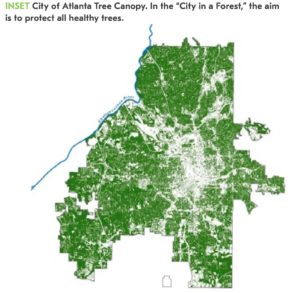 Ideally, the implementation of a new tree ordinance would provide greater protection for trees by encouraging developers to consider tree preservation in the pre-planning phase of their developments.

Among the recommendations was integrating green infrastructure for stormwater (think Historic Fourth Ward Park) and having more green roofs and living walls.

It is especially important to restore habitat and develop parks within socially vulnerable communities. The study recommends the city work across departmental lines to implement Atlanta City Design: Nature (planning, parks and recreation, watershed management, public works, and the Office of Resilience). Efforts also should be made to work with other governmental entities – Atlanta Public Schools, Georgia Department of Transportation and other state, federal and local agencies as well as conservation organizations and other nonprofit groups.

The study celebrated the acquisition of the 216-acre Lake Charlotte Nature Preserve in the South River Park area – one of the largest acquisitions in the city’s history. It said the city should seek public and private support to acquire additional areas of unprotected forest.

The study also recommended that the city consider creating a Park District or Parks Authority, a move that would require state legislation – especially if it would have a dedicated funding stream.

The city also is working on its next five-year Comprehensive Development Plan, and efforts are being made to integrate the goals of the Atlanta City Design in all aspects of the city’s plans – including the Nature plan, a transportation plan, the city’s housing strategy, a new zoning code and a stronger historic preservation plan.

In some ways, the Atlanta City Design is turning into the ultimate balancing act – seeking to create a city that has it all – quality growth while maintaining its natural beauty and keeping it affordable for all. 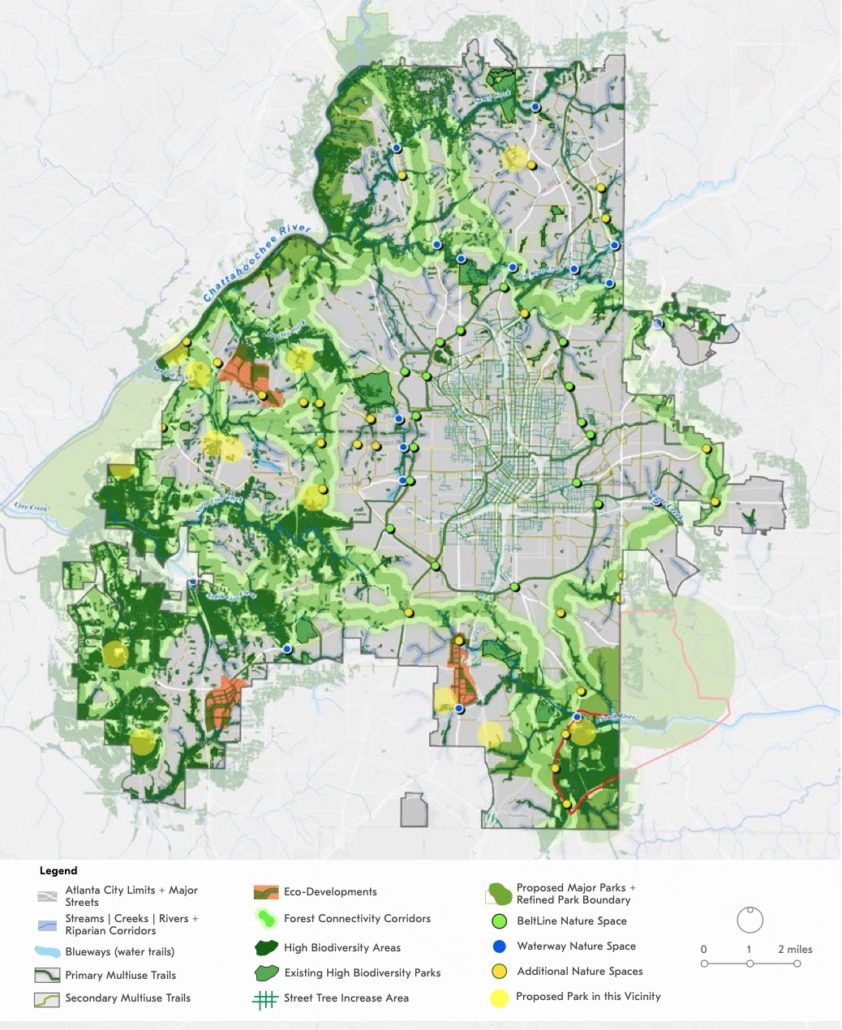