When it comes to creating a sense of place, the three-year-old City of South Fulton started with a blank slate – for starters, the name doesn’t refer to a previously known community. Now it has Wolf Creek Amphitheater, a 200-acre development planned along the Chattahoochee River, and a detailed economic development plan that offers a vision of a Town Center. 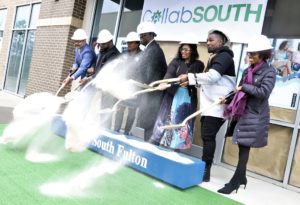 The progress has come together since the city was incorporated on May 1, 2017, even as public attention has focused on disputes among city leaders over the nuts and bolts of municipalization.

In contrast, Sandy Springs has largely avoided a harsh limelight as it abandoned a central principle of its incorporation in 2005: The privatization of staff and facilities to lessen the taxpayer cost of local governance.

Sandy Springs announced in 2019 it was shifting a host of personnel from contract basis onto the city payroll. The move is expected to save $14 million over a five-year period. City officials previously had decided to move from leased office space into a mixed use City Hall facility priced at about $225 million. As Sandy Springs City Manager John McDonough said in the statement: “The competitive market works.”

Two of South Fulton’s development initiatives have the potential to unfold in the near future. The third, the potential Town Center, would take some five years to develop and is in the category of long range projects, according to the economic development plan presented in January by Mary Burkholder, vice president of bae urban economics. The firm has offices in five cities, none in metro Atlanta.

Here’s a snapshot of three significant steps in the City of South Fulton:

South Fulton is to take possession of the facility from Fulton County on Dec. 1. The venue joins two other arts facilities the city acquired from the county, the Southwest and South Fulton arts centers. The amphitheater represents the type of risk the city is willing to take during its formative stages. 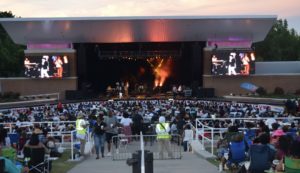 Wolf Creek Amphitheater, with its 5,300 seats and 435 acres of wooded land, is to become a focal point of the City of South Fulton when the city acquires it Dec. 1. Credit: wolfcreekamphitheater.com

Fulton County has struggled for years over what to do with the facility. The amphitheater should have been, but wasn’t, at least a break-even entertainment venue: It’s comparable in scope to Atlanta’s Chastain Park and accommodates 5,300 guests with reserved and table seating, and green lawns.

Problems were documented in a 2016 audit that reported 25 improprieties, plus the diversion of cash to a church for overflow parking at events where tickets were oversold. Nonetheless, South Fulton Mayor Bill Edwards said in a statement:

A 200-acre mixed use development is planned along the Chattahoochee River on a 200-acre site purchased in December 2019 by a Norcross-based company, United Consolidated Master. Fulton County tax records indicate the company paid $2 million for the site. 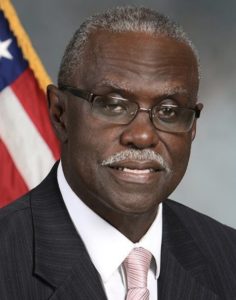 The development could be complete within two to three years, according to the economic development plan. The city’s plan doesn’t name the company.

The plan does describe the potential project as a, “high-density, mixed-use development, including walkable blocks and streets with shopping, restaurants, residences, common spaces and public access to the river.”

South Fulton’s potential Town Center is envisioned in the economic development plan as a mixed use district to be built through a public private partnership, under the guidance of consultants experienced in such projects.

The district would follow the pattern of such areas in metro Atlanta, including Sandy Springs – a government complex surrounded by public spaces, parking, a mix of commercial and residential developments.

A potential site, of 600 acres, is outlined along Camp Creek Parkway at the intersection with Enon Road. The plan offers this observation of the project: 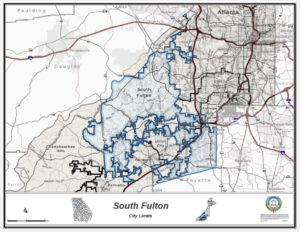 The City of South Fulton was incorporated in 2017. It encompasses the last bit of Fulton County that had remained unincorporated. Credit: South Fulton