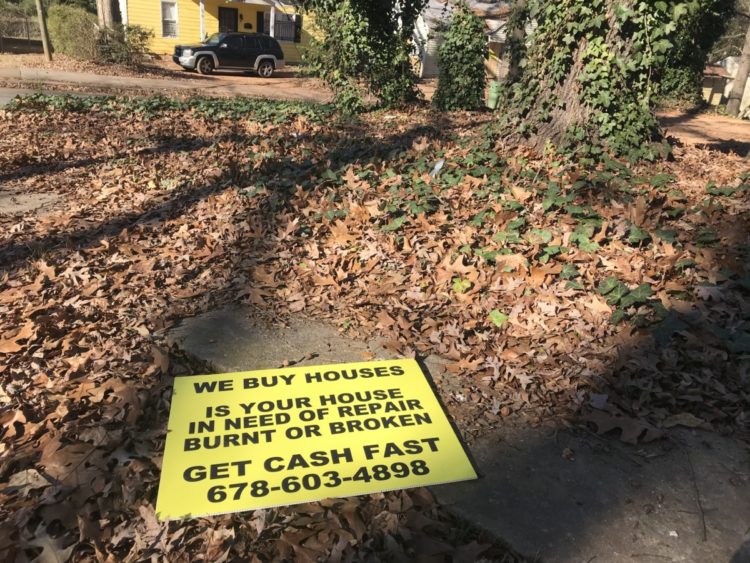 Some areas of the West End neighborhood abound with 'get rich quick' offers if they only will sell their homes, which are located along the Atlanta BeltLine. Credit: David Pendered

Crytocurrency doesn’t have a thing on real estate along the Atlanta BeltLine when it comes to the adrenalin rush of speculative investing. The city’s proposal to demolish four derelict houses reminds of that, along with the tatty condition of some dwellings in BeltLine neighborhoods that are supposed to be poised for a gold rush. 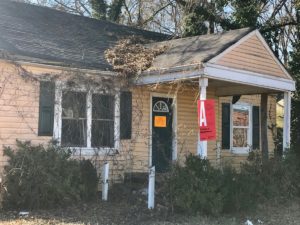 This house at 984 Donnelly St. is to be torn down because Atlanta officials have determined it is a threat to public health and safety. Urban campers appear to have gained access by removing the cover from a crawl space on the side of the house. Credit: David Pendered

The wild swings of crytocurrency are so well reported that they barely merit mention. Suffice to say that Ripple (XRP) was priced at 25 cents on Dec.10, 2017. As of Sunday at 6 p.m., the price had shot to $3.36, according to market watchers including coingecko.com, which provided a 90-day price chart. The price could plummet at any time, some financial advisors caution.

Wild fluctuations in property values along the BeltLine have been just as well reported, in their own right.

Most often, the issue of BeltLine property values appears in the context of rising values that are crimping the present and future supply of housing priced at anything close to affordable to folks earning the salaries of public school teachers.

Not to mention the related question of how homeowners, and good-hearted landlords, in blighted neighborhoods will be able to afford taxes on properties that balloon in value as investors purchase neighboring properties. These speculative prices are forecast to be sky high in comparison to prices in the PBE – as in, Pre BeltLine Era – and drive up tax values on nearby properties.

The four pending demolition permits remind that the rising tide of property values along the BeltLine has not floated all boats. In this particular neighborhood, former homes are surrounded by others that have boards over windows and doors, and paste-it placards notifying that the fire marshal has declared them unsafe. Several crawl spaces are not covered and some boards over doors have been pried free, clear indications that folks break into the houses for whatever purpose. 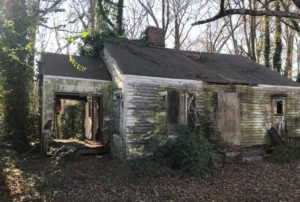 There does not appear to be a sign to indicate that demolition is in the future of this house adjacent to the one at 984 Donnelly Ave., which is to be torn down by order of the city. Credit: David Pendered

This is the situation in the Bush Mountain area  of Southwest Atlanta, located west of Lee Street/U.S. 29 and midway between West End and Oakland City. This is one of the city’s anticipated Ground Zeroes for the cornucopia of urban renewal envisioned to accompany the BeltLine, which runs adjacent to Donnelly Ave., with two pending demolitions, and the redevelopment of the former Fort McPherson by filmmaker Tyler Perry.

Despite the stark blight and pending demolitions, the neighborhood is dotted with promises of milk and honey. Apparent investors have hung an abundance of signs that deliver a similar message to homeowners in this land of boarded-up windows and doors: “We Buy Houses … Get Cash Fast.”

The house at 984 Donnelly Ave. is slated for demolition and is a great example of the boom-bust in some intown neighborhoods.

Not only is this house in shabby shape, it actually has more curb appeal than the one next door – one that’s covered with mold, and displays a bowed roofline and a see-through room. There’s no indication of the fate of the neighboring house.

The price of 984 Donnelly has been on a familiar roller coaster. 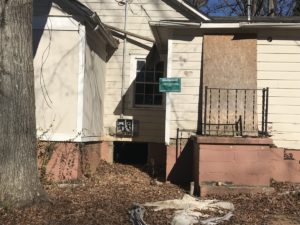 Urban campers appear to have found their way into this house at 1094 White Oak Ave., in the West End, by prying open access to a crawl space and plywood that once sealed a doorway. The green sign says the fire marshal has declared the property unsafe. Credit: David Pendered

Around the corner from these houses is 1094 White Oak Ave. It appears to be crying out for demolition. A mildewed, wooden walkway that appears to be a ramp for a handicapped person suggests its days of service as a home are long ago.

The notion that its scraped site could serve as a pad for another dwelling is lifted by a house being built across the street, and a tidy looking house next door to the construction site.

But looks aren’t everything in this neighborhood.

The tidy looking house appears to be move-in ready, once boards are removed from windows and the front door. The two-story structure seems sturdy.

Then the side comes into view. The roof, soffit and siding look as though a giant hammer bashed them to pieces. Closer review suggests fire claimed this part of the structure. 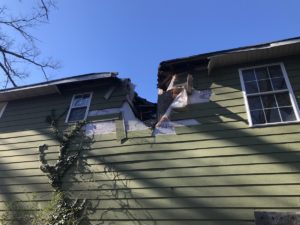 From the front, this home at 1089 White Oak Ave. looks like a reasonable fixer upper. The view from the side suggests significant work would be required to bring it back to a safe condition. Credit: David Pendered

Two notices are pasted to the front door:

Atlanta’s Urban Design Commission is slated to consider the four requested demolition permits at its meeting Wednesday afternoon, in the council chambers at Atlanta City Hall. 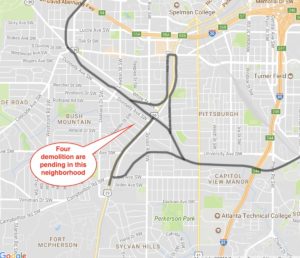 The dark gray line shows the path of the Atlanta BeltLine. Atlanta intends to demolish a total of four houses in a neighborhood where boarded-up houses are common, despite the economic boom that’s expected to accompany the BeltLine and redevelopment of Fort McPherson. Credit: beltline.org, David Pendered 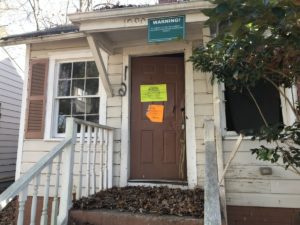 This house at 1090 Peeples St. would appear to be a candidate for restoration, though warnings appear in the signs saying it is an unsafe structure. Credit: David Pendered 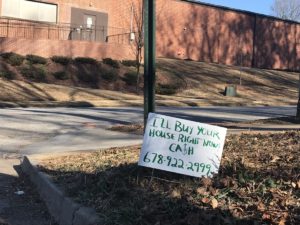 Signs offering easy money for an older home in West End is one reason the city provides materials that help homeowners understand the pros and cons of selling their property in areas that may see rapid price hikes. David Pendered 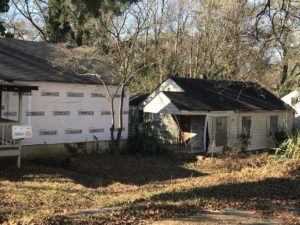 Dreams of profits and providing for homeownership in the West End coexist next to a house that the fire marshal has declared unsafe. Credit: David Pendered 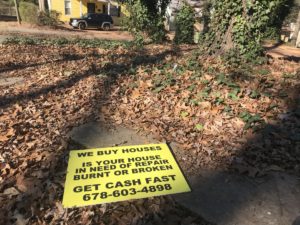 Some areas of the West End neighborhood abound with ‘get rich quick’ offers if they only will sell their homes, which are located along the Atlanta BeltLine. Credit: David Pendered