The ball is officially rolling on proposals to create one or more cities in northern DeKalb County.

Two DeKalb lawmakers filed legislation Monday that starts the two-year process of determining the feasibility of one or more new cities. If any of the proposals are deemed appropriate by the Legislature when it reconvenes in 2014, voters of the proposed cities could vote to incorporate their area as early as Sept. 16, 2014.

The general borders of the area to be reviewed are, roughly, I-85 to the west; North Druid Hills Road to the south; and I-285 to the north and east – except that the review will include part of the community of Tucker, located north of I-285.

Although Millar’s address on the Senate website is Atlanta, he is generally regarded as representing Dunwoody. Millar worked diligently to pass the legislation that enabled voters to cast ballots in 2008 to create the city of Dunwoody. 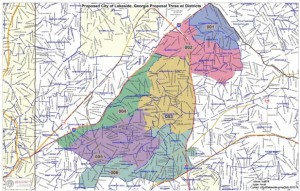 Millar’s bill calls specifically for a city of Lakeside. Senate Bill 270 delineates all the powers, duties and property tax limit of a new city of Lakeside – a ceiling of 3.04 mills, unless residents vote to increase it. The bill calls for a vote on incorporation on the third Tuesday of September 2014.

Lakeside advocates have a website that says the group formed as a non-profit to evaluate the possibility of creating a new city.

Oliver’s bill is much more generic than Millar’s. House Bill 665 simply states that a new city be incorporated in DeKalb County.

Oliver issued this statement Wednesday on the House website:

Two cities have been created in DeKalb in the past five years – Brookhaven in 2012 and Dunwoody in 2008. The vote in each community was overwhelmingly in favor of incorporation.