The Woodruff Arts Center board of trustees on Monday unanimously named Virginia Hepner as its new president.

Hepner, a banker by training, is no stranger to the arts. She spent 25 years with Wachovia Bank before leaving in February 2005 — serving as executive vice president and senior managing director of U.S. Corporate Finance and as co-head of the U.S. Industries in the Corporate and Investment Banking Division following Wachovia’s merger with First Union.

Always passionate about the arts, Hepner served in several interim director roles. She was interim executive director for Brand Atlanta during the administration of Mayor Shirley Franklin.

In 2009, she served as interim executive director for the Atlanta Ballet, where she launched a strategic planning effort and oversaw the completion of an $11 million headquarters facility.

And from October 2010 to August 2011, Hepner served as interim director for Young Audiences, one of the four divisions of the Woodruff Arts Center. In that role, she led its operations and advanced arts education across the center’s other divisions — the Atlanta Symphony Orchestra, the High Museum of Art at the Alliance Theatre. 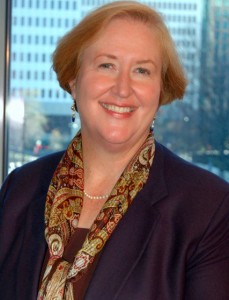 Hepner, who will begin her new role on July 1, succeeds Joe Bankoff, who has been president and CEO of the Woodruff Arts Center since September 2006.

“We just feel very lucky to have been able to get Virginia,” said Larry Gellerstedt, chairman of the center’s board who is CEO of Cousins Properties. “If you look at Virginia’s background, it’s just a fantastic fit. She knows the community very well. And she is very well respected. We feel very fortunate that we were able to get Virginia to do this.”

Gellerstedt said Hepner’s background in banking, finance and management combined with her passion for the arts made her an ideal candidate for the position.

Hepner also is the first woman to run the Woodruff Arts Center in the organization’s history.

The center’s board conducted a national search with the pro-bono help of consultant Joe Goodwin. Doug Hertz, president and chief operating officer of United Distributors Inc., chaired the search committee. The board chairs of each of the center’s four divisions also served on the committee.

The search consultant had in-depth interviews with about 15 candidates before narrowing the list to four finalists.

Gellerstedt said the fact that Hepner has been an active part of Atlanta’s business and arts community was a big plus.

“We knew that if we could find a leader that came in with the benefit of already knowing our community and understanding the area, that would be a bonus,” Gellerstedt said. “It cuts down the learning curve so much. Virginia was the strongest candidate among the contenders nationally. She’s just a great outcome for us.”

Hepner said she is delighted to be able to lead the Woodruff Arts Center through its next chapter.

“It’s an institution that’s as important as any in the Southeast,” said Hepner, who calls herself “a business person with a passion for the arts.”

At 55, Hepner said “this is a good time in my life to take this position.”

Hepner has held a number of leadership roles in the community. She currently serves on the boards of the Community Foundation of Greater Atlanta, the Paideia School and its endowment board, and the Penn Institute for Urban Research. She is a member of the Service Advisory Board for Atlanta Mayor Kasim Reed. She also serves on the Alliance Theatre’s Advisory Board, the Emory University Board of Visitors and the International Women’s Forum.

She was a member of Atlanta Mayor Shirley Franklin’s Task Force on public funding for the arts, and received the mayor’s Phoenix Award for community leadership. She co-chaired the Atlanta Firms Committee of the Woodruff Arts Center Campaign.

Most recently, she has been a strategic business consultant, a partner in a private real estate investment entity and a director of State Bank & Trust Company and State Bank Financial Corporation. She earned a bachelor’s degree in finance from the Wharton School of the University of Pennsylvania, and a Masters in Business Administration at the Kellogg School of Business at Northwestern University.