When a kicker comes on for a field goal or extra point, a football game takes on the feel of a dive meet or golf tournament. All eyes are on one athlete, and scoring the points are almost all on him. In all of sports, kicking is one of the most mentally demanding roles.

That scenario is never easy for a coach like Clay Cox, in his 10th year training the kickers at Greater Atlanta Christian. He’s nervous, remembering when he kicked at their level for Western Carolina. On the sideline, he can only hope he’s prepared them well enough to succeed.

On Friday night at Avondale Stadium, his butterflies were “100 times worse,” he said. The kicker was his oldest son.

Each time the GAC Spartans scored a touchdown, the Columbia High School marching band cranked up its mighty volume to try to ice Connor Cox.

That wasn’t going to work with the new fortitude instilled in Connor by his new team – the U.S. Army. 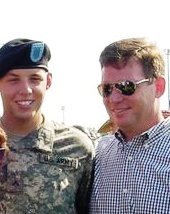 In the past year, both father and son have made tough choices to push their mental game even farther, to challenge their limits and “find a way to serve,” their family motto.

For Clay Cox, a former state representative (R-Lilburn), the challenge began a year ago. He told the struggling Spartans that if they made the playoffs, he’d try out for a professional team.

“I always thought that I had one season left in me,” said Cox, 43, whose senior year playing in college ended prematurely after he developed cellulitis in his right foot, the one he kicks with.

The Spartans did make the playoffs, and Cox did try out for the semipro Atlanta Chiefs, who play in the Gridiron Developmental Football League (GDFL), with home games at Riverwood Charter High.

“I fully expected them to pat the old guy on the head and send me on my way,” Cox said. “Instead, they asked me to come back.”

While Cox was playing all 10 games for the Chiefs, Connor Cox was living his own dream. In the fall of 2010, as his GAC team was pushing itself to the playoffs, he decided to enlist in the Army.

He had heard about the “split option,” which sounds like a football offense but is the Army’s carrot to qualified 17-year-olds: Enter basic training, then return to high school and get a big chunk of college aid while serving in the Army National Guard through college.

Connor dreamed about joining the Army like other boys fantasize about the NFL. He dressed up like a soldier every Halloween. He admired his maternal great-uncle and great-grandfather, both Army officers who combined to serve in World War II, Korea and Vietnam. “I love America and want to do something for my country,” he said. 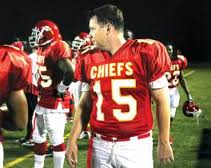 After losing a bet when Greater Atlanta Christian’s football team went to the 2010 playoffs, Clay Cox – also a former state reprentative - had to try out for the Atlanta Chiefs semipro football team. At age 42, he competed as their kicker in all 10 games of the summer 2011 schedule. (Photo by Stan Gaye)

His conditioning from football helped him survive 10 weeks of basic training at Fort Jackson, S.C. His experience from the Army helped him when he returned for his senior football season.

“This season, it’s going to take more to rattle me,” Connor said. “If I don’t get rattled by drill sergeants, I’m not going to get rattled by loud music. I’m used to intense environments now. Mentally I’m a lot stronger.”

While son was at basic training, dad was basically doing what he had trained for all his adult life – kicking the football, this time for the Chiefs, with teammates half his age.

They called him “Touch of Gray,” “Senator” (for his government service) and “Brett Favre,” for the famously unretired NFL veteran. Clay Cox didn’t face any game-winning field goal situations, but on several occasions he did kick an extra point that put the Chiefs ahead.

“We always say to our boys that we, as a Christian family, have a mandate from Jesus to serve, and that can look like a lot of things to a lot of people,” Clay Cox said, admiring his son for finding and signing up for the Army split-option program.

Though apart most of the summer, father and son drew upon each other’s inspiration to meet their new challenges.

“It was awesome that he did this, and that’s what I want to do at his age,” said Connor, who made it back from basic training to see his dad kick in the final Chiefs’ game Aug. 20. Clay Cox flawlessly handled the kickoffs and extra points, but the Chiefs lost and missed the playoffs.

Connor Cox graduated from basic training at Fort Jackson, S.C. earlier this month, and his younger brother Carson celebrated with him. Both are sons of Clay Cox, a former Georgia state representative who coaches his sons in football at Greater Atlanta Christian. (Photo by Clay Cox)

The Cox men’s summer of adventure segued into their high school football season, where they are joined by younger son Carson, a freshman offense lineman at GAC.

“What’s really neat is that Army Basic Training has helped Connor with his core strength, flexibility and mental toughness, and he’s incorporated that into our practice because the same methods that make better soldiers make better kickers,” Clay Cox said. “For me, playing again helped me so much with the coaching side.”

Connor believes he can make every field goal and extra point this season. “It’s a pretty high goal, but I should make them,” Connor said. “My no. 1 goal, though, is to become an officer in the Army.”

He’s confident partly because the day he returned from basic training, having not seen a football for almost three months, he played for GAC in a scrimmage game and made all four of his kicks.

Connor’s military preference right now is artillery, which makes sense for a football player trained in precision and aim.

Clay Cox admits that he sometimes fears for Connor’s safety, and prays for him every morning. The hardest part of being a parent, he says, is letting them go out on the field of life, to win, to make mistakes, to grow up.

But letting go is the only way a kicker, and a son, — and sometimes a dad — finds his own niche of service.