As Clayton County prepares to vote this autumn on joining MARTA, a recent report from the Atlanta Regional Commission shines new light on the number of potential riders who reside in Clayton County. 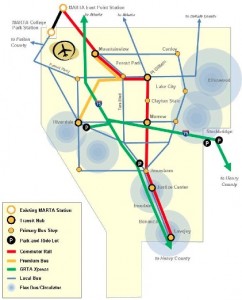 The ARC’s unofficial population estimates show the county added 1,000 residents from 2013 to 2014. That was the smallest increase among the 10 counties tracked by the ARC report.

Clayton’s population shifts will be among the factoids that will bear watching as the campaign for the 1 percent sales tax gears up after Labor Day. Clayton voters rejected a proposed regional 1 percent transportation sales tax that was on the ballot in July 2012.

In terms of average annual growth from 2010 to 2014, Clayton ranked sixth among the 10 core counties. Clayton added an average of 1,319 residents during the period, according to ARC’s report.

Clayton has been the vortex of transit promotion since the days immediately following the defeat of a 2012 referendum on a proposed 1 percent transportation sales tax. The proposal was defeated by a margin of almost 2-1.

Two weeks after voters rejected the regional tax in 2012, transit advocates appeared before Clayton County’s Board of Commissioners to call for a binding referendum to join MARTA. This call came on the heels of Clayton’s participation in the defeat of the transportation sales tax, with 53.94 percent of Clayton voters voting against the proposed tax.

Clayton’s list of projects to be funded through the regional tax included $100 million for local bus service, $20 million for commuter rail planning activities, and $17 million for a regional mobility call center and management center.

Clayton County’s Board of Commissioners authorized a transit feasibility study in January. An analysis by MARTA, posted in June, revealed, “a significant need for transit, strong public support for joining MARTA, and a willingness to support a sales tax to fund transit service.”

The MARTA report also stated: “Clayton County’s demographics and commute patterns are compelling arguments for transit services that serve the county and connect to the broader Atlanta metropolitan region.”

Clayton County had a transit service but closed it in 2010 as county revenues dwindled during the lingering aftermath of the recession.

ARC’s recent population estimate is unrelated to the county’s transit initiative. ARC is required by state law to estimate the population of the 10 core counties in order to set the dues owed to ARC by the member counties. ARC’s Board of Directors is expected to vote next week to adopt the regional population estimate, at which point the numbers will become official.