Extreme weather events are expected to become more common as the climate warms. The March 25 tornado that knocked this roof off a house in Newnan packed winds up to 170 mph. (File/Photo by Kelly Jordan.) 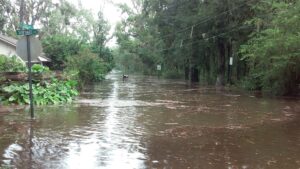 Streets flooded in a neighborhood west of Skidaway Island, near Savannah, when Shipyard Creek crested its banks during Hurricane Irma in 2017. (File/Photo used with permission by Anne Smith, an area resident.)

Climate change likely will be more than an abstract concept in metro Atlanta. Higher taxes and an influx of residents are among possible consequences as people move to escape problems elsewhere, two planners contend.

Climate migration into the region would add demand on supplies that already are problematic – from mobility to housing, from home energy to clean water and adequate sewage treatment, from public schools to public safety. Taxes and fees may be increased to meet rising demand.

The science and policy framework around climate change are the subjects of COP26, the two-week U.N. Climate Change Conference now underway in Scotland. A Georgia Tech scientist, Kim Cobb, is a lead author of a major international paper to be presented, one the U.N. secretary-general stated upon its release in August is a “code red for humanity.” 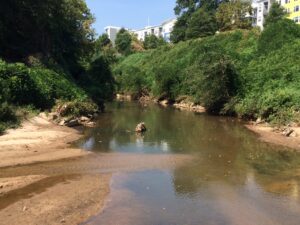 Drought is another expected consequence of global warming. The dry period in 2016 reduced water levels in the South Fork of Peachtree Creek. (File/Photo by David Pendered.)

Bruce Stiftel and Dan Reuter are among the urban planners evaluating how metro Atlanta may encounter and respond to climate migration. Stiftel specializes in collaborative governance of environmental policy and is the retired founding chair of Georgia Tech’s School of City and Regional Planning, where he remains as professor emeritus. Reuter is a planning consultant known for the growth management policies he devised for a population boom of almost 2 million residents during his nearly 20 years at the Atlanta Regional Commission.

Coastal flooding is one example Stiftel cited as a projected consequence of global warming. As flooding becomes more pernicious, Georgia policymakers will be called to act.

“Fortify or retreat, and both choices are enormously expensive,” Stiftel said. “If we choose to fortify, it would be the biggest public works investment Georgia ever made. If we retreat, we have all sorts of questions about how to handle resettlement.” 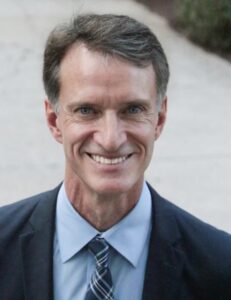 Tools to initiate resettlement away from rising floodwaters already are being installed along Georgia’s coast. Sensors that measure sea-level rise have been installed in Savannah, and NOAA has agreed to pay for them in other coastal areas of Georgia. Cobb is leading the academic team, and her practical approach to problem-solving has won support from Randall Matthews, Chatham County’s deputy director of Emergency Management.

“This program has been a partnership all the way,” Matthews said in August.

Resettlement of coastal evacuees is an example of Reuter’s focus. He brings practical experience gained in helping to provide for hurricane refugees from the Gulf Coast.

“I was at ARC for Katrina, and lots and lots of people moved to Atlanta and never moved back,” Reuter said of the Category 5 hurricane that devastated New Orleans in 2005. 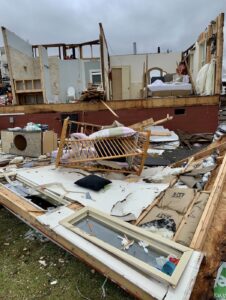 A baby’s crib is among the furniture thrown from a house in Newnan during the March 25 hurricane that brought winds up to 170 mph. (File/Photo by Kelly Jordan.)

The Katrina scenario established that metro Atlanta is a likely destination for some of those who may flee the effects of climate change, Reuter said. Whether they’re responding to the increasingly persistent flooding around cities such as Savannah and Miami, fires out West, or food insecurity in Central America’s Northern Triangle, metro Atlanta is a likely destination. The region doesn’t have plans in place for such an influx of residents.

“We understand domestic growth here, that in Gwinnett County 11,000 kids are born every year,” Reuter said. “As planners, we have to be thinking about climate change, and how we will house millions more people who may move here from other parts of the country to get away from drought, flooding, forest fires, heat, hurricanes – take your pick.”

Reuter draws parallels between planning for a pandemic — such as COVID-19 — and climate migration. Both scenarios are expected. Planning for both has been lacking. The results of failure to implement comprehensive plans during the pandemic shows the need to improve planning for migration. Reuter presented the comparison most recently at the fall joint conference of the Georgia Planning Association and Tennessee’s chapter of the American Planning Association.

“Let’s all be aware of climate change, as we were of pandemic possibilities,” Reuter said. “Be aware of the science, and what experts are saying, and the national and international organizations and some in Georgia. We are not engaged in this properly.” 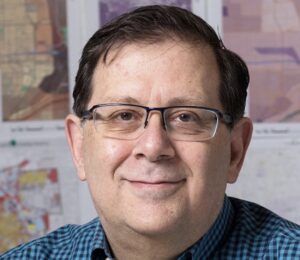 Stiftel reminds that one reason to remain engaged is the research presents a moving target.

For instance, predictions of sea-level rise aren’t etched in stone. Cobb said last week at a U.N. Atlanta event that sea-level rise along Georgia’s coast could be a meter. Cobb also showed a slide warning of a much higher potential rise globally by 2300 that read, “+6-21 feet in highest emissions scenario, but +45 feet cannot be ruled out.” 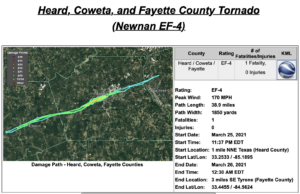 The tornado that devastated Newnan and other parts of metro Atlanta starting near midnight on March 25 traveled 38.9 miles, was about a mile wide and packed peak winds of 170 mph, according to the National Weather Service. (Image from weather.gov.)

Styftel said he holds hope that humankind can navigate solutions to global warming, through state-based efforts such as Drawdown Georgia and worldwide efforts such as the initiatives of COP26. He elaborated in an email that followed a conversation. The following is the entirety of the message:

While the challenges of climate change to a city like Atlanta are immense, we have the opportunity to avert the harmful results through the COP process and by climate actions we take here. If COP26 is successful and the Nationally Determined Contributions are revised to get us on track for 1.5 degrees C, then Georgia’s coast will not be inundated and urban heat in Atlanta will not rise to hurtful levels.

We have our own parts to play in Atlanta, of course, to contribute to reducing Green House Gas emissions. Drawdown Ga. has been outlining these pathways. We have a wonderful model for sustainable building in the Kendeda Living Building on the Georgia Tech campus. Atlanta City has a resilience plan that incorporates many forward-reaching ideas in housing, transportation and other sectors. The Ray Anderson Foundation is supporting important pilot projects.

Many private firms are reducing their own carbon footprints. And, there are all manner of technological innovations in development that could be important contributors to GHG reduction and carbon sequestration, from solar, wind, and tidal power alternatives, to electric vehicles and light individual transport.

But there is so much more we could be doing in terms of promoting transit-oriented development, bikeable-walkable communities, improved public transit, to the so-called “15 Minute City.” If these initiatives pay off the way they should, tomorrow’s Atlanta will avert the disastrous consequences of climate change, but also Atlanta will be a city that is more livable for a broader range of the population.