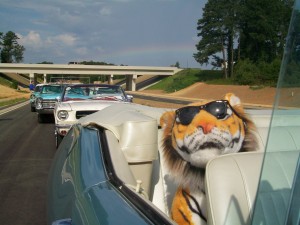 The tiger mascot from the old Esso commercials came along for a ride in a classic car during the opening ceremony of Big Shanty Road extension. Credit: Donita Newton

The new road is called the Big Shanty Road extension and the problem it solves is all too familiar in metro Atlanta – the barrier of a big road. In this case, the big road is I-75 and its construction in the mid 1970s severed old Big Shanty Road.

The project list of the proposed 1 percent sales tax is peppered with projects like the Big Shanty extension. This is one reason advocates have had such a hard time explaining how the entire region will benefit from a collection of smaller projects.

“On July 31, we have an opportunity to provide money to highly motivated people [who could provide transportation solutions] that will have the same impact on the region that this project does,” Leithead said. 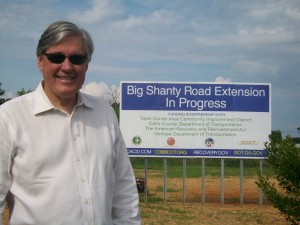 ARC Chairman Tad Leithead said the Big Shanty Road extension in Cobb County is the type of project that’s both locally important and regionally significant, and could be built in other areas if the proposed transportation sales tax is approved. Credit: Donita Newton

When I-75 was built across Cobb County, the closing of Big Shanty Road was an acceptable exchange for the access and prosperity the highway promised.

Twenty years later, the traffic was unbearable on two nearby roads that did cross I-75 – Chastain Road and Barrett Parkway. The solution was to reconnect Big Shanty Road, and the new $26 million, four-lane road stretches two miles and includes an adjacent multi-use trail that passes the new, 8,300-seat Kennesaw State University soccer stadium used by the Atlanta Beat professional women’s soccer team.

The theme of the ribbon cutting ceremony was the ’70s, the era when Big Shanty Road ended its former life. A dozen or so classic cars were rounded up to parade along the new road, just as they may have done on the original Big Shanty Road.

The Big Shanty Road extension will bisect a set of roads that form a parallelogram. U.S 41 and I-75/I-575 run basically north and south, and Chastain Road and Barrett Parkway run east and west.

The new Big Shanty Road extension cuts across the top right of this parallelogram. By tying Chastain Road into old Big Shanty, drivers will be able to continue east across I-575 to reach a third popular road that runs north and south – Bells Ferry Road.

The project was the brainchild of the Town Center Community Improvement District, which helped pay for the project. Other partners included Cobb County, state Department of Transportation, the federal stimulus package, and the State Road and Tollway Authoerity.

“Cooperation and partnership accomplished this,” said Jeff Lewis, the state DOT board member for the 11th District. “This is a great day for this area, for relieving congestion and connecting points.” 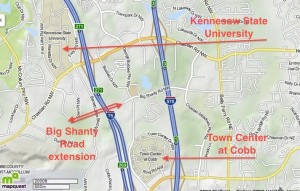 Daniel Papp, president of Kennesaw State University, predicted in his remarks that the new road will benefit students and the surrounding region.

Papp said the half-mile drive from campus to I-75 can take a half-hour because of gridlock on Chastain Road. The new road will provide an alternative route to the highway, and also to the new sports complex.

Voters in the transportation sales tax referendum could take a look at their communities and see value in their version of the Big Shanty Extension. 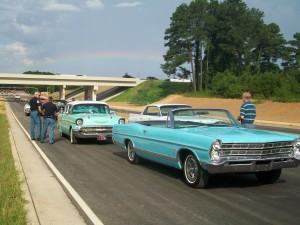 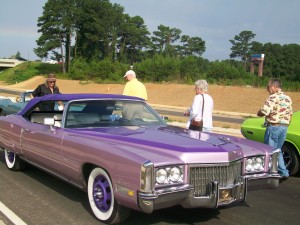 Fly rides including this one formed a parade of classic cars that joined in the ceremonial opening of Big Shanty Road extension. Credit: Donita Newton 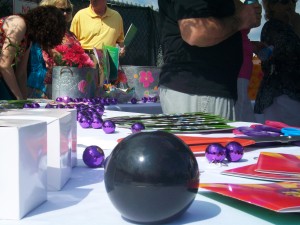 A table filled with ’70s kitch helped round out the theme of the era when Big Shanty Road continued west of what now is the I-75 corridor. Credit: Donita Newton