When it comes to sales tax campaigns, the one that begins in earnest Wednesday night in Cobb County has to rank among the most politically loaded in a long time. 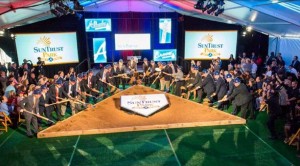 The groundbreaking for SunTrust Park, the future home of the Braves, reminds Cobb County voters of future traffic near the stadium in the Cumberland area. Credit: atlanta.braves.mlb.com

One issue that’s not being raised seems significant – almost no one is discussing the historic importance of 90 votes. There’s plenty of buzz about the Braves and bus rapid transit. But not much about the narrow approval of a similar 1 percent sales tax referendum in 2011 – a 90-vote margin for passage out of 43,014 ballots cast.

Nor is there much talk about how voters have seen many of the proposed road projects before. A fair share of the current proposals was on a list in 2012, when voters in metro Atlanta rejected the proposed regional transportation sales tax.

Cobb County’s Board of Commissioners have called a referendum on Nov. 4 for the proposed extension of a 1 percent sales tax to fund a wide array of brick-and-mortar projects – roads, libraries, senior centers, public safety, and recreation facilities.

The tax is projected to reap $750 million over six years, starting in 2016 after the sunset of an existing special purpose local option sales tax. The proposed tax would replace a 1 percent tax that voters approved in 2011 for a four-year period to fund the same sorts of county infrastructure. 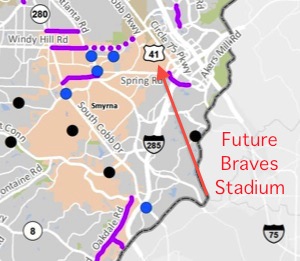 The colored lines and dots on this map represent road projects to be funded if Cobb County voters agree to extend a 1 percent sales tax. The future SunTrust Park stadium for the Braves is marked by the red arrow. Credit: Cobb County, David Pendered

Cobb County officials have spent a fair amount of time promising that certain projects won’t be funded if voters agree to extend the sales tax.

Perhaps most glaring of the public denials is the promise that bus rapid transit isn’t on the list. A proposed local match to win federal approval for BRT did appear on a previous version, but it was expunged over the summer.

In case there’s any doubt, the following message is stated three times and highlighted in yellow in Cobb’s SPLOST 2014 booklet:

The BRT proposal that isn’t to be funded would provide a bus service to link Kennesaw State University with Midtown and a similar plan appeared on the 2012 project list. The BRT program is intended to help relieve traffic congestion along U.S. 41 and I-75. Both routes are clogged now and travel times are projected to worsen through 2040 as increasing numbers of commuters from northwest Georgia funnel through the area as they travel to and from jobs in the Cumberland, Perimeter and Atlanta submarkets. 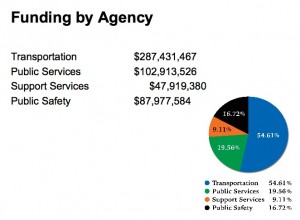 Roadway projects would be funded with more than half the proceeds of a proposed 1 percent sales tax in Cobb County. Credit: Cobb County

There’s also the matter of the Braves move for the 2017 season to the new SunTrust Park stadium in the Cumberland area. The groundbreaking last week was described as an extravaganza.

To fund the new stadium, Cobb taxpayers and the Cumberland Community Improvement District are obligated to pay $300 million – and no more than that. County officials insist that projects on the list of the upcoming sales tax referendum aren’t there just to help the Braves.

That said, the Cumberland area is in line to receive $136.4 million in projects that will improve access to, from and within Cobb’s major commercial district.

These projects certainly will assist in the accommodation of Braves fans traveling to and from the stadium on I-285, I-75 and U.S. 41:

Cobb County officials have scheduled four “information meetings” over the next eight days to present the proposal and answer questions. A county website provides the dates, times and locations.