Coca-Cola historic marker to be installed at Five Points, at site of first Coke sale 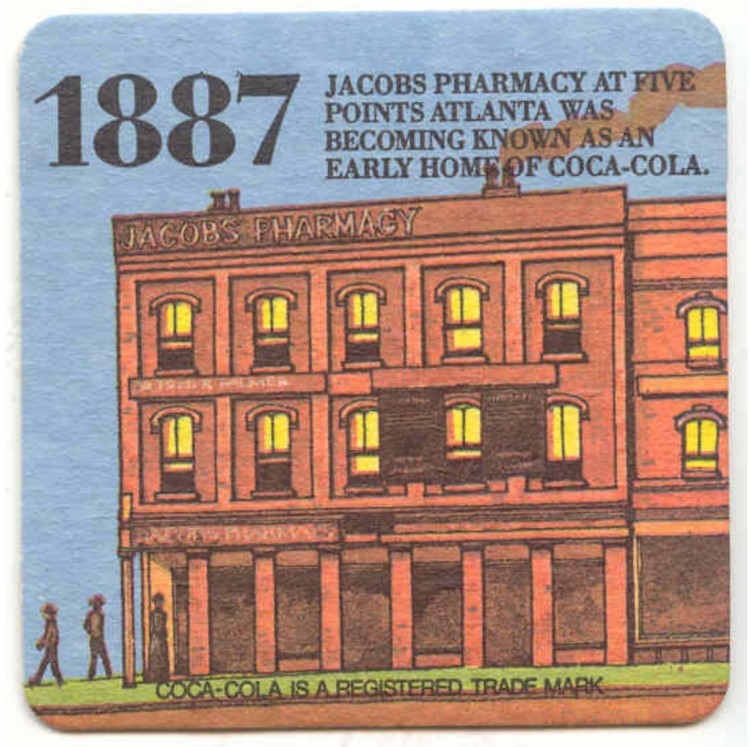 A coaster produced in the 1980s marks Jacobs' Pharmacy as the site of the first sale of a Coca-Cola beverage. Coke wants to install a historic marker at the site. Credit: pinterest.com

Downtown Atlanta, which for years was bereft of any historic signs to mark the city as the launch pad for the Coca-Cola Co., is poised to get another Coke marker to join the neon sign atop the Olympia Building. 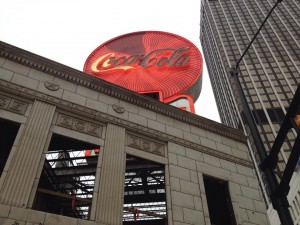 The neon Coca-Cola sign at Five Points is to be joined by a historic marker at the nearby site where the first Coca-Cola beverage was served. File/Credit: Wendy Darling

Coke has asked permission from Atlanta to install a historic marker at Five Points. The sign is to be placed at the former site of Jacobs’ Pharmacy, where the first Coca-Cola beverage was served.

Legislation that will enable Coke to install the sign in time to include it in an event in May cruised through the Atlanta City Council’s Utilities Committee on Tuesday. The committee approved it unanimously and without discussion. The full council is expected to approve Coke’s request at its next meeting, on March 7.

The building that housed Jacobs’ Pharmacy is long gone. In its place is a seven-story office building owned by the state of Georgia. The state leases the building to Georgia State University for use at the Andrew Young School of Policy Studies.

The building is located at the southwest corner of the intersection of Marietta and Peachtree streets. The sign is to be erected along the sidewalk on the side of the building facing Marietta Street, according to the legislation. 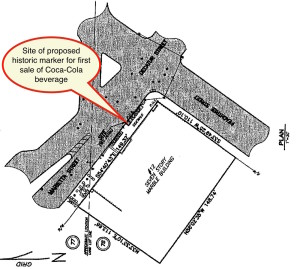 The Coca-Cola Co. has asked Atlanta to allow it to install a historic marker at the site of the first sale of a Coca-Cola beverage. Credit: David Pendered, City of Atlanta

Details of the sign aren’t publically available. But it’s been described as similar in appearance to the historic signs that are installed at various locations by the state of Georgia.

The plan for the sign will be presented to the city’s Urban Design Commission for review and comment, “if applicable,” according to the legislation.

Richard Mendoza, Atlanta’s commissioner of public works, told the Utilities Committee that the city has no problems with the sign being erected in the right-of-way that is the sidewalk.

Mendoza said the Coke filed an application for an encroachment agreement to allow the sign to be installed.

“This legislation will allow the placement of that historic Coca-Cola marker to take place for a May event,” Mendoza said. “And the waiving provisions we’re requesting with this ordinance waives the signature of the abutting property owner, which is the Georgia Building Authority.

“We’re satisfied the other provisions, including indemnification of the city for any damages to the installation and ongoing maintendance will protect our interests,” Mendoza said. “We recommend approval.” 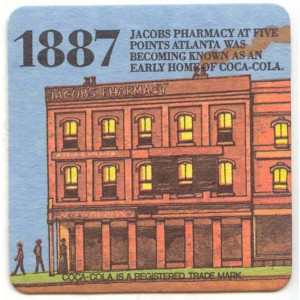 A coaster produced in the 1980s marks Jacobs’ Pharmacy as the site of the first sale of a Coca-Cola beverage. Coke wants to install a historic marker at the site. Credit: pinterest.com

The legislation notes that the sign will not impede pedestrian travel:

The paper also notes that the state does not oppose Coke’s proposal:

Gov. Nathan Deal chairs the GBA. The GBA’s executive director, Steven Stancil, sent a letter to Mendoza, dated Dec. 30, stating that GBA has no issues with the sign.