By Maria Saporta and Eric Mandel
As published in the Atlanta Business Chronicle website on Jan. 14, 2020

After its annual meeting in April, Coca-Cola will for the first time ever have nobody from Atlanta on its board of directors.

The Coca-Cola Co. said Tuesday that Ronald W. Allen will not stand for reelection to the board in April. The 78-year-old has been a director for the company since 1991 and currently serves as chair of the audit committee. Coca-Cola declined to comment about potential replacement plans for Allen on the board, which currently includes 14 directors.

Allen is the former chairman and CEO of Delta Air Lines who captained the Atlanta-based airlines’ international expansion. He also served and chairman and CEO of Aaron’s Inc. from 2012-14. He remains as a director of Forward Air Corp. and Aircastle Limited. 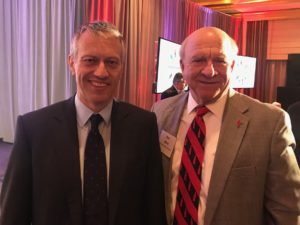 “It has been an honor to serve as a director of Coca-Cola for 29 years and to work with six different CEOs, beginning with Roberto Goizueta and ending with James Quincey,” Allen said in a news release. “I am very confident of the continued success of The Coca-Cola Company under the leadership of James and his outstanding leadership team.”

Throughout Coca-Cola’s more than 130-year history, Atlanta leaders have held significant roles on the board. That’s changed of late, with the retirement last year of then-lead director Sam Nunn, who’d served since 1997. In 2013, former SunTrust CEO James B. “Jimmy” Williams and former Coca-Cola exec Donald R. Keough retired from the board.

Quincey, who last April assumed the role of chairman in addition to being CEO, has a place in Atlanta but his primary residence has been in England.

In a emailed statement to Atlanta Business Chronicle about the company’s commitment to the city, Coca-Cola said: “Since the first Coke was served in downtown Atlanta in 1886, The Coca-Cola Company has been part a central part of Atlanta, and Atlanta has been a central part of Coca-Cola. That has never changed.

Even with an operational footprint in more than 200 countries and territories, our system proudly employs more people in Atlanta than in any single city on the globe. We’re proud of this legacy — and proud of the investments we continue to make in the city we’ve called home for more than 133 years.”

Coca-Cola is officially based in Wilmington, Del., but has its headquarters in Atlanta. Atlanta Business Chronicle previously reported that the beverage giant became Georgia’s first public company with five women on its board, following the 2018 election of Caroline Tsay.

Eric Mandel is the online editor for the Atlanta Business Chronicle.